The worst game ever: Celebrating the beauty of Northern Illinois' basketball disaster

Saturday afternoon, Northern Illinois' basketball team suffered a four-point first half and broke several NCAA Division I records for futility. Jon Bois witnessed some of it, and he is compelled to tell you all about it.

Share All sharing options for: The worst game ever: Celebrating the beauty of Northern Illinois' basketball disaster

In 1845, the British Royal Navy sent Captain John Franklin on an expedition to chart the final unexplored areas of the Northwest Passage, in the hopes that it could serve as a trade route between the Atlantic and Pacific Oceans. His ships were trapped in ice the next year, forcing Franklin and his 128 men to set up camp on King William Island. After nearly two years on the island, the crew grew desperate to return to civilization. Those still alive decided to march south on foot.

They died hundreds of miles from their destination. Over the next 150 years, several search crews re-traced their route. They found a coffin of a man, flesh near-perfectly preserved in the ice, buried so hastily that one of his shirts was buttoned on backwards. They performed autopsies and found that the men had suffered from severe lead poisoning, which likely resulted in serious mental deficiencies. They found a note, scribbled in the margins of a letter, written by someone who no longer knew what year it was. They found evidence that in the end, the men resorted to cannibalism.

I read about this expedition as a kid, and it has haunted me ever since -- in particular, the final march south. Did these men, in their starvation- and lead-induced stupors, hold the delusion that they could have made it? Or did they know their mission was futile, and simply try for the sake of trying?

These are also the questions I ask of the Northern Illinois basketball team's doings on Saturday afternoon. Against Eastern Michigan, they produced what can be fairly considered the worst offensive half of basketball in modern Division I history.

I did not watch the entire game, but I feel tremendously lucky to have witnessed what I did. 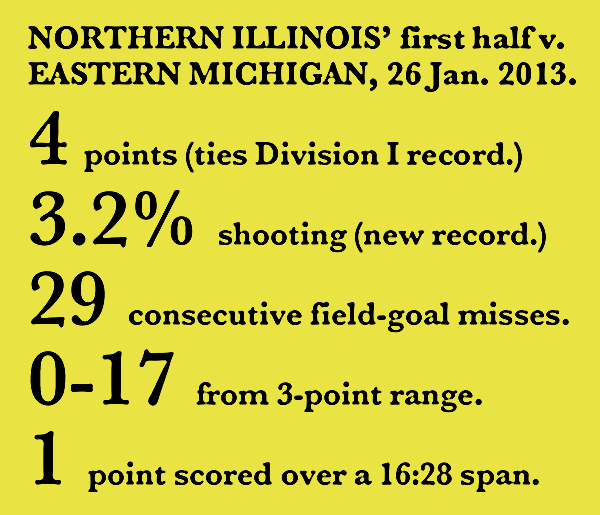 It should be noted that Eastern Michigan's defense, in terms of points allowed, is the best in the MAC. Surely, though, there was no call to attempt 17 three-pointers, which accounted for over half the Huskies' field-goal attempts in the first half.

Many things about NIU's shot selection bewilder me: firstly, that they kept going back to a shot that had failed them every single time. In fact, they closed out the half with six consecutive three-point attempts.

Secondly, this was not NIU's game. The Huskies entered the game ranking dead last in the MAC in both three-point attempts (267) and three-point percentage (.292). Their most frequent three-point shooter, Akeem Springs, is only .241 from beyond the arc. For reasons known only to God, NIU continued to shoot completely out of character, no matter how profound a disaster it became: 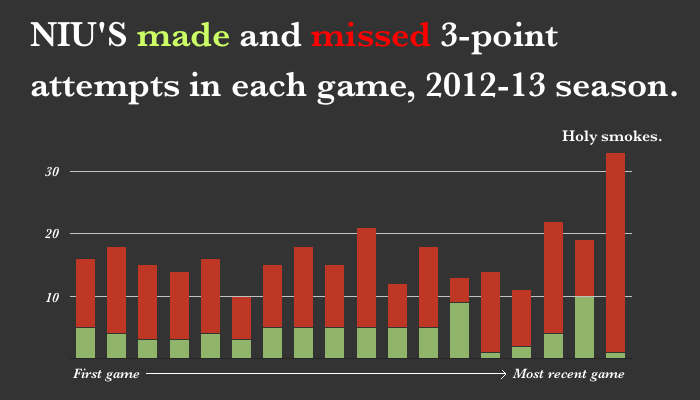 NIU's three-point crusade was particularly comical because the score at the break was only 18-4. It was unbelievable, really: a team with only four first-half points still, at least on paper, had a very real shot of winning the game. Under these miraculous circumstances, one might expect NIU to decide, "OK, we were 0-for-17 from three in the first half. Let's give ourselves a chances of winning by not doing that anymore."

That is not what they did! 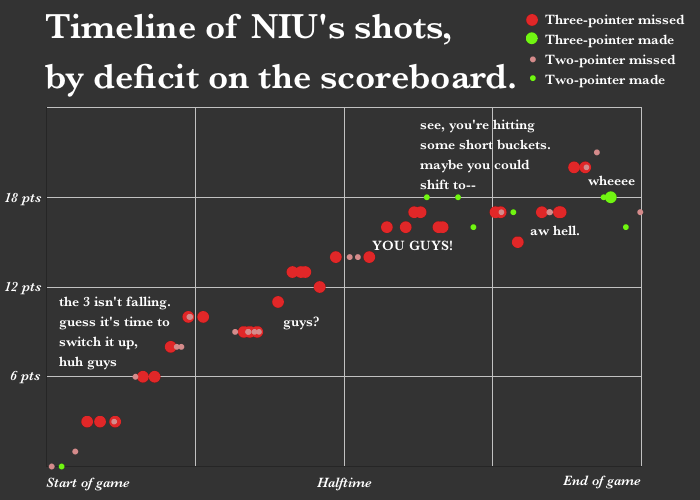 It was as though NIU forgot not only that a) they were not at all a three-shooting team in general, but that b) the first half even happened. Without hesitance, they resumed their crusade for a three-point bucket at roughly the same pace, and they finished the game with one made three-pointer in 33 attempts. The lone successful three, shot by Daveon Balls, came with only 2:05 remaining.

Northern Illinois finally started to chip in two-pointers toward the end of the game. In so doing, they lost 42-25, thereby avoiding setting a new record for fewest points in a Division I game (20, by Saint Louis in 2008). Given Eastern Michigan's low scoring output, it really wouldn't have taken much for NIU to pull out the win.

Sad Northern Illinois math that can only really be considered theoretically but is interesting nonetheless:

Northern Illinois' obsession with the three-ball could at least be understood, if not condoned, if they were seeing a lot of open looks. Such a thing is difficult to pass up, no matter how cold you're shooting. What I need you to understand is that lots and lots of these were not at all open looks. A lot of them, in fact, looked something like this:

Let's take a moment to really think about this shot.

This was not an anomaly. Contested three-balls from well beyond the arc were attempted by NIU many times throughout this game. I wish I had a shot chart to offer you. But this is a regular-season MAC basketball game, and such luxuries are unavailable. Some of it, it seems, will remain shrouded in legend.

The onus is on people who watched the game, people like me, to tell stories of the things we saw here. There is one particularly funny, sad moment that sticks out in my memory. I wish I had video, or a GIF, or a photo of this moment. My artistic gifts are not spectacular, and for this I'm sorry. But I have to share it with you however I can. 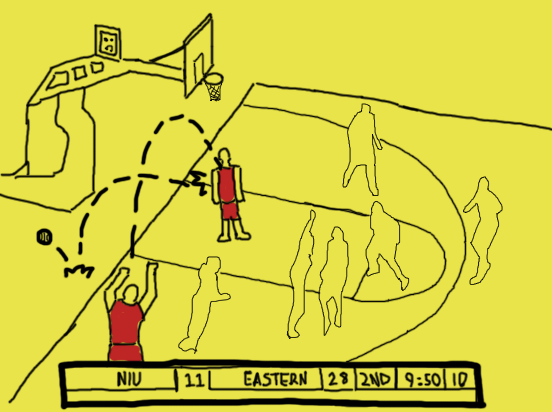 I don't remember whether this shot was contested, or exactly when in the second half it was taken. An NIU player, whose name will have to remain lost in the permafrost, put up a three-ball from the corner. It was a spectacular airball that missed the rim by a couple feet. A teammate was standing flat-footed under the net, arms at his sides, face to the play. The ball hit him square in the chest and bounced out of bounds. It was beautiful.

All of this was beautiful, do you understand? The entire game was beautiful. I hold absolutely no ill will against anyone involved in this game; on the contrary, I have immense gratitude for the performance they gave us. These things happened in a Division I game, and my feelings are rather bittersweet: I don't know whether I'll see such a miserable performance at this level of sport for as long as I live.

Remember the note found in the aftermath of the Franklin Expedition? It looked like this: 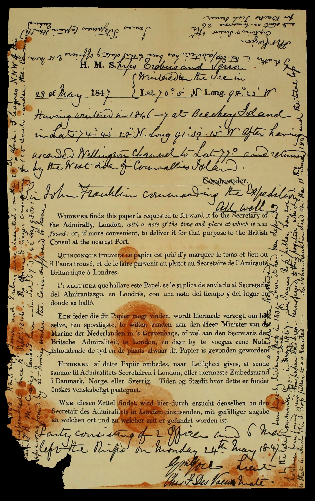 The handwriting is barely intelligible, in stark contrast to the letter originally printed on the sheet, torn and stained with God knows what. Some passages are sideways, others are upside-down. The presumably lead-poisoned author got the year wrong. I think of this when I see the game recap posted on NIU's website, as brought to my attention by Deadspin:

YPSILANTI, Mich. -- Northern Illinois posted its best defensive effort in seven seasons allowing just 42 points on Saturday afternoon, but it came in a losing effort as the Huskies fell to Eastern Michigan, 42-25, at the EMU Convocation Center.

"Best defensive effort." "Turned the ball over a season-low eight times." "Held the Eagles to just 37.1 percent." This is how NIU chose to present this phenomenally floor-shattering loss. They sailed into the Arctic, and when the ocean froze, they built a sled and called it "she."

There is one more moment I must relate to you. At some point in the second half, Eastern Michigan held a fan contest, pulling some random gentleman from the stands to attempt a series of shots. At this point, NIU had taken 30 shots from beyond the arc, and made none of them. The fan backed up to half-court, dribbled a couple times, and threw.