Share All sharing options for: BBWAA throws shutout at Hall of Fame candidates

Wednesday, the National Baseball Hall of Fame and Museum announced the results of the annual voting by the Baseball Writers Association of America, and it's not likely that the Hall's board of directors is pleased ... the BBWAA didn't elect anyone this year, which means for the first time in a long time, this summer's induction ceremony won't honor a single living inductee.

Among those shut out: Roger Clemens, Barry Bonds, and Craig Biggio, who came the closest to election with 388 votes, 39 votes short of the necessary 75 percent of the electorate. Here's a snapshot of all the candidates who received enough votes to gain a spot on next year's ballot: 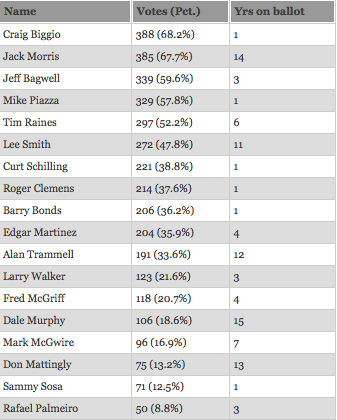 There is precedent for nobody being elected. In 1996, for example, and despite the presence of two 300-game winners on the ballot -- Phil Niekro and Don Sutton -- nobody was elected, with Niekro falling 32 votes short. A year later, Niekro alone would be elected. There simply weren't a huge number of great candidates in the middle 1990s, though; aside from Niekro, only five other candidates on that '96 ballot -- Sutton, Tony Perez, Bruce Sutter, Jim Rice, and Ron Santo -- have been elected since, and the truth is that most of those guys have (at best) marginal Hall of Fame credentials.

There's also precedent for a player like Biggio getting snubbed, his first time out. Biggio finished his career with 3,060 hits, and of course 3,000 hits has always been a magic number for Hall of Fame voters; the great majority of players with 3,000 hits have been elected immediately upon become eligible for the Hall. But not all of them. Rafael Palmeiro finished with 3,020 hits. This election was his third, and he's now farther from Cooperstown than ever, receiving only 50 votes this time around.

But of course Palmeiro's a special case. For a better example, we have to go all the way back to the 1940s. In 1944, Paul Waner collected his 3,152nd (and final) hit; at the time, he ranked seventh on the all-time list. But while Waner first became eligible for the Hall of Fame in 1948, he wasn't elected until his fifth try, in 1952.

Absent the whole steroids mess, these times are a bit like those times, with ballots just loaded with excellent candidates. In 1952, when Waner and Harry Heilmann were elected, Al Simmons and Bill Dickey finished fifth and sixth in the balloting; Hank Greenberg and Joe Cronin were 11th and 13th. But all of those men were eventually elected ... and so were literally dozens of others on that ballot. So for Biggio and many others who didn't make it this year, this is just the beginning; some of them will spend the rest of the lives nursing hopes that are not, if history's any guide, terribly unrealistic.

The other big news, of course, is that Roger Clemens and Barry Bonds both failed to garner support from even 40 percent of the voters. At this point, that situation probably speaks for itself. If you have any sympathy left in your heart, you might consider sending it toward Kenny Lofton, who (according to Baseball-Reference.com) won more games for his teams than Biggio, but has fallen off the ballot after getting only 18 votes.

There will be a wait, and perhaps a significant wait, for Biggio and everyone else who didn't make it this year. Because next year's ballot will feature Greg Maddux, Tom Glavine and Frank Thomas, all of whom are going to draw significant support (although Maddux might be the only one who's actually elected). The year after that? Randy Johnson, Pedro Martínez and John Smoltz.

This was Biggio's -- and Jeff Bagwell's, and Mike Piazza's, and Curt Schilling's, and Alan Trammell's, and Jack Morris's, and Tim Raines's, and everyone else's -- best chance for a while. For them, what's next is a lot of years hoping for a phone call that won't come.

Welcome to the modern Hall of Fame, everyone! Brought to you by drug users and baseball writers!

Crowded 2013 Hall Of Fame ballot produces no Hall of Famers