Andy Pafko, the All-Star outfielder who played on four teams that won the National League pennant but who also watched a once-sure Brooklyn Dodgers pennant disappear over a Polo Grounds wall in one of baseball’s most memorable moments, died Tuesday at a nursing home in Stevensville, Mich. He was 92.

The first-place Dodgers led the New York Giants by 13 1/2 games in mid-August 1951, but the Giants caught them. On Oct. 3, in the finale of a three-game pennant playoff, Pafko was playing left field at the Polo Grounds when the Giants’ Bobby Thomson connected off the Dodgers reliever Ralph Branca in the ninth inning for a three-run, pennant-winning home run into the left-field stands.

Captured in a long-remembered photograph, Pafko was a helpless figure pressed against the wall and looking up as "the shot heard round the world" landed a few rows above him.

The moment was "my biggest letdown ever," Pafko said.

It turned out to be the stuff of literature as well. The novelist Don DeLillo described the scene in "Pafko at the Wall," which appeared in the October 1992 issue of Harper’s Magazine. With minor changes, it became the prologue to Mr. DeLillo’s novel "Underworld," published in 1997.

Underworld is a difficult novel. I've known many who have begun reading it, but none who have finished. The good news is that for a few dollars less, you can acquire the standalone Pafko at the Wall in book form. And of course there's always the library. However you get it -- just $2.99 on your Kindle! -- Pafko at the Wall ranks among the very best things ever written about baseball. 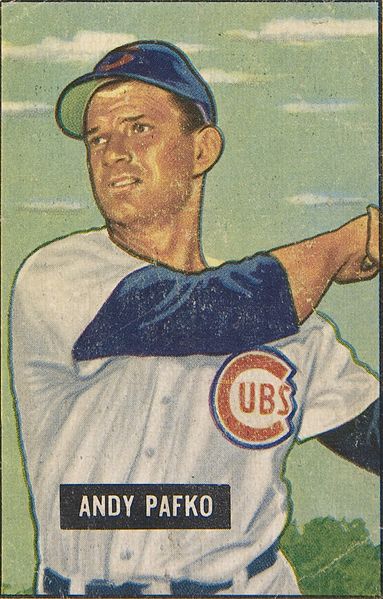 Of course, that singular image of Pafko has overshadowed the rest of a fine career. Four times an All-Star with the Cubs before his one-and-a-half-season stint with the Dodgers, Pafko later spent seven seasons with his home-state Milwaukee Braves -- he was that club's very first right fielder -- and finished his career with nearly 1800 hits.

Unlike many of the well-known players of his era, Pafko never published a memoir, and doesn't seem to have granted many significant interviews over the years. However, he wasn't reclusive, and regularly attended annual meetings of the Milwaukee Braves Historical Association. The best source for information about "Handy Andy" Pafko's life and career is his entry in SABR's BioProject.

Update: Carl Erskine, who teamed with Pafko in 1951 and '52, and pitched against him for a number of years, was kind enough to send me a few thoughts about his old teammate ...

Lots of people will tell you that Andy was a real gentleman (I don't say that about many power hitters), and of course he was the best example of a real professional. I kept in touch with him some after he lost his wife, Ellen. Many of my friends and enemies in baseball have gone to the Supreme Lineup.