The defective stuff of the the A's and Braves

Share All sharing options for: The defective stuff of the the A's and Braves

It's not exactly "It ain't over 'til it's over" or "Let's play two!", but Billy Beane's "My shit doesn't work in the playoffs," is one of the better baseball quotes of the last 20 years. The A's have been relevant for most of the last 15 years, suggesting that Beane does have shit that works at times. But in that stretch, they've made it out of the first round just once. When they did, they were swept in the next round.

The Braves' recent postseason record is even more dismal. They haven't won a playoff series since 2001. The winning pitcher in the clinching game was John Burkett. Since the start of 2000, the Braves have won one playoff series and lost eight. So they, too, have defective shit. Hope they saved the receipt.

And because these two teams have stuff that doesn't work in the playoffs, there's going to be a rush to fit the evidence to the story. The A's struck out too much against the Tigers' strikeout staff, you know. Josh Reddick and Brandon Moss … those guys strike out too much. (The A's were an above-average contact team, actually, and they struck out almost 150 times fewer this season than the Red Sox.) The Braves strike out too much in general, which kills them against power pitchers in the playoffs. (Actually … there's some evidence for that one).

But there are a few things I hate about the rush to blame a philosophy or organizational mindset. The first is that we're comparing different teams and talking about different players in different eras. Wildly different players in wildly different eras. When the A's won 102 games in 2001, they had four starting pitchers with ERAs in the mid-3s. This was considered hoarding. Pitchers with ERAs under four? My goodness, what decadence. This year, the A's had a starting pitcher with an ERA under 3.00, and he wasn't considered good enough to start more than one game in the series.

Different eras. Different roster-building techniques, too. Getting a bunch of slow, patient sluggers is an archaic philosophy. The A's these days are about crazy platoons and defensive efficiency. First- and second-year pitchers, too, which is certainly a novel way to build a contender.

So if you're going to say the A's (or Braves') shit doesn't work in the playoffs, don't you need a dozen different definitions of shit? It doesn't make sense to describe the failures of the A's and Braves in the playoffs as systemic problems. There have been a lot of systems for the A's and Braves. There have been teams built around stars, or pitching, or hitting, or some sort of paladinian compromise between the various options. It's not all fat guys taking walks, with the A's continually banging their head against the wall. It's not all control mavens tossing 80-pitch complete games for the Braves. 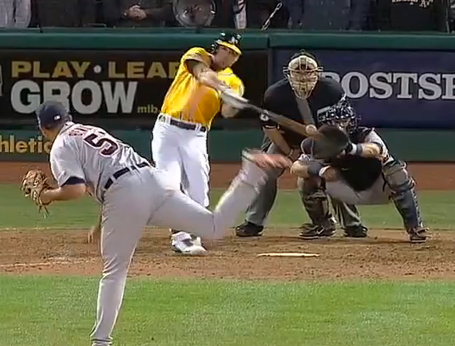 That's the last out of the ALDS, and it was Seth Smith missing a pitch, popping it up for the final out of the season. He was inches -- no, millimeters -- away from taking that pitch over the right-field wall.

And here's how close the Braves' shit came to working in 2010: 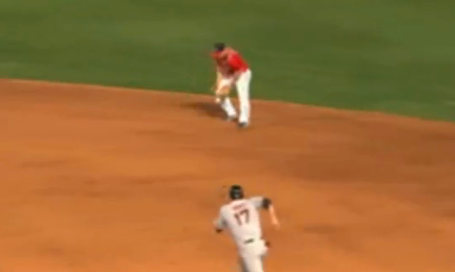 Not trying to be a jerk, Braves fans. Just pointing out that there's no way to plan for Brooks Conrad. You can make the sweetest deals and the cagiest signings, but if your utility infielder does something that every player does, but he does it at the exact wrong moment, everything is useless. Those are two cherry-picked moments. There are dozens of them in each playoff series, teeny windows of opportunity.

When the Braves won that playoff series in 2001, they had a very special reward waiting for them: Randy Johnson and Curt Schilling, the closest thing to Koufax/Drysdale as we've seen in a while. They had a strong team at the wrong time against the wrong opponents.

The A's had a pretty good hitting attack this season, based partly on their willingness to take advantage of platoons. Justin Verlander doesn't care about your measly platooning. And several times over the last few seasons, Verlander has asserted his dominance over his postseason rival. Them's the breaks. When the dust settles, Verlander will be remembered as one of the best pitchers ever, and this is part of his legacy, the whole "doing well against good teams when it counts" business.

Sometimes the other pitcher doesn't give a damn about your organizational philosophies. He's just good. And he dominates.

Blaming a team, or an organization, or a philosophy for a team's playoff failures is common, and it's silly. Ten teams are going to make the playoffs every year. Ninety percent of them are going to fail spectacularly. There will be what-ifs, why-didn't-yous, and other assorted surprises for those teams.

Looking at teams like the A's and Braves and thinking, "Well, of course they lost. That's just what they do, man," sort of skips over the part that makes baseball beautiful in the first place. Baseball is a collection of individual moments that don't have to be about an overarching philosophy. This isn't about teams figuring out how to take their opponents' rooks 16 turns in advance. Sometimes the guy expects the pitch there, and he gets it here. Or sometimes the pitcher wants the fastball here, but he puts it there. In those isolated moments, what the GM thinks is absolutely meaningless.

The Braves and A's will be back, mostly because they're impeccably run. But if you get the urge to say, "Yeah. Typical A's/Braves," just know you're crazy. Just like the playoffs. None of this makes sense. But remember that it isn't supposed to.

For more on the Braves, please visit Talking Chop

For more on the A's, please visit Athletics Nation