Fumblr: Is fandom worth the stress?

Featured in Week 6's exploration of NFL memes: surviving the stress of a close game; new highs in Manningface; and a Victorian gentleman's dalliance with the brutish profession of sport.

Share All sharing options for: Fumblr: Is fandom worth the stress?

Is NFL fandom worth it? I don't mean this in the responsible "we're cheering people getting brain damage" way. I mean it in the completely selfish "why am I volunteering for weekly heart attacks?" fashion.

That's what Nick Stevens and I discussed after we finished shooting SB Nation's War Room Live video as Sunday's games kicked off. Nick, a Pats fan, expressed angst about the Saints visiting Foxborough that afternoon, a game that, in his estimation, would be a "growler of beer and yelling at the TV."

The preparation for that feeling felt familiar: in Week 4, I spent the better part of three quarters hurling swear words at a Seahawks team that couldn't get anywhere against a voracious Houston defense. After a long touchdown drive, a Russell Wilson interception, and a Matt Schaub pick-6, I was emotionally broken with a shred of hope. After four hours of stress, an overtime field goal sealed an improbable win, and I was too emotionally exhausted to be truly happy. A win was better than a loss in the same way that your dog getting run over isn't as bad as your dog getting hit by a car and surviving.

And so I said to Nick: ha ha, my team at least has a sure win at home, good luck with that stress. And then this happened:

Seattle kickers are AWFUL at avoiding contact. Because Steven Hauschka had to undergo a concussion test after that hit (he would later return), this happened:

That's the punter, Jon Ryan, lining up for the field goal attempt. Ryan is usually the holder on field goals, which means that the holder on this particular play was Chris Maragos, an undrafted free agent originally signed by the 49ers who the Seahawks picked up, I assume, solely because Pete Carroll and Jim Harbaugh have full and happy lives stealing information from each other and reclaiming the other's discarded projects. Regardless, it was SUPER FUN to watch my team go into the half down three instead of up seven. Bonus thanks to CBS, who kindly showed the replay an extra eight times. Good times.

The Seahawks' DERP-itude would remain high throughout the game, as they fumbled three more times in the second half. Even their celebrations went awry:

Of course, the Seahawks would slowly grind Tennessee down for a closer-than-necessary win, and my Seattle-centric angst was nothing compared to the stress that Stevens and New England fans suffered.

To recap: the Pats had a ten-point lead in the second half, lost Danny Amendola and Aqib Talib to injury, allowed a go-ahead touchdown on third-and-20 with three and a half minutes remaining in the game, immediately turned the ball over on downs, allowed a field goal that stretched the deficit to four points, immediately threw an interception, then engineered a game-winning touchdown drive with 1:13 on the clock and no timeouts.

There are times when nonsense words are the only ones that fit, and the ending of that game was goddam bananaphones.

I diagrammed the text conversation I shared with Nick during the end of the game. Let's take a look at the emotional toll: 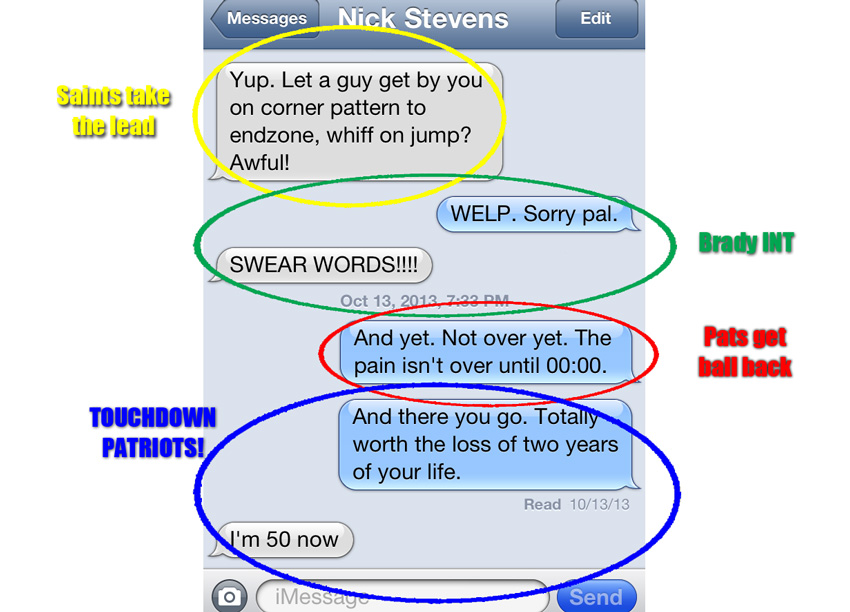 You know, Manningface just isn't the same when it happens on the same brother like clockwork every week. You can find it everywhere now. Our own Big Blue View chronicled the Giants' 0-6 season in Manningface, and even BuzzFeed did the typical GIF-heavy listicle of the phenomenon. But ubiquity is no excuse to go back on my Manningface promise, and I am nothing if not a man of honor. 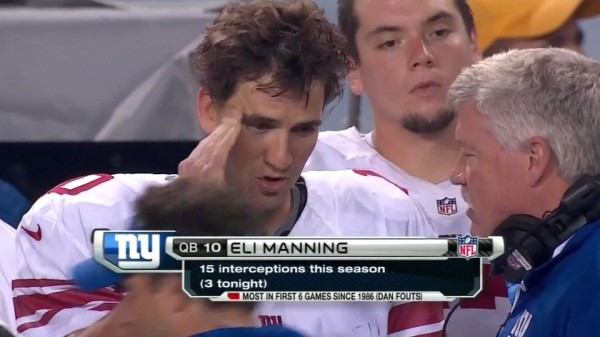 (GIFs and screencap by KSK)

For anyone who might be saying, "What's wrong with Eli Manning this year?," you're looking at it all wrong. The problem isn't Eli. The problem is that people keep measuring his performance on silly things like "quarterback rating" and "wins." The performance is his face, and 2013 is his best year ever.

Please familiarize yourself with Walter Thurmond. As Seattle's nickel corner, he's excluded from most "Legion of Boom" plaudits despite being skilled enough to start for most teams in the league. More importantly, he dresses like a Victorian gentleman. The only problem with the photo above? It was taken with a cell phone, when Thurmond CLEARLY would have preferred a daguerrotype taken with a camera obscura. 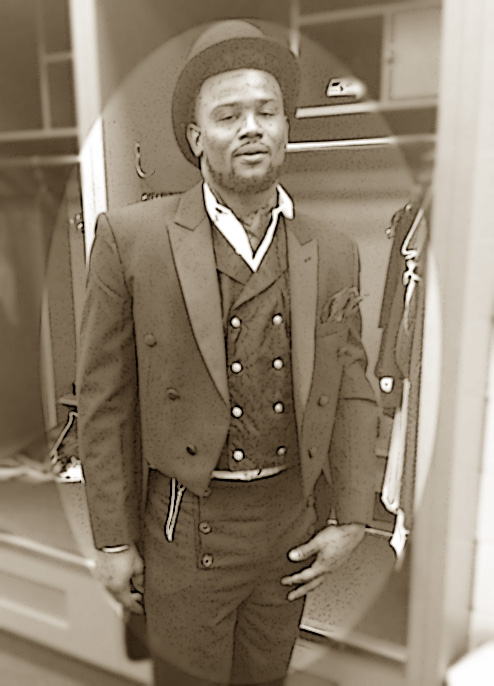 All is well on the distant shore of this vast new land. I have found work with a sporting club in the huey of Seattle, so named after a local chieftain of some repute. The work is taxing to my body but rewarding to my spirit, as my heart swells with pride and fraternal admiration for my team-mates, many of them famed and celebrated throughout the country. (It rewards my finances as well; my pockets are filled with long-tailed bills as often as not.)

Yesterday we met at the local fairgrounds to exchange fisticuffs with the Titans of Tennessee, led by a glocky Irishman of some supposed academic acclaim. Bollocks! Our punishers gave the mick and his mates Saint Peter's needle, a right dewskitch they won't soon forget.

Pardon my braggodocio, sweet Agnes. I do so love my work here, just as I miss your sweet touch and warm smile. I have enclosed a pictogram taken by a local newspaperman. Perhaps it will help you remember me until I can return to you again. 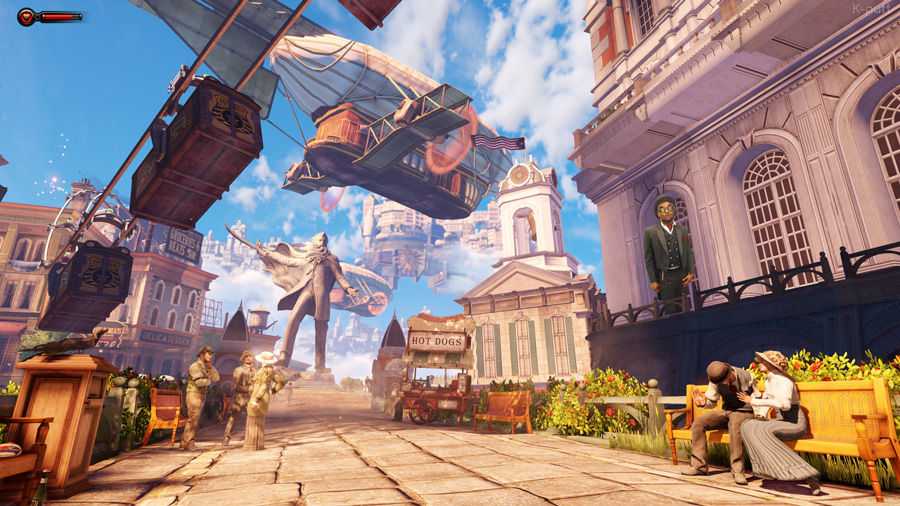 You may also have seen Thurmond in Bioshock: Infinite. I almost didn't recognize him without the goggles.

Despite some signs of life from the Jaguars in Denver -- a lively defense, terrific play from Justin Blackmon, an aggressive coach -- Jacksonville remains the focus of Clowneywatch (which may soon be rebranded as Bridgewaterwatch). But the Giants have at least entered the sweepstakes, and that's terrifying. The Giants have already had sixty-five game-changing pass rushers in their history; I refuse to accept a world where they draft Jadeveon Clowney.