And now the Knicks get a taste of their own medicine, courtesy of Carmelo Anthony

Melo says he wants to be a free agent. Have fun with that, New York. Plus: looking at the purest scorers in the modern NBA, reviewing Mark Cuban's court win and bowing before Andre Drummond.

Share All sharing options for: And now the Knicks get a taste of their own medicine, courtesy of Carmelo Anthony

It's really kind of lovely that three years after the Knicks and Carmelo Anthony held the NBA hostage through mutual desire that 'Melo will now inflict that punishment on the Knicks. Remember, the Knicks bottled all of their dreams ahead of the 2010 free agency period, only to come out with Amare Stoudemire and Raymond Felton. No LeBron, no Wade, not even a Bosh or a Joe Johnson: just Amare and Ray. (Amare's status back then was, however, pretty high.)

But 'Melo would become a free agent a year later, and he was not shy about wanting to go to New York. The Nets wedged themselves into the conversation, but reporters with sources heavily implied that the Knicks were the target.

The Nuggets didn't flinch and waited until the Knicks were offering a deal they liked. That look a long time: the so-called Melodrama stretched from August 2010 to February 22, 2011. And it pretty much kept the NBA trade market on ice all season. When done, it opened up a minor pre-deadline frenzy, as the Nets responded by trading for Deron Williams.

Since then, it's worked out pretty well for New York and 'Melo: the Knicks have been better each season and made the playoffs all three springs since Anthony's arrival. And Carmelo won the scoring title in 2012-13, finishing No. 3 in MVP voting.

"I want to be a free agent," Anthony tells me, as our cigars burn close to the nub. "I think everybody in the NBA dreams to be a free agent at least one time in their career. It's like you have an evaluation period, you know. It's like if I'm in the gym and I have all the coaches, all the owners, all the GMs come into the gym and just evaluate everything I do. So yes, I want that experience."

So, uh, have fun with that, New York.

This isn't going to be a repeat of the Melodrama, because the Knicks aren't trading Anthony before the deadline unless the season goes off the rails and he tells them he's leaving. It'll be more like Cleveland's 2009-10 season, in which the fan base had no realistic read on whether their superstar would flee or not. And man, that uncertainty is some kind of killer. (Take it from someone who had no realistic read last season on whether their team would flee.) It'll make every loss more upsetting, every win less joyful and the stretch between the end of the Knicks' season and resolution intolerable.

It's what most small-market teams have to deal with at some point. Now it's New York's turn. Cheers!

(That New York Observer profile, by the way, is quite excellent. Read the whole thing beyond the news hook).

GET (NOTHING BUT) BUCKETS 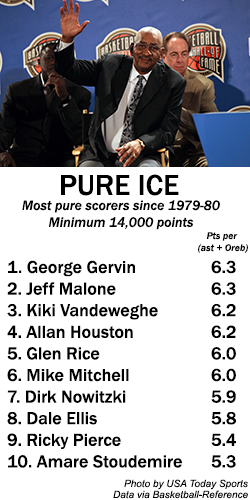 On Monday I wrote about why our common definition of the "pure scorer" is weird, and I put together a basic formula to determine that, using the traditional definition of the word "pure," Klay Thompson was the purest scorer in the NBA last season. This means he was the player most likely to score at a rate disproportionate to his other measurable offensive contributions (assists and offensive rebounds).

Zach Lowe keenly recognized that Allan Houston is the archetype of the pure scorer. So I decided to do a more historical look at the Scorer Purity Index. Among all players who have scored at least 14,000 points in the three-point era -- there's 100 of them -- the chart at right shows the top 10 most pure scorers.

Sure enough, Zach's hunch was spot on: Houston is No. 4 in the modern era in terms of scorer purity. He really didn't do much else but get buckets. But the purest scorer of the modern era is none other than George Gervin. From 1979-80 on, the Iceman had about 10 times as many points as assists and about 20 times as many points as offensive rebounds. He did one thing on the court: score. And then he scored some more.

Basketball-Reference has individual game stats going back to 1985-86. Since then, Houston actually tied for fourth in games with 25 or more points, zero assists and zero offensive rebounds. He had seven of them, as did Ray Allen, Dale Ellis and Jeff Malone. Beating those pure scorers: Glen Rice with 11, Reggie Miller with nine and ultra pure Michael Redd with eight. Worth noting: Kevin Durant and Rudy Gay have had six such games each to date. (Interestingly, SI's Chris Ballard noted that Allan Houston is one of three players to score 27 and not record another positive box score stat in a game. Miller and Redd are the other two. In Houston's version of the trick, he actually scored 37 points. He took 20 shots from the floor, played 38 minutes and recorded nothing but 37 points, four turnovers and five fouls. Amazing).

All hail the pure-scoring small forward.

Mark Cuban swished his tail after beating the Securities and Exchange Commission on Wednesday in a five-year case over alleged insider trading. The victory somehow became about government overreach and personal targeting of the Mavericks owner. Whatever. The crux of the case is that the SEC had testimony that indicates Cuban dumped stock in a minor search company after receiving a heads-up on a stock sale that would deflate the value of his holdings. That "heads-up" wasn't public, so Cuban's dumping of the stock would have been considered trading on inside information, which is illegal. Hence, the case. But the SEC couldn't prove that the heads-up actually occurred -- it may have been fabricated in some sort of scheme between the company's CEO and the folks who bought Cuban's shares, or it may have happened without any evidence of it happening -- so a jury decided in Cuban's favor years after another judge had tried to have the SEC's complaint dismissed.

Basically, a prosecutor thought he had caught Cuban's hand in the cookie jar. He didn't have a good enough case. The end.

Cuban's always been one to grouse about how the folks in charge run things when those things don't line up with his interests. When refs call a tight game against his players, he complains about the league's awful officiating. When opposing players give too much lip, he lambastes them from his courtside perch. It's who Mark Cuban is at his core: a super passionate, highly self-interested, smartest-man-in-the-room, aggressive guy. It's not fully good nor bad. It's both! He could very well have simply gotten away with something shady this time around. We don't know for sure. But it's possible.

This a common thread throughout the piece, that Drummond never really grokked how exceptional his physical profile and skills were. I think perhaps he'll realize it soon. Another amazing anecdote is that Drummond didn't want to take a scholarship from another player, so he entered UConn as a walk-on and took out loans to pay for his freshman year. How amazing is that?

• The Hook: Why the rush to sign Andrew Bogut?