Share All sharing options for: You can't hate the Los Angeles Dodgers

There is no single way for a baseball team to be, but there are a few ways that baseball teams generally more-or-less are. There are the grim, coppish grit-farmers -- think of the bilious Arizona Diamondbacks, so weirdly eager to Water The Tree Of Liberty with the blood of those who don't sufficiently respect the game, or Atlanta's proud Party Police, protecting and serving the edicts in a thick and unwritten rulebook.

There are the teams that work like workplaces -- everyone showing up and doing things and liking each other more than not, but generally projecting not much more in the way of transcendence or fun than you'll find in the average workplace break room. And then there are the Good Time Bros, just having some scruffy fun out there and making things easy for Fox Sports producers, who are at their happiest when crafting promos built around facial hair.

The St. Louis Cardinals don't fit perfectly into any of those categories, as indeed most teams don't. They're a Workplace team, if predictably a somewhat conservative one -- this is, after all, a baseball team with baseball players on it, not the staff of a scrappy alt-weekly or organic farming collective.

They behave about like a baseball team would, and their fans -- lazily lauded and lazily loathed as The Best Fans In Baseball -- are knowledgeable, supremely devoted and passionate and so, on balance, more or less as unbearable as any other fan base. The whole St. Louis Cardinals thing is a lot easier to dislike in the abstract than the team itself is in any concrete, as-they-actually-exist state.

That there is a portion of the baseball-watching world that insists upon seeing them as an elite squad of Niedermeyers seems less like a reflection of the team itself -- which is, again, like many other teams, but a good deal better at important things -- than an echo of various annoying things associated with the team. There's the glowering ghost of Tony La Russa, the team's legendary, departed, ulcerous and pyrotechnically smug hypermanager; an image of him is on the outfield wall at Busch Stadium, beaming aggrieved vibes back towards home plate. There's the whole silly Best Fans thing, which incubates a squicky faux-understated smugness in those fully in its thrall, but is mostly annoying because of how endlessly and fatuously it is repeated.

But the Cardinals are not complicated, really -- they're a fantastically good organization in most every way, and well-supported by an appreciative fan base. Depending on your perspective, there either is or isn't something interesting about the specifics of all that. There is, objectively, nothing all that weird about it. The Cardinals, as one of the game's worst cliches has it, play the game played as the game was meant to be played. We know how to handle this sort of good, not-strange team, which is with some combination of admiration and grudging mockery. We do not quite know, as the last months have shown, know how to handle a good, quite strange team like the Los Angeles Dodgers. 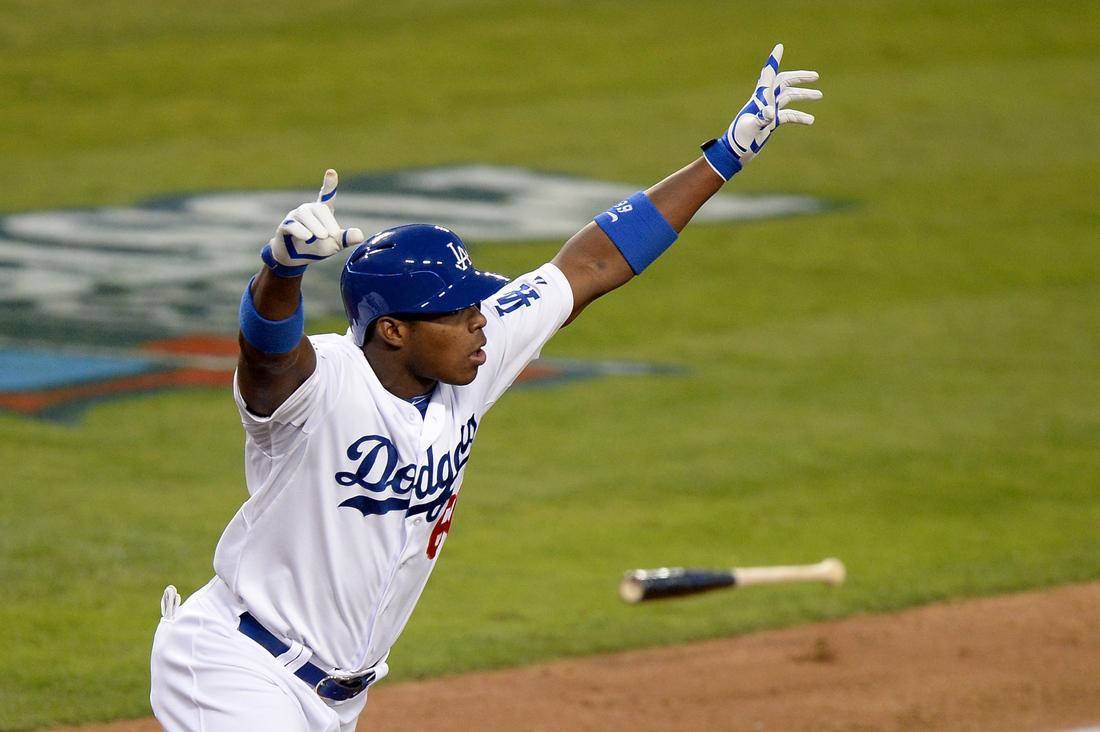 This goes beyond the dim These Two Teams Don't Like Each Other Much media narrative for the series -- all those grimly partisan rum-dummy-dum columns, self-defeatingly studded with hilariously anodyne Baseball Dude Quotes that thoroughly undercut the clash-of-civilizations narrativizing. It goes beyond, too, the thumbnail cultural attributes that make it simple to slot the coastal, diverse Dodgers into the (literal) Blue role opposite the Midwestern, more-white-than-not Red Team, and so allows sour patch masochists to re-stage our tragicomic political discourse on a baseball diamond. This is more, too, than the silly heavens-to-betsy-ing that dominated Our National Yasiel Puig Conversation during the summer.

But it is, maybe, nothing more than the Dodgers being the Dodgers. They are, too, not at all a new type of team -- in their happy rituals, brazen on-field enjoyment and generally swag-positive approach, they're a classic Party Bro team, and a fun one at that. They're also fully a Workplace team, cobbled together out of expensive parts acquired at a discount from teams that deemed them either defective or surplus to requirements. For much of the season, the Dodgers weren't even a functional Workplace team, and played in an enervated funk that suited a roster that could perhaps best have been described as Solid 2011 Fantasy Baseball Team. It's a testament to how interesting and truly strange this Dodgers team has been that both their 2013 iterations -- punk-jocky fun bunch and Grumpy Millionaires Baseballing Society -- make perfect sense.

This roster -- and this is part of the fun of the Dodgers, for those of us inclined to enjoy them -- is weird. There is Puig, the groovily overstated Cuban swagbeast at the heart of it. There is the amusingly humorless Zack Greinke and the amusingly brilliant Clayton Kershaw and the fascinating Hyun-Jin Ryu. There's Hanley Ramirez -- or was, before a broken rib brought him back to earth -- aloft in delirious, feral swing-at-and-destroy-every-pitch mode, and there's the unexpected re-emergence of the competent version of Juan Uribe. There's Adrian Gonzalez's late onset personality breakout and a passel of interchangeable utility types grit-spackling various holes and Carl Crawford's ongoing transformation into a puffier Brian McRae, which is more fun than it sounds. It's fun to watch and tough to figure how -- to paraphrase a common Cardinals fan refrain -- anyone who likes baseball can hate a team like this.

On Adrian Gonzalez and Yasiel Puig, and celebrating like Mickey Mouse 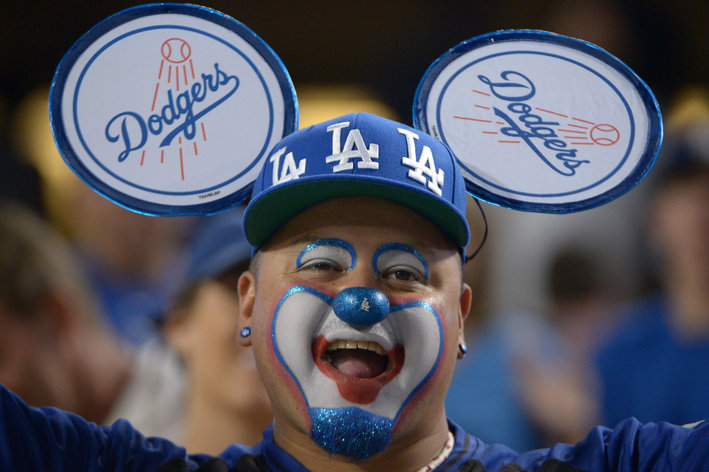 Adam Wainwright isn't just right to call out Adrian Gonzalez for celebrating -- he nailed it by linking Gonzalez's disgusting decision to mildly enjoy a baseball accomplishment to one of America's most beloved cartoon characters.

The Dodgers have projected joy as a winning team, but it's easy to imagine the same roster gone lumpy, curdled and unappealing in different circumstances. It's easy, too, to see how some of those currently co-surfing on this team's happy defiance could in time come to see them as brash, braying VIP Room jerkweeds having entirely too much fun. Because of the way this sort of thing works, a great many people who don't presently see things one way will come to view the team the other way, or both, and probably before too long.

As usual, this has more to do with us than it does with the Dodgers. Die-hards still watching their teams this late into October are fortunate, and we should be happy for them. The rest of us make varous unconscious micro-decisions -- based on various aesthetic and personal and political and geographical biases -- and so build our own bespoke collection of preferences and narratives, mostly because we're not ready to stop watching baseball just yet and also because this sort of transference is just what baseball fans do to add more feeling and fun to the game, and to life.

It's difficult for Cardinals fans and those in an October marriage-of-convenience to the Cardinals to imagine a good reason -- one not grounded in Coastal Elite smuggery or base haterdom -- why others might not like their (actually quite virtuous and admirable) team. It's difficult for Dodgers fans, those who came aboard in October and those who were walking up the hill from The Short Stop in July, to imagine how others could be so joy-averse as to resist this bright, wild team of theirs. The thing to remember, it seems, is that we're imagining all of it, all the way along the line, and also that each fan-imagination is every bit as good and distinctive as any other.

• Brisbee: The incalculable luck of the 2013 Red Sox