The NBA's middle class: where fringe stars now hang out

Payroll spending across the NBA is down. "Bad" contracts are drying up. Long underwhelming deals that anchor a team's payroll are disappearing. Meanwhile, the middle class is expanding, and we all benefit for it.

Share All sharing options for: The NBA's middle class: where fringe stars now hang out

On this broad analysis, then, NBA salaries are going down.

But despite this more conservative spending, the rookie scale, maximum salary and minimum salary amounts continue to increase year-by-year, as do the salary cap itself and the value of the mid-level and bi-annual exceptions. Players still worthy of the max still get it -- there just happened to not be too many candidates this season -- and countless others still get the minimum. The rookie scale is still mostly an automatic 120 percent affair, with only Dennis Schroeder and Andre Roberson receiving less than that this season, and roughly the same proportion of available exception money is being used now as it was there.

So where does this decreased spending evidenced? The removal of one extra year from the mid-level exception and all levels of Bird rights is a noticeable part of it. In 2008-09, there were big deals handed out, the kind of which we don't now see often. In the same summer that Chris Paul and Deron Williams got four year maximum contract extensions, Gilbert Arenas received $111,000,006 (and the $6 matters), Andris Biedrins received $54 million, Elton Brand received $79,795,496, Emeka Okafor received $72 million, Luol Deng received $71 million and so forth. 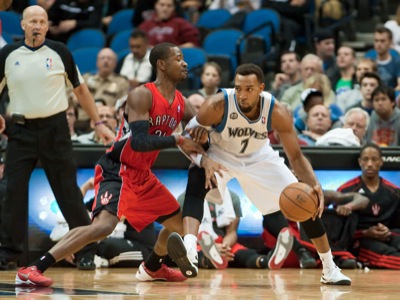 The latest from Mark Deeks.
10-10: Rookie contract casualties
10-3: The Pacers are locked in
9-25: How to float in the middle class
9-18: Emotion in contract negotiations

These deals are less common, due in no small part by the shortening of the maximum contract lengths under the 2011 CBA, but also due to more conservative spending in general. The $19 million Paul Millsap received this year is further impressive when compared to the $37.5 million Rip Hamilton received five years ago in a very similar situation.

Rather than the eight figure anchor deals, then, it is the contracts in the middle, those normally afforded to the quality role players, that have become the weapon of choice. Those eight-figure anchors have been squeezed down for the non-star players to often become these mid-value deals. The market is starting to reflect more of a three-tiered class system than before.

And this is probably a good thing. Of the 106 players from 2008, 31 of them had an average salary for the duration of between $3 million and $9.3 million, and only two of them (Ben Gordon and Robert Swift) were one year deals. Included in there were four years deals for the likes of Eduardo Najera ($12 million) and James Posey ($25,020,800), five-year deals for the likes of Ryan Gomes ($21,175,000) and Daniel Gibson ($20,054,000) and oversized three-years deals for the likes of Sasha Vujacic ($15 million) and Stephen Jackson ($27,769,500). Of those players, only Gomes has ever received another deal and is still in the league, an unguaranteed minimum salary one with OKC. You know your contract was too long when the player never gets another one afterwards.

In comparison, 36 such players have signed within those parameters in 2013. And in contrast to 2008, those names are often established quality role players who aren't quite stars and who rightly aren't being paid like it. At the top end, players like Monta Ellis, Jose Calderon, Brandon Jennings, Jarrett Jack, Jeff Teague and Carl Landry are all getting acceptable prices, perhaps $2 million annually less than they would have done five years ago. At the bottom end, established role players like Marreese Speights, Tony Allen and Chris Kaman are getting paid adequately for their useful role player production. And unlike in 2008, those deals like Kaman's are not too long. See also Greg Stiemsma, Tyler Hansbrough, Mike Dunleavy Jr, Dorell Wright and Randy Foye, none more than three years in length, some as short as one.

Forgetting for a minute the wild anomaly that is Keith Bogans (three years, $15,857,471), those 2013 contracts in roughly the mid-level range, be it the taxpayer or the non-taxpayer edition, are the ones you should be seeing in there. And they are for sufficiently few years to ever be burdensome.

The mid-level exception used to be for giving ridiculously excessive four or five year contracts to average or backup calibre players like Jason Kapono or DeSagana Diop. It shouldn't have been, but it was, and only if that player sustained his averageness for many seasons (e.g. Beno Udrih) did that work out. Nowadays, however, the MLE is used for much better quality players. It lands you Andrei Kirilenko and Marreese Speights for less than $4 million annually, not Mickael Pietrus for $5.3 million per for four years.

This is helped in no small part by the presence of the smaller taxpayer mid-level exception. Whilst designed to be smaller so as to prevent the already rich from getting too much richer by preventing how much they can overpay for someone, the by-product is it actually increases these team's roster flexibility. Teams need this mid-range contracts to facilitate deals. You can't just deal big contracts to make deals, and you can't just make do with little ones, even with the expanded trade parameters for teams over the cap.

As an example of this, look at how New York had to scrape the barrel to find enough pieces to pay Raymond Felton, and how they were only able to facilitate the later deal for Andrea Bargnani because of the sufficiently smaller deals of Marcus Camby and Steve Novak. They now have no other such sized deals except for Felton, and are thus somewhat all-in. These mid-range, shorter deals, combined with first round picks, are the vehicles that make trades happen.

No one can be too overpaid to be burdensome at $3-5 million a season. Not even Keith Bogans. These are the deals that are getting more prevalent and ever more important.

• Carmelo Anthony: "I want to be a free agent"

• The Hook: Knicks get a taste of their own medicine