Breaking down the big-time throws from the NFL's best quarterbacks

These guys make it look it easy, but playing quarterback in the NFL is the most difficult job in sports. Here's a closer look at how Tom Brady, Matthew Stafford and the league's top quarterbacks can steal a game.

Share All sharing options for: Breaking down the big-time throws from the NFL's best quarterbacks

Every year, passing records are broken as teams ditch the run and pass the ball more frequently and with more efficiency. Quarterbacks are the faces of franchises. They're considered the most important player on every team and tend to command the most money. All this makes sense, because quarterback is probably one of the most difficult positions to play in all of sports.

An NFL quarterback must to sift through the total chaos that involves 22 moving parts on every play, figure out where everyone's going in about two seconds (max), adjust their footing, maintain balance, avoid giant, angry men trying to rip their head off and throw the ball downfield with precise timing, ball location, velocity and touch.

With the sheer degree of difficulty of playing the quarterback position in mind, I wanted to break down some impressive throws I noticed from Week 6 of the NFL season. A few of these throws could probably be categorized in what Ron Jaworski and Greg Cosell might call 'big-time throws.' The ones that might not quite deserve that distinction were picked because they stem from impressive scheming, creative play-design, or just excellent execution. In any case, let's take a look at the tape, sit back, and appreciate how damn hard it would be to actually do this for a living.

This throw by Jay Cutler in the Bears' Thursday Night Football game with the Giants wasn't necessarily a "big-time" throw. However, it was a creative and successful play design, and Cutler put great touch on the football in getting it to Brandon Marshall in the end zone.

The key to Cutler's read, and throw, is that middle linebacker. Once Cutler has identified that the safety to the right is sticking outside, he must simply read the middle linebacker and put the ball where he cannot reach it. Once Alshon Jeffrey draws the attention of the MLB, Cutler pulls the trigger.

As you can see, the MIKE does have a good angle on the passing lane and even reads Cutler's eyes as to where he's going, but Cutler trusts his receiver, throws it up for him and put enough loft on it to make sure it's just out of the linebacker's range.

So how did the Bears scheme for this result?

They came out in a five-wide formation against the Giants two-high nickel zone coverage look. The Giants pick up Jeffrey and Marshall as they converge over the middle, but nickelback Will Hill passes Marshall off as he leaves Hill's zone. In this case, the middle linebacker is concerned with Alshon Jeffrey, who is running a middle-breaking route underneath Marshall, and Marshall sneaks in behind the coverage zone. 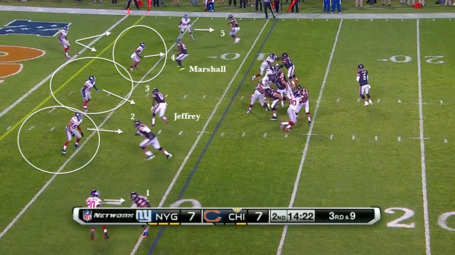 The safety on the play side breaks late on the ball, after Marshall cuts toward the post. Check out the middle linebacker's depth - he's just a step or two too shallow to break up the pass. 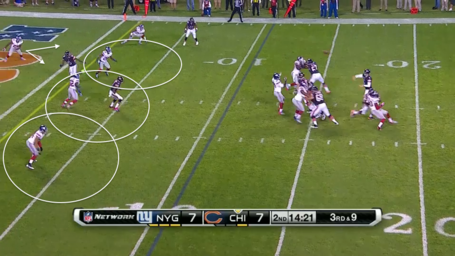 Aaron Rodgers. You may have heard of this guy. All he did last Sunday was throw a dime 60+ yards downfield, hitting Jordy Nelson in stride right on the hands with the lightness and touch of about what you'd expect if I lobbed you a balloon from 2-feet away. It went for a 64 yard touchdown.

I'm not trying to sound like an Aaron Rodgers fanboy, but holy crap, that was an impressive throw.

The scheme that made it work was impressive as well. Against Baltimore two-high safety look, Mike McCarthy and Aaron Rodgers drag their tight end across the field deep on play-action, which draws in the attention of the safety on the opposite side, James Ihedigbo. 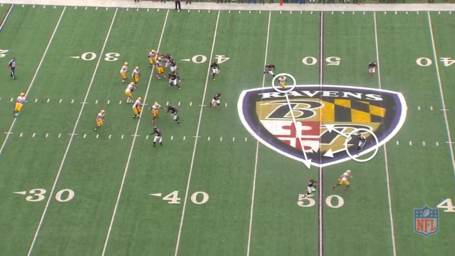 All Jordy Nelson has to do is beat his man, Ladarius Webb, off the line and then down the field, and once that play-side safety (Ihedigbo) bites down on the crossing tight end route, Rodgers lets it fly. 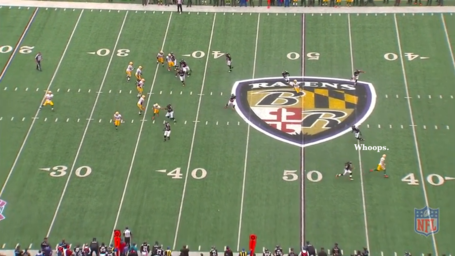 Most people probably don't consider Dalton among the league's elite passers, but he had a few extremely impressive throws last Sunday, and this one might have been the best.

Now, credit where credit is due here. A.J. Green is an absolute freak and goes up high to corral Dalton's pass. Still, I loved that Dalton trusted his big-time receiver and threw him a big-time pass.

As you can see below - this play is completely timing and accuracy based. Green is obviously the key player here, and he runs a slick post-corner route. Green comes out of his stem by turning his hips inside, getting corner Leodis McKelvin to turn his hips with him, then alters his course outside with a jagged cut. 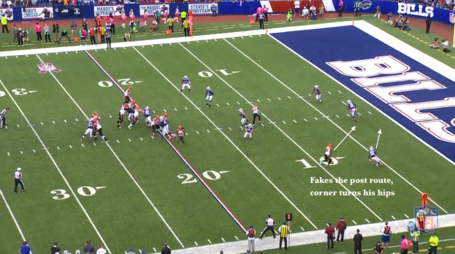 McKelvin actually recovers fairly quickly, but it's ashes regardless. As you can see below - timing is everything in the NFL, and Dalton pulls the trigger the instant that Green cuts outside. Dalton doesn't wait to see what the defender is planning on doing or if he'll be in position to make the play, he just throws it to a spot where only Green can get to it. 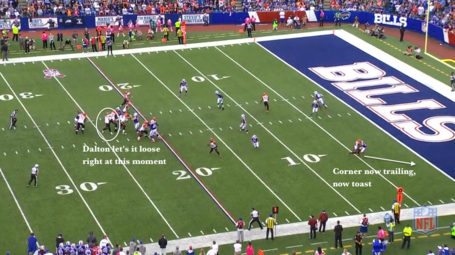 This is a similar throw by Matt Stafford and again, was based primarily on timing and accuracy. It never ceases to amaze me how quickly and decisively a quarterback can choose to pull the trigger. In this case, you see almost no hesitation from Stafford after he executes his play-action fake.

It's not like rookie TE Joseph Fauria was open either. After briefly looking the safety off of the seam route, Stafford hits Fauria as two defenders converge. Look at how tight to Fauria's hip linebacker Craig Robertson is when Stafford makes the throw. 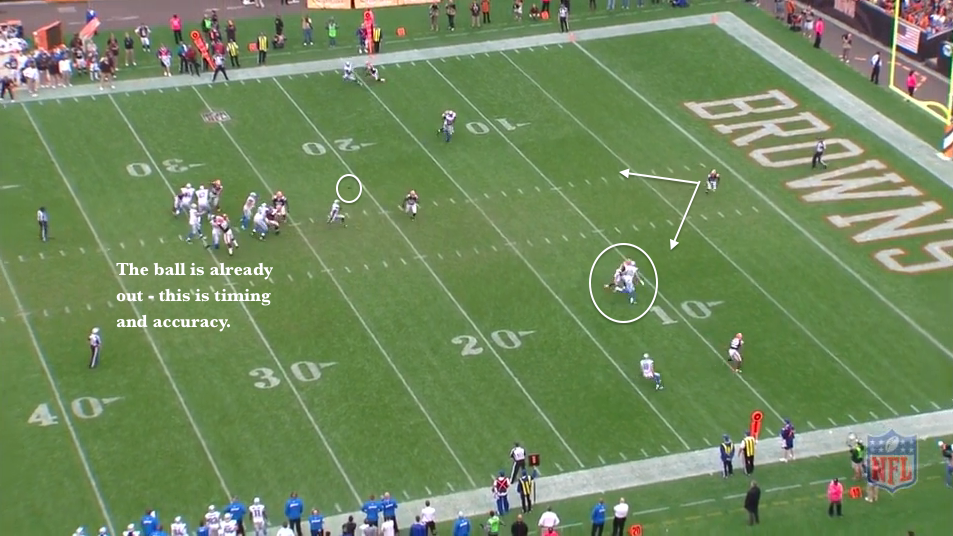 The ball location is key, though, and as Stafford puts it to Fauria's back shoulder, the rookie TE opens his hips and catches it while spinning into the endzone. A great throw by the Lions' signalcaller and a key play in the Lions victory.

I won't spend too much time on this play out of respect for Saints' fans and their legitimate complaint about the hold on the left-hand side there, but this was, without a doubt, a big time throw by Tom Brady regardless.

Brady makes his drop, looks at Austin Collie up the seam briefly to freeze the safety, then lets loose with a corner shot from the pocket to Kenbrell Thompkins. You couldn't ask for a better timed throw with more precise ball location than this.

The crazy thing about this play is that Saints' DB Jabari Greer played it well the entire time. He's backpedaling with Thompkins with his eyes in on Brady the whole time. He sees the pass released and is still in the passing lane with Thompkins, but Brady lays it up to a spot where only Thompkins can get it. See below how the two players are situated when the ball comes out. 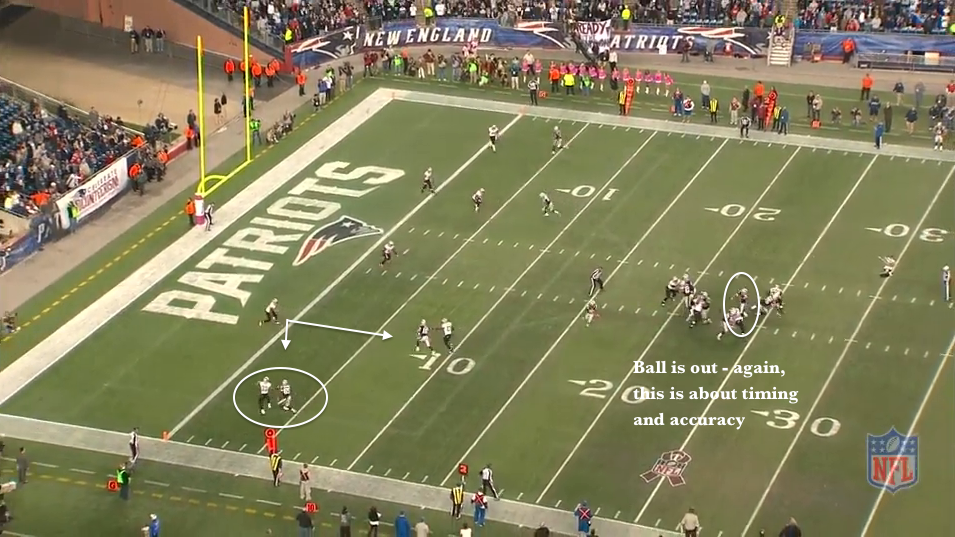 Greer looking in at Brady ... 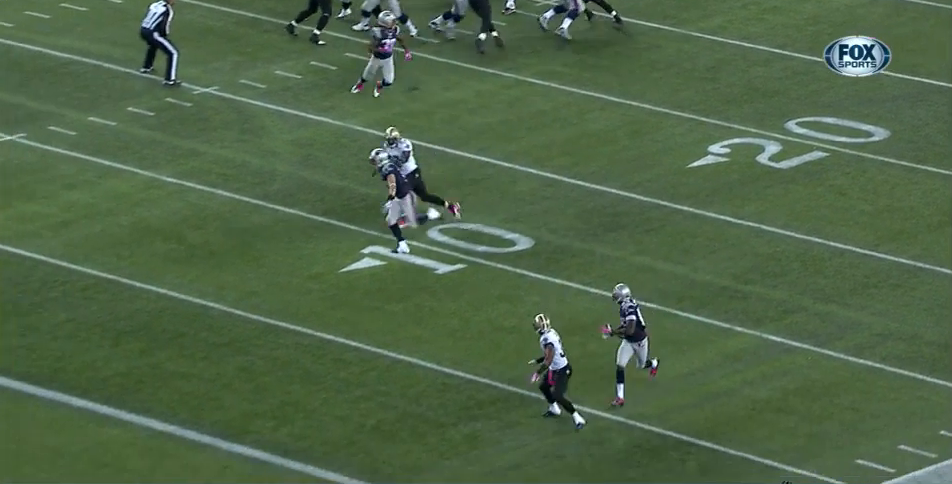 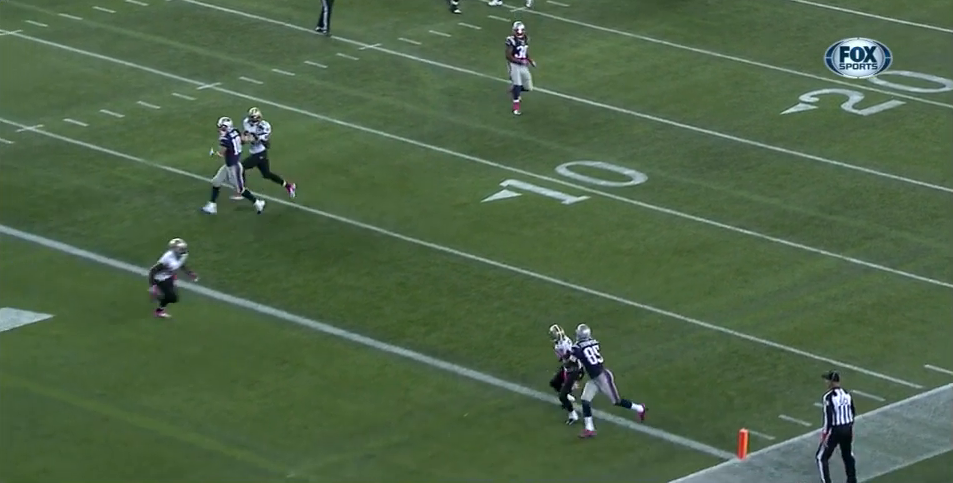 But the ball is placed just out of reach. Unbelievable throw, particularly given the situation. 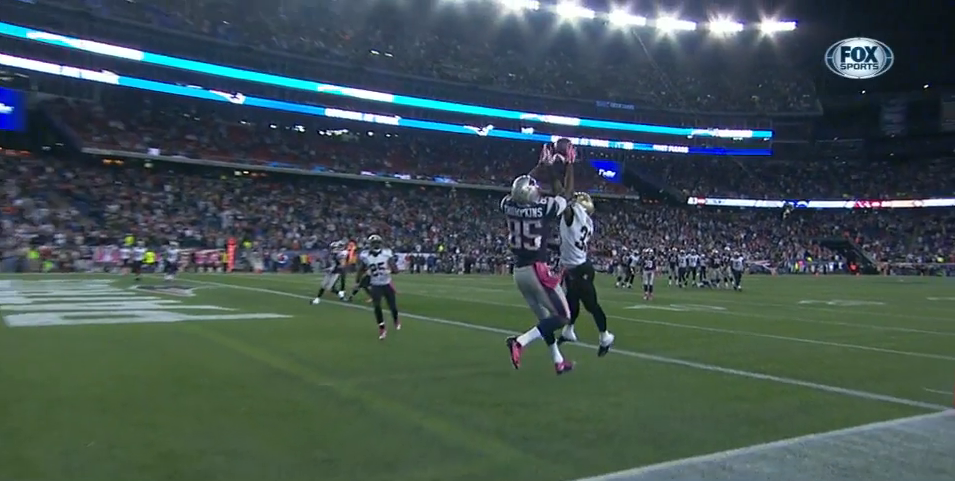 Brady's throw was impressive, but if there's a rival to it, it's this one by Philip Rivers on Monday Night Football against the Colts.

The key read for Rivers on this play is the safety, Delano Howell. The Chargers run a great little route combination with Ryan Mathews and Antonio Gates moving outside toward the sideline with Keenan Allen sneaking in behind them.

Howell bites on Gates' route - and it's easy to see why when you look at Rivers' helmet and shoulders after the play-action. However, once Rivers sees Howell step in that direction, he wastes exactly no time in throwing it to the back of the endzone for Allen, leading him just enough to slide under it.

Here's how it breaks down. As you can see below with a little more perspective, Allen appears to be covered up well on the sideline 'go-route' and Howell breaks for Gates' underneath route toward the sticks. 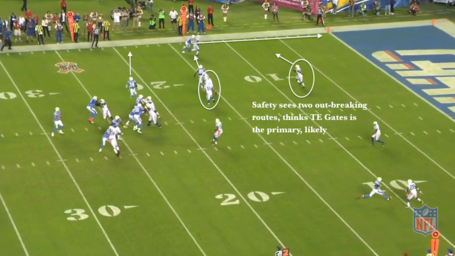 Howell, in his defense, almost immediately recognizes the ruse, and tries to break on the deeper route by Allen. However, what he doesn't realize is that Allen is rounding his route off into the middle of the field and not going straight up the sideline. 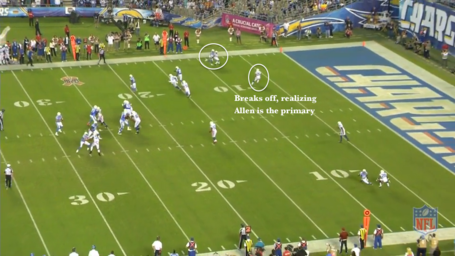 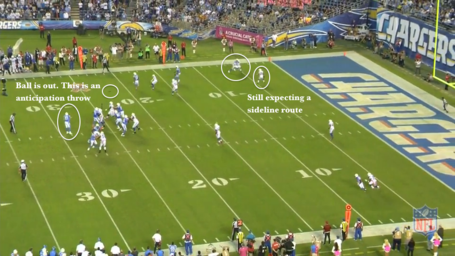 Howell is now turned around and the time it takes him to flip his hips and change direction is precisely what Rivers had planned for. He slips it in just past the outstretched arms of the safety he just duped. 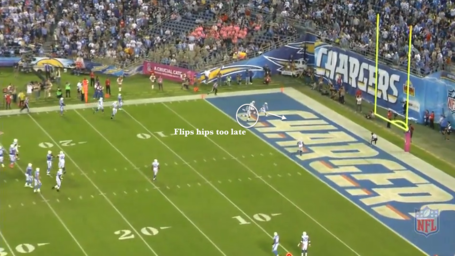 There is a reason Rivers had been among the league's elite at quarterback and looks to be back in that company again this year. 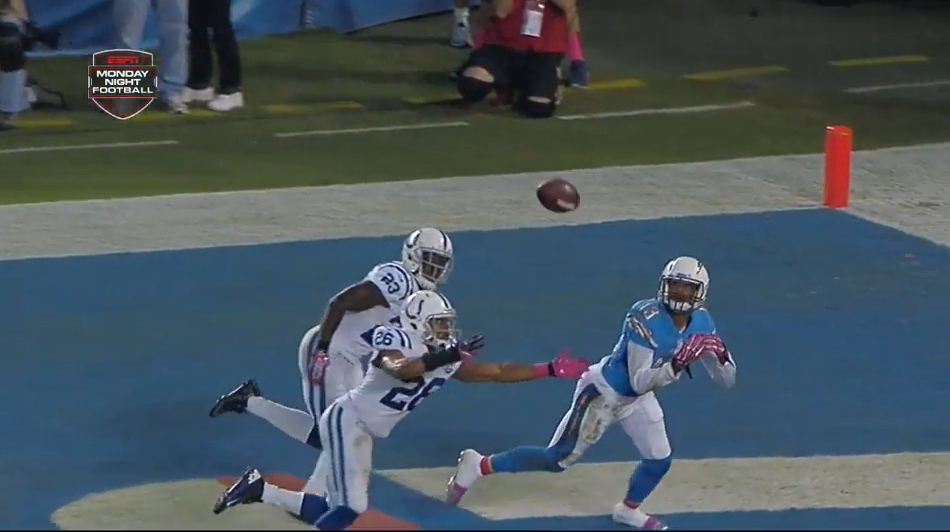 There you have it - a smattering of excellent throws and interesting schemes from Week 6. I get the feeling that people know that quarterback is a hard position to play, but in breaking down some of these throws, it really made me appreciate just how amazing difficult it really is.

Timing, accuracy, touch, velocity - all these things have to be nearly perfect only after a quarterback has made his read and decided to throw in a split second.

• Dan on Fire: Is Eli betting against the Giants?