Breaking Madden: In which the Eagles get drunk and give up 2,400 yards in a single game

The Giants' running game is one of the very worst in the NFL. Let's give them Adrian Peterson and Marshawn Lynch, trash the defensive ratings of their Week 5 opponents, and make Madden NFL 25 so sad and angry it forgets how to count.

Share All sharing options for: Breaking Madden: In which the Eagles get drunk and give up 2,400 yards in a single game

What are we doing? Who are we fooling?

Hell is hot, fire is proven

[...] Tired of running, choirs is humming

Tell us to visit, we lying 'bout coming

Minivans are a sensible option and reasonably fun to drive

At 0-4, the New York Giants are likely to finish with their first losing record since 2004. They rank third-to-last in the league in both points (61) and rushing yards (231). With regard to the latter, they're pacing to finish with fewer than 1,000 rushing yards this season; excluding the teams of the shortened 1982 season, no team has done that since the AFL and NFL merged in the 1960s.

The Giants' only real hope of improving in the rushing department is Andre Brown, who showed some flash last season but is sitting on injured reserve until November. Until then they have a fumble-prone, ineffective David Wilson, rookie Michael Cox, and a 31-year-old Brandon Jacobs, who is so old that he is as old as I am. This running game is awful, and might end up being historically awful.

I have decided that two years is far too long to endure without a Super Bowl title, and that New York sports teams are criminally neglected by the media, so I have decided to fix the Giants' rushing attack.

But this is not called "Be Kind To Others Madden." This is called "Breaking Madden." In the process of transforming the Giants' ground game into a juggernaut, I am electing to thoroughly destroy the defense of the Philadelphia Eagles, their Week 5 opponent.

We're going to do three things. Well, I am, and you're gonna sit there and watch if you hate the sport of football enough.

I. WE GIVE THE GIANTS THE BEST OFFENSIVE LINE IN THE HISTORY OF FOOTBALL.

I released all of the Giants' starting offensive linemen and replaced them with seven-foot-tall monsters. I set every available player rating category -- Strength, Run Blocking, Awareness, etc. -- at a perfect 99 out of 99. As usual, I found them on Twitter.

if you would like to appear in the next Breaking Madden, please tell me how you would deal with media scrutiny if you played in New York

First, I'd like to give a special shout-out to all y'all who are categorically unsuited for this role: 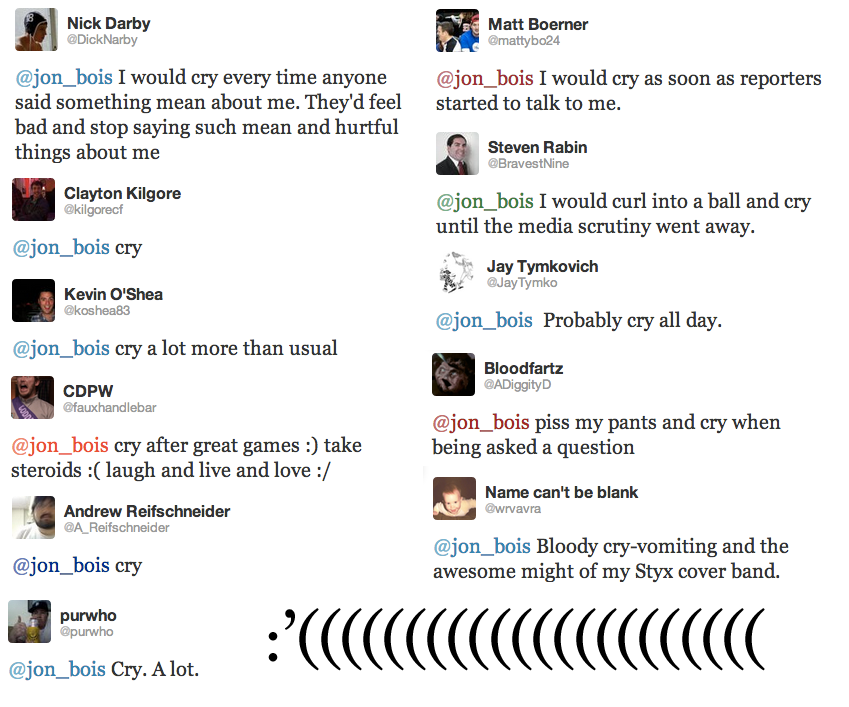 Y'all are Dustin Hoffman in Midnight Cowboy. Time to leave New York, get on a bus, and cry your way to a place where the weather suits your clothes.

That movie's so sad that I'm gonna start crying if I dwell on it any longer. Moving on. I decided to place these five folks on the Giants' offensive line on the merits of their frighteningly effective ideas for dealing with the New York media. 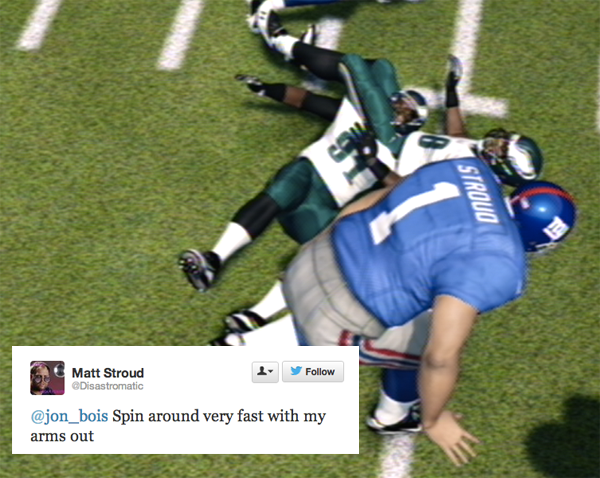 Above, you can sort of see him doing this, and you can see what results: the Eagles performing the most elaborate timeout signal I've ever seen. It's like they're doing it so large that God might see it and cull them from this nightmare. No such luck, knuckleheads. 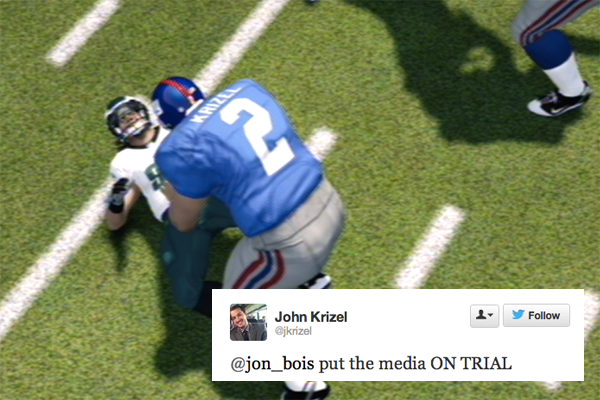 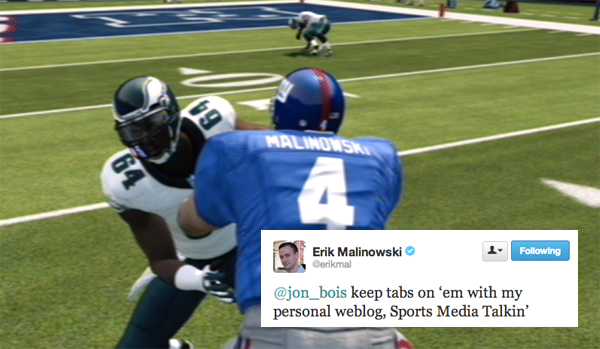 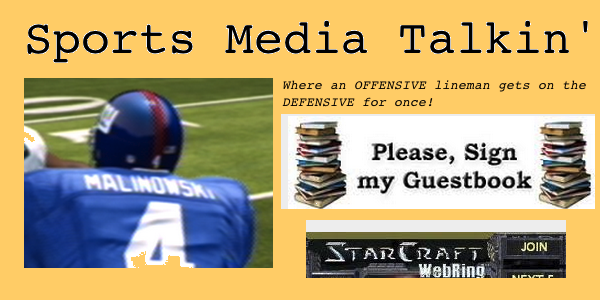 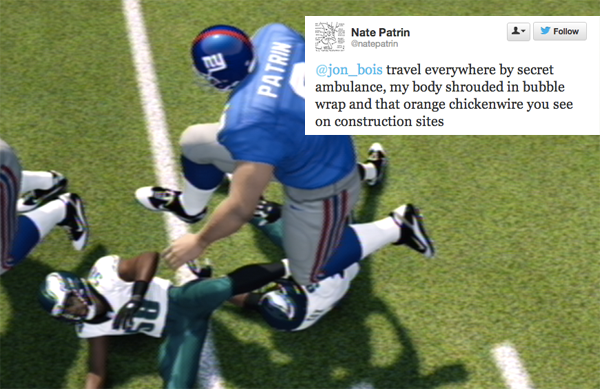 This can be arranged. We will repaint an ambulance such that it reads "AMBULANCE" in non-reverse, so that people will not be able to read it through their mirrors, and the siren will be replaced by a speaker that shouts "SECRET AMBULANCE" on loop. 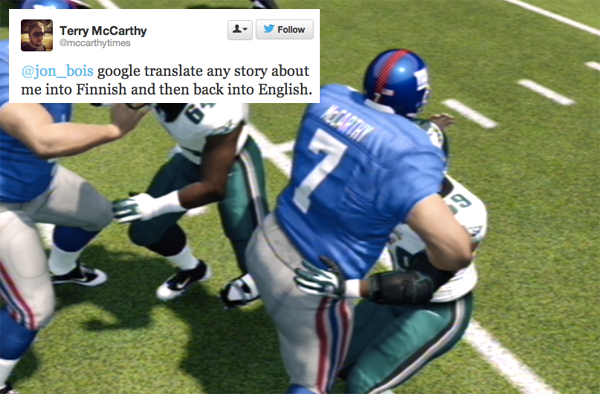 Terry McCarthy stinks. He is bad at football.

Terry McCarthy stinks. He is a bad football.

II. WE GIVE THE GIANTS THE BEST RUNNING BACK COMMITTEE IN THE HISTORY OF FOOTBALL.

David Wilson and friends are gone. This is the Giants' new running back depth chart:

I wanted to give the Giants a variety of options: a power back (Lynch), a speed back (Charles), and a man-God (Peterson). I am also pitting the Eagles' own stud back against them for the sake of abject cruelty.

Whenever I play Madden in the sense the game was actually intended, I am always the Chiefs. This has been true since Madden '93. When playing like normal, whether against the computer or a friend, I have never -- not even once -- played as another team, because I consider it unclean. So Eagles fans, I want y'all to know that dropping Charles into a Giants uniform was a terrible experience, and that in some regard, I understand what I am about to do to your team on a personal level.

III. WE GET THE EAGLES DRUNK.

I edited the player ratings of every last member of the Eagles' defense. I left most of their ratings untouched, but altered a handful of ratings in order to simulate an intoxicated player as best I could. They are all zeros in the following categories:

After I made these changes, the Eagles' overall rating -- which is 76 by default -- sank all the way to 50.

I decided to give Eli Manning a rest by running nothing but runs. I called a healthy amount of Power O, along with a good number of outside runs. For this exercise, I elected to control the running backs myself, because a) I felt that I could do a better job than the AI, and b) it sounded like tons of fun.

If you're familiar with this Breaking Madden series, you know that the game itself usually tries to thwart my efforts through one means or another. This time, the game injured Adrian Peterson on the second play from scrimmage. It also, by the look of it, gave the football legs and tried to make it run away from my horrible experiment.

UNACCEPTABLE. I quit the game, maxed out my runners' injury-resistance ratings, and fired it back up. Xbox, you and I have been on this journey for over a month now. You should know better than to test my stubborn sadism, friend.

My efforts to make the Eagles appear drunk were more successful than I could have dreamed. Here is Patrick Chung attempting to tackle Marshawn Lynch.

It really was remarkable. It was as though no surface of the Eagles' bodies had more utility than any other. Their hands were every bit as useful as, like, the backs of their knees. They were just hinged, organic assemblies of surface area that might make contact with the ball carrier if they were shoved in the right direction.

Drunk folk often don't know their limits. There really should be keys for "attempting to take on a team of 7-footers all by one's self," because they really should have been taken away.

I am a GIF purist, and as such, I would never want any of them to be accompanied with any sound at all. Except this one. I want bowling pins.

It's not just that the Eagles' defensive line collapses, it's that the Giants' O-line is completely free to sprint directly upfield. Check out Nate Patrin (No. 6) at the end of that GIF. Peterson is 10 yards upfield at this point, but he still takes time out of his day to make a beeline in the opposite direction and flatten No. 57.

I ran the hurry-up a whole lot, because I really wanted to wring every last second out of the clock and score as many points as I possibly could. Since I had a quartet of elite running backs with max injury ratings, I suffered absolutely no consequences for doing so. I did audible a few runs from the line, though, and the Eagles would try to keep up by making their own adjustments.

"hey guys i think they might run the ball for the 68th straight time, be surPOWWWWWWW." I'll stop right now and tell y'all: I have never seen a more dominant performance from a football offense, real or fictional.

When the Eagles were credited with a tackle, it was usually because they completely lucked into it. This right here might actually be my favorite moment. Lynch trips over the feet of one of his own guys. Watch as Philip Hunt just happens to fall into his path.

Stagger to your whiskey-logged feet, No. 56, and celebrate. You have been credited with a tackle. It is literally the only tackle you will make the entire game.

In 1916, Georgia Tech beat Cumberland College by a score of 222 to 0. There's no footage of that event, of course, and I always wondered what it must have looked like. After this experiment, I sort of get the picture.

The actual score: Giants 231, Eagles 64. I realize that the two scores displayed above contradict one another. I'd point to this as evidence that the game lost its sanity, but this has been going on for years. I've played every title since Madden NFL 09, and every single one will occasionally fail to add up the score properly. On a couple occasions, it even declared the wrong team the winner. This is an embarrassing oversight that will hopefully be corrected once Electronic Arts generates a billion trillion dollars of revenue, rather than a mere million trillion.

Peterson actually rushed for over 1,100 yards, but once again, the game stopped counting at 1,023. I'm guessing that this is because only 1,024 values can be represented by 10 binary switches in a computer system, and the game's developers (understandably) never would have guessed that another set of switches would be necessary.

In total, Madden counted a total of 2,458 rushing yards. If these guys would have done something more useful with their efforts, they could have run this far in any direction. 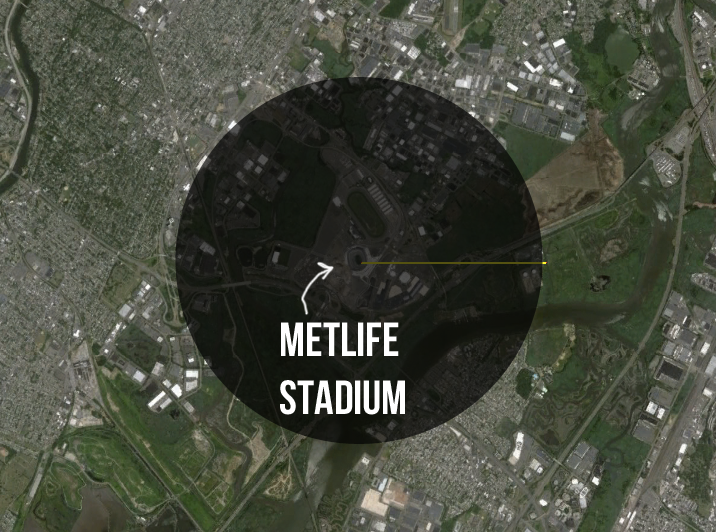 They could have patronized 11 hotels, 23 restaurants (including a Chili's!), six bars, several print shops, or a PetSmart. Thankfully for us, Madden is not a GTA-style sandbox, and they stayed at home to run over the stuporous Eagles, over and over and over again.

It was the most macabre of football spectacles, and I feel so bad about it that I want to run a pro-Eagles episode of Breaking Madden before the season's up. I'm sorry, everybody. Tom Waits, take us home:

To read more miserable adventures in video game football, check out our other episodes of Breaking Madden.