Serge Ibaka is the key to the Thunder's offensive survival

With Russell Westbrook out through at least November, the Thunder's offensive success will be determined largely by Ibaka. Plus, Arron Afflalo is the anti-Rudy Gay, John Salmons is down on himself and more.

Share All sharing options for: Serge Ibaka is the key to the Thunder's offensive survival

Russell Westbrook could miss the Thunder's first 15-20 games if his recovery from a second surgery on his knee goes as planned. While that obviously puts pressure on Kevin Durant to score more and Reggie Jackson to fill in the creation gap, no Thunderian* stands to benefit or suffer as much as Serge Ibaka.

How could Ibaka benefit? There's a huge scoring hole to fill, and I'm not sure Durant can soak it all up. KD already uses about 20 shooting possessions per 36 minutes. (Shooting possessions incorporate free throws, but not turnovers or assists leading to baskets by other players.) In the playoffs, for which Westbrook was unavailable for nine of the 11 games, Durant used 22 per game. That might be his upper limit over an extended stretch, especially when you consider how many of KD's shots come from Westbrook set-ups. Jackson used just under 13 shooting possessions per 36 in the playoffs and the same number in the regular season.

This is a key point: when it comes to possession use, players are essentially who they are. That's why per-minute scoring numbers tend to translate well when a bench player gets a bigger role. Scoring is a function of shot frequency and shooting efficiency, and the frequency stays stable in most role changes because it's driven more by a player's skills, attitude and conscience (of lack thereof) than circumstance. Some funky things happen when you mash a bunch of high-usage or low-usage players together (hello Heat and Magic, respectively), but in most cases, the guys who are accustomed to shooting frequently as a reserve will shoot frequently as a starter. Jackson doesn't shoot too frequently as a reserve, and it's unlikely he'll boost that much as a starter. The playoffs suggest that will remain the case during this Westbrook absence.

Similarly, Ibaka is a low-usage player. Even as his star improves, he's pretty allergic to taking shots that haven't been explicitly set up for him. This is an unabashed good thing most of the time, because he plays with the game's best scorer in Durant and its top creator in Westbrook. No one benefits more from Westbrook's aggression than Ibaka. And the fact that Ibaka has become a really good mid-range shooter helps Westbrook's assist numbers, of course. Last season, Ibaka hit 48 percent of his shots from 10-23 feet, which is basically Nowitzkian. Of Ibaka's 194 makes in that range, 87 percent of them were assisted. 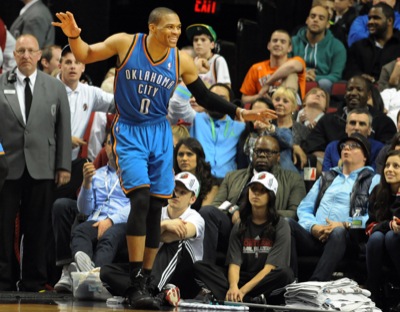 Andrew Garrison explains why the Thunder will miss Westbrook badly.

But here's the thing with Ibaka: he has a whole lot of efficiency to lose before he's deemed ineffective. Serge's True Shooting percentage last season was .612, which means he's good for 1.24 points per shooting possession. League average is about 1.06. Over the course of a game and a season, that's a big difference. But Westbrook was not nearly so efficient -- he was about league average in that category. So any extra shots that Ibaka soaks up in his absence don't need to be Ibaka Efficient, they just need to be Westbrook Efficient. And in fact, given that Oklahoma City finished No. 1 in offense last season and could probably survive a slip down the top-10 in that category because the team's defense is also spectacular and because Westbrook will return early enough in the season, Ibaka just needs to be not totally disastrous in those extra possessions.

The problem, of course, is that it's quite possible Ibaka will be disastrous in those extra possessions and his own normal possessions, as was the case once Westbrook went down in the playoffs last season. Ibaka shot 57 percent from the floor during the regular season and 43 percent from the floor in the playoffs. He went from one of the league's most efficient players in the regular season to a player less efficient than Brandon Jennings, Monta Ellis and Rudy Gay in the playoffs. Without Westbrook, he was kind of a disaster on offense.

The absence of Westbrook and the natural shot frequency inclinations of Durant and Jackson leave an opportunity for some Thunderian to add a pretty fat number to his points per game average. On the surface, hyper-efficient, lower-usage-than-you'd-expect Ibaka would be a prime candidate. But if Ibaka can't function offensively without Westbrook, there's a massive problem with not only that opportunity, but OKC's entire attack for the first month plus of the season. It'll be interesting to see how Scott Brooks and the OKC staff attacks this.

* We've really got to figure this out. Thunderer, Thunderist and Thunder Wonder are the other options.

On Monday we explored Rudy Gay's position on advanced metrics, and more specifically the advanced metrics that haunt him: shooting efficiency numbers. Gay lamented that efficiency stats reward three-pointers and free throws at the expense of the mid-range. (This is because the game of basketball, which features a natural possession limit and the 1-2-3 scoring system, rewards three-pointers and free throws.) Gay also argued that so long as he had the respect of opponents, he was cool with his style.

Arron Afflalo of the Orlando Magic is taking a different tact. From our friend Evan Dunlap at Orlando Pinstriped Post:

Whereas the Magic's younger players might use the offseason to add new dimensions to their games, Afflalo, a six-year veteran, had an entirely different focus: efficiency. He said there's "no question" that he'll try to be a more efficient player in his second Orlando season.

"Me getting better this year doesn't necessarily have to mean I'm adding new things to my game or trying to expand my role," Afflalo said, "but just being more and more effective with the things I can do well.

"So that means knocking down the three at a higher level, [and] shooting a good percentage from the line but actually getting there a little bit more. Last year, I had my first experiences with having a lot of attention from defenses on the offensive end. So now it's about picking my spots, being effective, [and] not wasting too much energy."

Be still my beating heart.

I don't begrudge Gay his desire to play the same way he's been playing since, well, college. But he'd do well to follow Afflalo's lead and adjust his game to become more valuable to his team. When we talk about what matters in winning and sacrifice, it isn't always about taking fewer shots or subjugating your status as a star for the good of the club. Sometimes, it's just about changing your game in ways that may not feel comfortable.

Gay is comfortable attacking 1-on-1 from the elbow. It's what he's always done. It's sort of a natural state of things for traditional small forwards who aren't passers. But it'd be better for Gay's numbers and the team's point total if some of those mid-range jumpers, runners and turnarounds were instead free throws or spot-up threes. Afflalo's cognizant of that and willing to adjust his game to achieve it. Gay, apparently, is not. (At least the way Jeff Caplan's story on Gay made it seem. It presented a pose that the player was not willing to change. It may very well have been exaggerated by all involved.)

That said, it'll be interesting to see whether Afflalo can achieve his goal given the state of Orlando's point guard position. Rookie Victor Oladipo, who has been considered a two guard, will run the point along with Jameer Nelson. If he needs lots of help, Afflalo may be recruited into supplemental slash/set-up status, which could thwart his intent to spot up for easy threes and live at the rim, where the bulk of free throws are created.

HOW YOU KNOW YOU HAD A BAD SEASON

You are surprised you didn't get waived under the amnesty clause.

The gentlemen of The Basketball Jones will announce on Wednesday what's going on with the show. J.E. Skeets and Tas Melas are basketblogosphere old-timers, and Yurt Kerby has been around a minute, as well. They are among the most hilarious, dedicated basketball personalities the web has ever seen, and I for one am excited to see where they land (even if it's a competitor). Follow Trey (@treykerby) for the news.

UPDATE: TBJ, nay "The Starters," is getting its own NBATV show. Kudos to them.

I have no idea what Monta Ball is, but Lord can I not wait to see (Rick Carlisle's reaction to) it. Speaking of devilish ex-Bucks ...

Larry Sanders when asked for response to Brandon Jennings' comments on playing with better bigs in DET: "He has to pass it to them first"

This is why LARRY SANDERS! is an internet sensation. This, and well ... this.