What's wrong with Notre Dame, and where's the offense go from here?

A month into the season, Notre Dame is still trying to figure out its offensive identity. The running game showed promise against Oklahoma, but the passing game was disastrous mix of well-covered receivers and empty backfields. What now?

Share All sharing options for: What's wrong with Notre Dame, and where's the offense go from here?

This was supposed to be a piece about the Oklahoma defense, what it did on Saturday in dismantling Notre Dame's passing game, and how that might apply to this weekend's TCU game. But in re-watching the Oklahoma-Notre Dame game and following along with the charting data, today's Morning Tailgate took on a different focus: What the hell is Notre Dame trying to do offensively?

It's easy to over-generalize when talking about the 2012 Notre Dame football team. Saying the Irish relied on a dominant three-man line and Manti Te'o to compensate for a young secondary and only occasionally proficient offense to win a lot of close games certainly gets you a good portion of the way toward understanding them. But for most of the season, Notre Dame was legitimately good on offense.

Quarterback Everett Golson, then a redshirt freshman, struggled at times early on, and Brian Kelly brought in Tommy Rees to close a couple of close games in September. But after the first four games, the Irish were between solid and excellent the rest of the way. They were ninth in Off. F/+ (higher than the defense, which ranked 13th in Def. F/+) and ranked better than 15th in most advanced offensive categories. This was a well-rounded unit, one that figured out ways to both protect Golson (lots of runs on passing downs, for instance) and maximize his skill set.

Golson carried the ball only about 6.1 times per game in 2012, but head coach Brian Kelly and offensive coordinator Chuck Martin figured out ways to take advantage of his wonderful mobility while keeping him behind the line of scrimmage. Much of the time, they did this by utilizing an empty backfield.

The no-back formation is one of college football's best curveballs, a formation designed for quick reads and small samples. And almost no offense in the country utilized the empty backfield better, and more frequently, than Notre Dame. With Golson's ability to elude tacklers and throw on the run, this formation became a lovely weapon, especially on passing downs.

Notre Dame tends to use the empty backfield a little different than most teams, however. Quick reads are typically the name of the game, but the Irish almost aim for pro-style principles within the most spready of spread formations. Two-thirds of Golson's passes out of the no-back formation traveled at least nine yards downfield, and only about one-sixth were thrown at or behind the line of scrimmage. Golson would frequently either roll out (via design) or scramble (via pressure) and eventually find an open man. These long throws out of the no-back were strangely successful: 60 percent completion rate (in charted games), 18.7 yards per completion.

The draw of the no-back is pretty obvious: If you identify a mismatch, you can quickly and cleanly exploit it by stretching the defense from sideline to sideline, minimizing the opportunities for double-teams and picking apart a mismatched defender (as long as you have the time to throw the ball). The drawbacks, however, are just as clear: There is little opportunity for deception, so you become predictable if you use it too much. Plus, your quarterback is typically a bit of a sitting duck with minimal protection against a defense that has no reason to fear a handoff to a running back that isn't there. But Golson's mobility and on-the-run accuracy minimized these typical liabilities. The empty backfield became a weapon with minimal downside, and Notre Dame used it more frequently (again, in charted games) than almost any offense in the country, almost 20 percent of the time (33 percent on passing downs).

Unfortunately for Notre Dame, Golson is suspended this fall due to academics. Instead of continuing to sculpt Golson in 2013, the Irish were forced to turn back to Rees. A starter for most of the 2011 season, Rees certainly has a little bit of success on his record. He completed 65 percent of his passes in 2011 and indeed steered Notre Dame out of danger against both Purdue and Michigan last fall. He filled in capably for Golson at times through the rest of the season.

He is not chopped liver, basically. But he's also not Golson. And a month into the season, with two losses under the belt and a lot of challenging games still to play (including this Saturday's neutral-site battle versus Arizona State), Notre Dame is still trying to figure out its offensive identity.

The offense that took the field Saturday against Oklahoma was both unsure and predictable. Taking on an Oklahoma defense with an iffy (but improving) pass rush and a deep, aggressive secondary, Kelly and the coaching staff seemed to trust that Rees would have enough time to identify mismatches and throw downfield to open receivers on passing situations. At least, that seemed like a safer bet than a run game that has had its own issues in 2013 after the departure of two leading running backs (Theo Riddick and Cierre Wood) and two experienced interior linemen (Braxston Cave and Mike Golic, Jr.).

Whatever you think about the gameplan in theory, it was clearly off in practice. Rees' first pass of the game was directed at a well-covered DaVaris Daniels and easily broken up by Zack Sanchez. His second was disrupted by a five-man pass rush and good coverage; on third-and-7, linebacker Eric Striker blitzed untouched from Rees' blindside, and with his only option (T.J. Jones dragging underneath) only semi-open and on the wrong side of the first-down marker, Rees held the ball too long, got hit as he was throwing, and got picked off.

(His third pass was also picked off, though this was a pure accuracy issue. The design of the play was solid.) 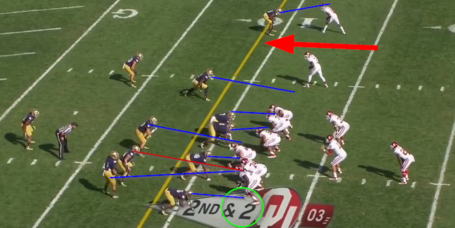 "The Sooners, taking a page from the Irish playbook last week, come out with an unbalanced line. Notre Dame's defense is not aligned correctly before the snap. From the bottom of the screen, Prince Shembo and Bennett Jackson are aligned correctly, but the rest of the defense is one gap too far to the weak side of the formation, starting with #44 Carlo Calabrese (red line). What this results in is the gap between the receivers not having a defender, and Blake Bell checks into a wide run to take advantage of the misalignment..."

With Notre Dame down 14-0 just minutes into the game, the Irish never really committed to the run, which was a shame because it was working pretty well. Oklahoma spends a lot of time in a 3-3-5 look this season, which both exacerbates the Sooners' advantages in the secondary and leaves them vulnerable to offensive linemen who can get to the second level of the defense and clear out running room. Speedy George Atkinson III and Tarean Folston combined for 191 yards on just 16 carries; Atkinson had an 80-yard touchdown run, and Folston ripped off a 36-yarder, but they still averaged 5.4 yards on their other 14 carries.

(Limited attempts at play-action passing were at least sporadically successful, as well: Rees was 2-for-3 for 41 yards but was picked off once and sacked once.)

Instead, Brian Kelly put the attempted comeback in Rees' hands for most of the way. And again, Rees has some strengths. But the Irish went to an empty backfield 60 percent of the time on passing downs with almost no payoff whatsoever. Rees is the polar opposite of "run threat," so all 15 snaps from an empty backfield were passes. Oklahoma sent five pass rushers at Rees 10 of 15 times and had reasonable success: Rees was 4-for-10 for 64 yards and was picked twice, once for a touchdown. A third incompletion was broken up by a defensive back, another was tipped at the line, and another was overthrown by a pressured Rees. Unable to scramble effectively to buy time, Rees found his options limited and his accuracy wanting.

And on top of that, the five times where Notre Dame went to a no-back formation and Oklahoma didn't blitz, Rees went 0-for-5, throwing passes well downfield (average length: 15 yards) with tiny to nonexistent windows for success.

The point of the empty backfield for most teams is quick, easy reads with quick, easy throws. Notre Dame takes a completely different approach and got away with it with the mobile Golson last season. But this attack in no way plays to whatever strengths Rees may have and puts a ton of pressure on him to make throws he can't make. In shorter catch-and-run situations on Saturday, Notre Dame found a little bit of success. On passes thrown six or fewer yards downfield, Rees was 5-for-8 for 41 yards. He was 3-for-3 for 33 yards in such passes to T.J. Jones. But he was just 2-for-5 on passes thrown 7-10 yards downfield, and he was just 2-for-9 on passes 11 yards or longer. His receivers got no separation downfield from Oklahoma defenders (in all, nine of 16 incomplete passes were either intercepted or broken up), and when they did, Rees struggled to get the ball there.

It's hard to say what this offense will or should look like moving forward. Kelly and Martin have tinkered quite a bit thus far -- the empty backfield was far more frequent on Saturday than it had been to date -- and don't seem to know what they trust Rees to do. They frequently brought backup Andrew Hendrix in to run the Irish's variation of the Wildcat, but Hendrix has not yet proven himself a credible passing threat (for the season: 1-for-6, nine yards). And without mobility at quarterback, Notre Dame's generally aggressive, downfield approach to passing doesn't make a lot of headway without an elite receiving corps. The checkdown options are minimal, it seems. 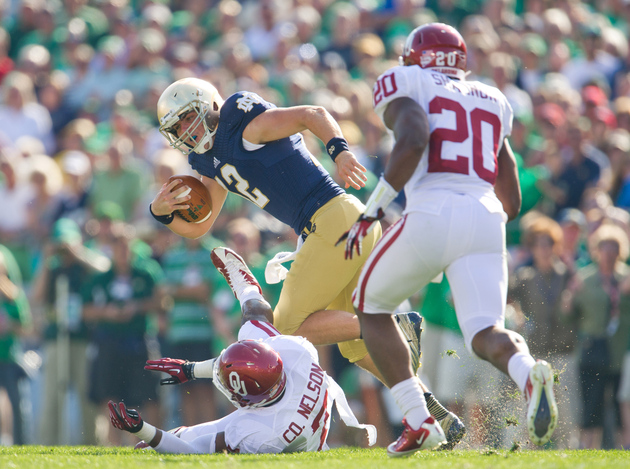 Ohio State-Northwestern
Biggest game in Wildcats history?
Can Ohio State stop both QBs?
Washington-Stanford
Beware the Cardinal D
What we learned about Stanford
Arizona State-Notre Dame
What's wrong with the Irish?
ASU podcast with star RB
TCU-Oklahoma
A defense the Frogs can score on?
Sooners O has a tough test

Unless the run game becomes a more trustworthy option (and again, it looked good at times on Saturday), Notre Dame's offensive success is based solely on whether or not Irish receivers can get open downfield. They did reasonably well against Temple, Michigan, and Purdue (Rees in those games: 65-for-96, 969 yards, seven touchdowns, two interceptions), and they very much did not against Michigan State and Oklahoma (23-for-58, 246 yards, three touchdowns, three interceptions).

Like Oklahoma, Saturday's opponent Arizona State tries to get as much speed as possible onto the playing field on defense. The Sun Devils have a better pass rush (at least, they did last year but haven't really gotten it going thus far in 2013) but aren't quite as deep and precise in the secondary. They are also prone to getting gashed by runs to the outside -- Wisconsin's Melvin Gordon went for 193 yards in 15 carries, and USC's Tre Madden and Justin Davis went for 250 in 30.

Rees is likely more capable of finding success in a run-first, play-action environment than one that sends everybody wide and simply asks him to make a play. If Notre Dame can run the ball well, the Irish defense could have enough success against an Arizona State offense that is often forced to bail itself out on passing downs (and just as often succeeds at it).

But last Saturday's game plan was misguided and predictable (Need to run? Bring in Hendrix! Need to throw? Go empty!). Throw it out and start over.