Fumblr: In celebration of Andy Reid, Alex Smith, and the undefeated Chiefs

In this week's Fumblr: the Chiefs sit atop the NFL, Peyton gets a turn at Manningface, Greg Schiano is still an ass, and a helpful guide to whether you should mess with Steve Smith.

Share All sharing options for: Fumblr: In celebration of Andy Reid, Alex Smith, and the undefeated Chiefs

I love that a team built around Andy Reid and Alex Smith* is 7-0 and the last undefeated team in the NFL. Reid and Smith: two effective but flawed cast-offs who wore out their welcomes by being themselves in the same place too long. Reid coached the Eagles to four consecutive NFC title games (and five in 14 years), but won only one of those and lost the ensuing Super Bowl. As the years went on, fans -- perhaps rightly -- focused on his predictability and poor clock management rather than his past success.

(*Yes, yes: the team is built around its talented defense. I see you, knowledgeable football fan. Let me enjoy the narrative for a moment.)

Smith, you may recall, was the first overall draft pick in 2005, selected ahead of Bay Area hero and Cal product Aaron Rodgers, who has since achieved some modicum of success. Smith languished for six seasons, the victim of a rotating cast of coaches and coordinators (not to mention his own limitations) before Jim Harbaugh turned him into an effective game manager in 2011. Smith would lead that team to the NFC Championship Game, playing perhaps his best game as a pro in a shootout with the Saints in the playoffs.

Reid, of course, was discarded for Chip Kelly, while Smith lost his job after a concussion allowed Colin Kaepernick to demonstrate that he was fast and exciting and could throw the ball with accuracy more than 20 yards downfield. The rest of the season, Smith gracefully accepted his role as mentor and cheerleader to Kaepernick, as evidenced by his enthusiastic reaction to a read-option touchdown scored by Kaepernick:

Andy Reid and Alex Smith: a combined 22 years in Philadelphia/San Francisco, and for most of those years they were somewhere between loathed and under-appreciated before their ousters. Fittingly, they were united in Kansas City, where the long-suffering fans merely wanted replacement-level stand-ins for the black hole of leadership and quarterbacking provided by Romeo Crennel, Matt Cassell, and Brady Quinn. And Reid and Smith are MUCH better than replacement-level! They're downright kinda good! And, when paired with a defense made of muscle and sharks teeth, they can actually mow their way through a soft schedule to the best record in the league.

This will end, of course. In a close game against an excellent team, the Chiefs will need Smith to generate a heroic comeback with difficult throws and/or solid late-game clock management from Reid. The Chiefs will lose that game, because Reid and Smith are Reid and Smith. Their limitations are known quantities.

The difference for Kansas City is that the end will happen in the playoffs. That's enough for Chiefs fans to be thankful for, and thanks is enough for Andy Reid and Alex Smith, two men who've rarely known gratitude from NFL fans.

While writing the above ode to the Chiefs, I went to Alex Smith's Wikipedia page, which has perhaps the saddest sidebar I've ever seen: 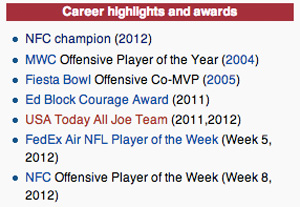 That's it. Two years as a starter in college, eight years in the NFL, and seven bullet points to annotate his career highlights, two of which were weekly awards. "Fiesta Bowl Offensive Co-MVP," in the long tradition of dressing up thin resumés, is perhaps the best way to sell a postseason performance against Pitt.

This week Peyton provided the bulk of the Manningface despite playing far better than his younger brother, because the Broncos played an excellent Colts team while the Giants played Josh Freeman on his first night seeing or touching a football (Pssst, go with that excuse, Josh).

20 more of this please pic.twitter.com/RAkGj6Njz5 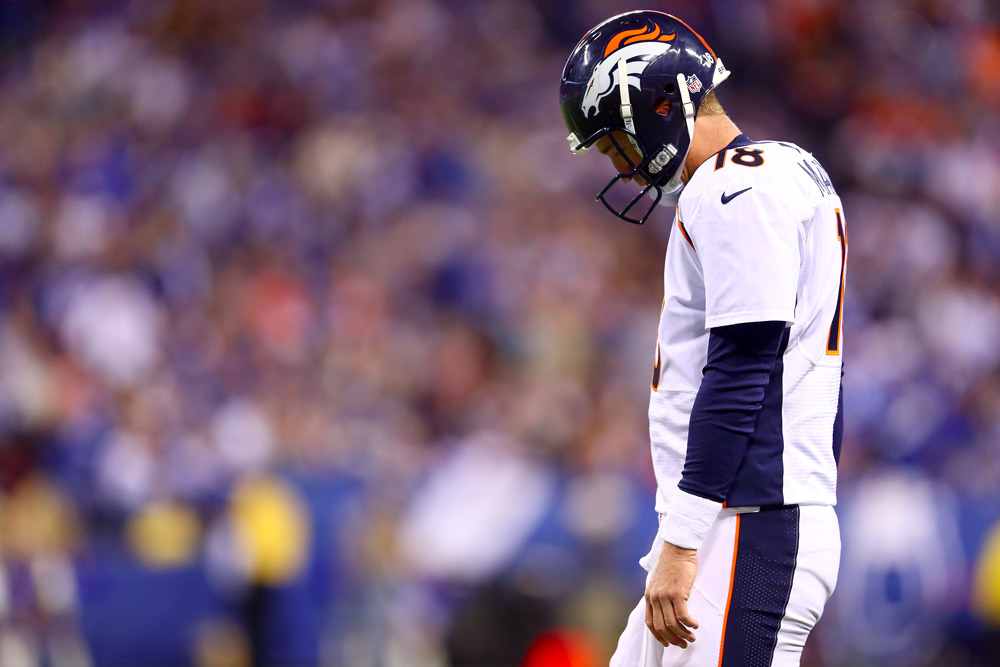 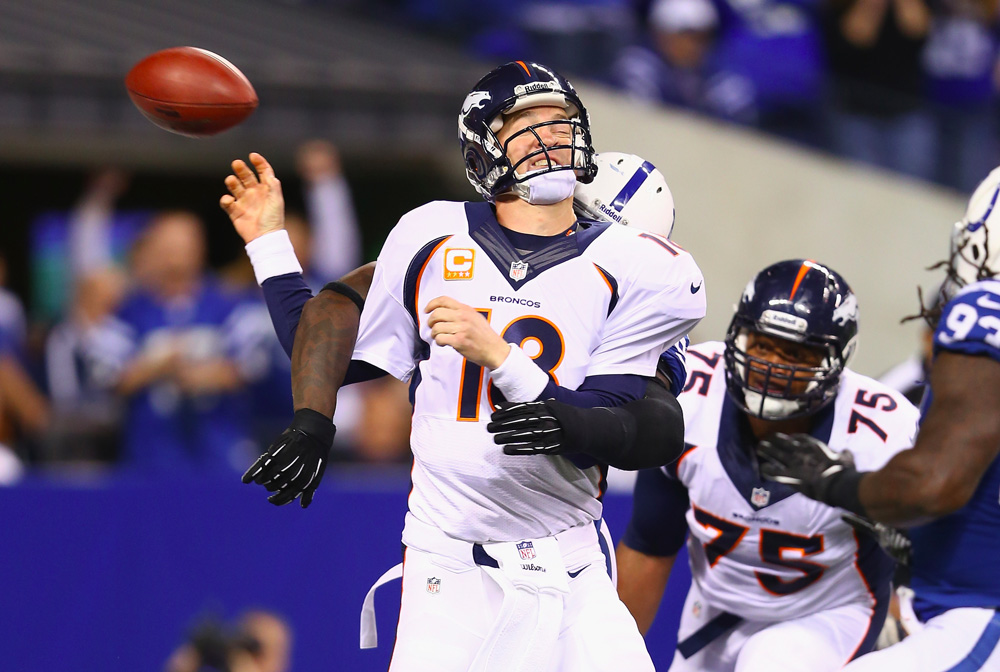 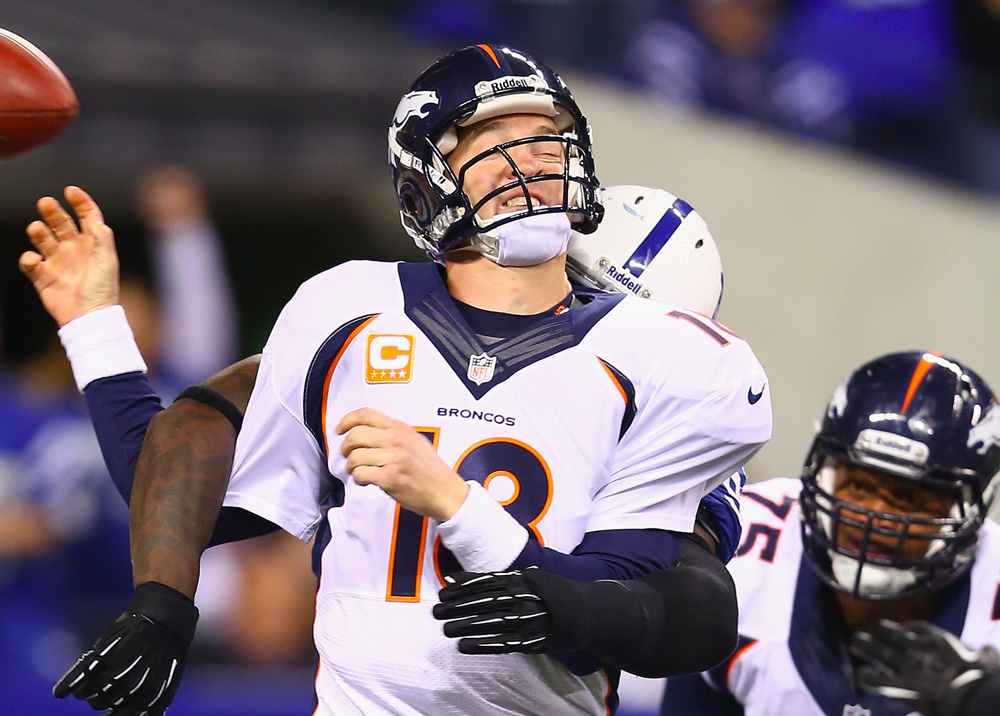 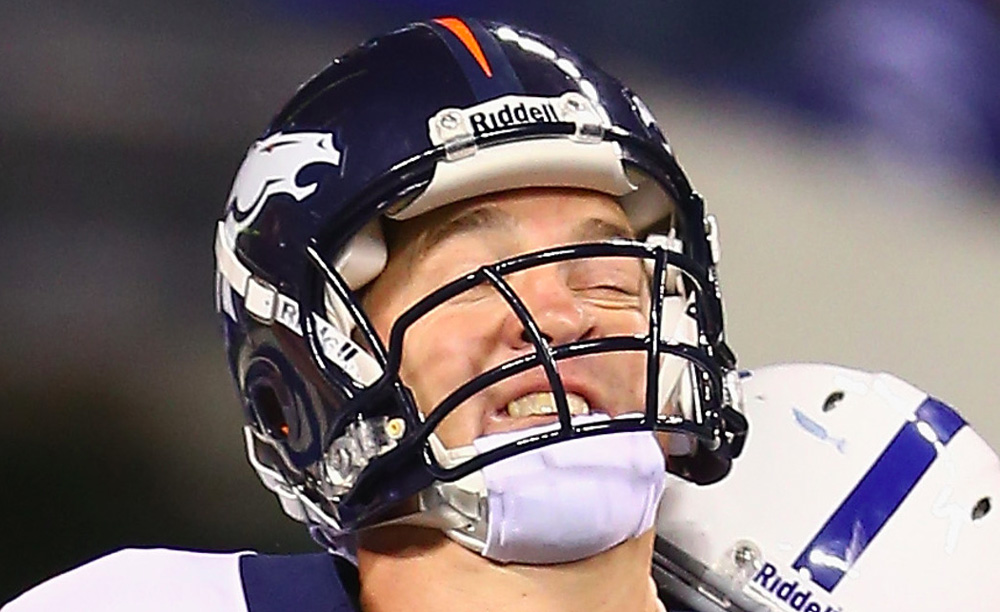 STILL THE MANNINGFACE MASTER. I mean, that's the kind of implicit communication and mental connection you can only hope your coach and a quarterback have after years together. True professionals.

SERIOUSLY DO NOT MESS WITH STEVE SMITH

STEVE SMITH WILL PUNCH A BABY

"Well, ya stand here in your SAFE shirt and keep those jackals in the stands from messin' with the action on the field. Keep the folks on the field safe, y'know?"

"Seems like I'm kinda near the action. Can I keep an eye on the field to avoid errant footballs or players running out of bounds?"

That's a throw on the run off his back foot that travels almost 50 yards in the air before landing softly in Sidney Rice's hands for a touchdown. And it might not even be the best play he made all game:

That's a conversion on a third down that would have otherwise been a sack and Arizona ball in a game the Seahawks only led by 17-13 in the third quarter. Russell Wilson helps me ignore the unstoppable menace of jellyfish blooms.

The Jaguars and Bucs are now the only remaining teams without a win, and no this is NOT God's judgment for all of Florida's wrongs -- although Greg Schiano does have the air of a Biblical menace about him. The Falcons, after all, sterilized their locker room with workers in hazmat suits, as much for the threat of MRSA as the viral stink of Schiano's failure, a cancerous negativity and stupidity that now includes banning the team's only Super Bowl MVP from bringing honors students to Bucs practices and using the team's best player in zone coverage despite the opponent only having one active wide receiver with a catch all season.

Jacksonville may have a worse team than Tampa Bay, but Greg Schiano is by far and away the worst coach in the NFL.

I had initially intended Clowney Watch to be a fun way to close out each Fumblr with a point-and-laugh scenario in the NFL, but I've found the Jaguars oddly sympathetic. So I'm pivoting to the Hater's Ball, with a nod to Hatin'-Ass Spurrier and the original Chappelle sketch. Best not to dwell on credits here. The point is, we find one terrible aspect of the previous week in the NFL, and we see what everyone said about that drudgery.

This week: Josh Freeman's disastrous 20-of-53 start for the Vikings in the most putrid game of the NFL season so far. Enjoy!

Mike Tirico just openly killing this game. "This is a terrible quarter of football. Both of these teams are just BAD."

We've tracked overthrows since 2006 ... in that span, no one has had more in a game than the 15 for Josh Freeman tonight

The Middle Ages was a terrible period, full of pestilence, peril, and injustice. On the other hand, it didn't have this Giants-Vikings game.

I watched this whole game. I've never felt so stupid. Not even when I bought the second Hootie and the Blowfish album.

These quarterbacks are putting on a clinic!* *overthrowing clinic not recommended for young players

"That's 16 overthrows for Josh Freeman... He's taken off his shoes and one of his socks and... actually, I think he's crying."

And don't forget: The Vikings play in primetime AGAIN next week! YOU'RE WELCOME, AMERICA. (funnels bleach)

worst thing for freeman: his first two games in a new offense are on national television. the shade is merciless.

"Can you believe how badly I'm blowing this?" pic.twitter.com/uANppfc5jQ