One of the annual rites of the American autumn is the release of the World Series program, and over these past 11 decades there have been some great ones. After a great deal of study and consideration, I have selected what I believe to be the 10 best of these (at least until next week's follow-up).

You might detect a bias in my selections, a bias toward full-color, non-photography covers from what I call the Golden Age of Graphic Arts, when painters, illustrators, and cartoonists ruled the printed visual world. This period began in the mid- to late 1920s and about ran its course by 1970.

For many years, both participating Series teams produced their own program cover. This was great because it put twice as many images out there, but it also produced some playful covers whereon one team's mascot is getting the better of the other's. (This was a common ploy on weekly college football program covers of this era as well, often with excellent results.) In 1974, Major League Baseball took over the publication of the programs and reduced it to one generic offering, usually with a stock-looking photograph or painting on the cover. For many years, the participating teams weren't even mentioned. Most of these are incredibly banal, although the 1985 program was an exception.

As you will see, there was a short return to glory in the 1998-2001 period. Since then, the covers have gotten less generic, and at least contain the names of the teams as well as player images. For our purposes, though, the problem is that they are cluttered with redundancies, and none really stand out from their own crowd. Which leaves us, instead with these gems: 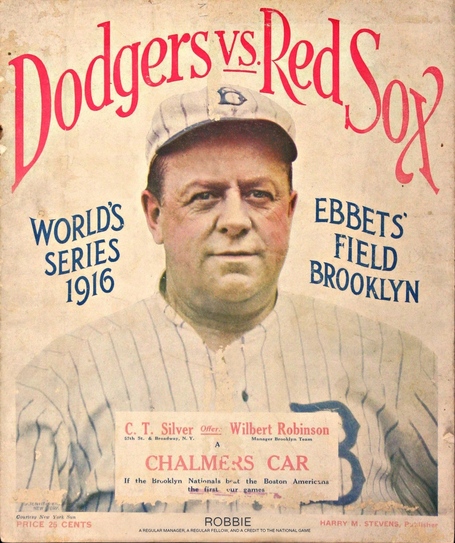 This one is here not so much for the design, but for what it says. First of all, it's Exhibit A in the cult of personality that surrounded Brooklyn manager Wilbert "Uncle Robbie" Robinson. Just under "Robbie" it says, "A regular manager, a regular fellow and a credit to the national game." Secondly, this program cover offers the man a written guarantee of a brand new Chalmers automobile if the "Brooklyn Nationals beat the Boston Americans the first four games." Chalmers was an upscale car in its day, so this was no mere trinket. Unfortunately for Robbie, the car deal was off the table by the end of Game 1 ... although his "Robins" very nearly came back from a 6-1 deficit in the ninth. 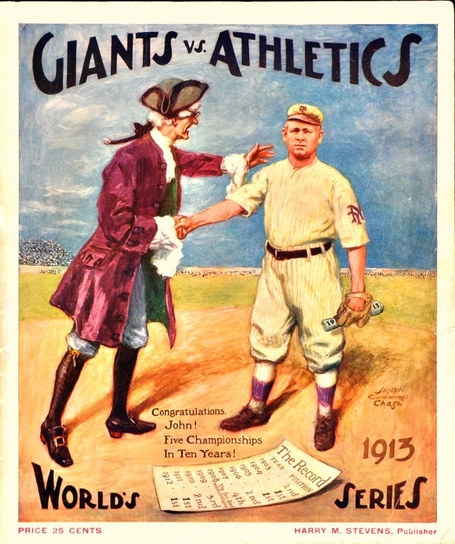 I love the look on John McGraw's face as he's congratulated by old-timey Philadelphian for all his recent successes. Mac seems to be thinking, "What's this guy's angle? He's trying to get into my head, isn't he?" Or maybe I'm just projecting that because I know the A's creamed every pitcher McGraw sent against them -- except for Christy Mathewson -- and took the Series in five games. The cover was painted by Joseph Cummings Chase, known mostly for his work in portraiture. 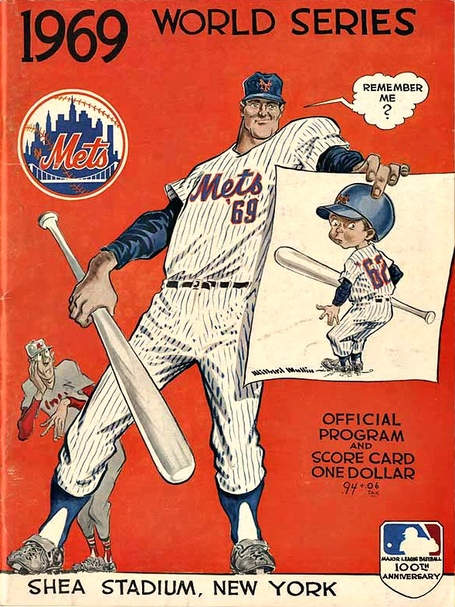 This was the fine work of veteran sports cartoonist Willard Mullin. About a month before the '69 Series, he had done a cover for TIME magazine that also featured the "kiddie Met" character. This cover does an excellent job of conveying the transformation of the Mets from regrettable losers to unlikely World Series participants. 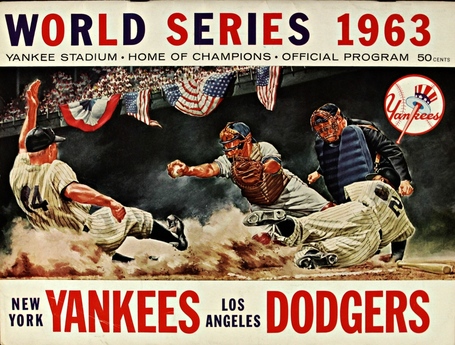 In its attempt to combat the usurpations of television, movies switched to wide-screen formats throughout the ‘50s and ‘60s Here we have the only wide-screen World Series program. In order to better show the action of this exciting play at the plate, the '63 program was turned on its side. This cover was not predictive, as the Yankees crossed the plate only four times while getting swept by the Dodgers. 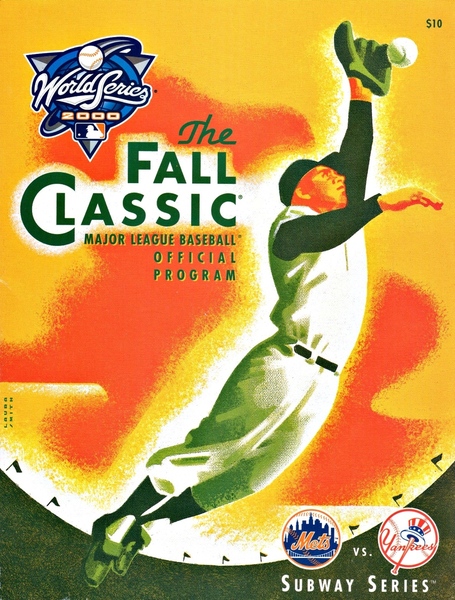 In 1998, World Series programs began a brief four-year renaissance of quality. They went back to stylized artwork and, while the covers were still generic, they at least jumped out at you in a way they hadn't done in decades. Two of them make this list. 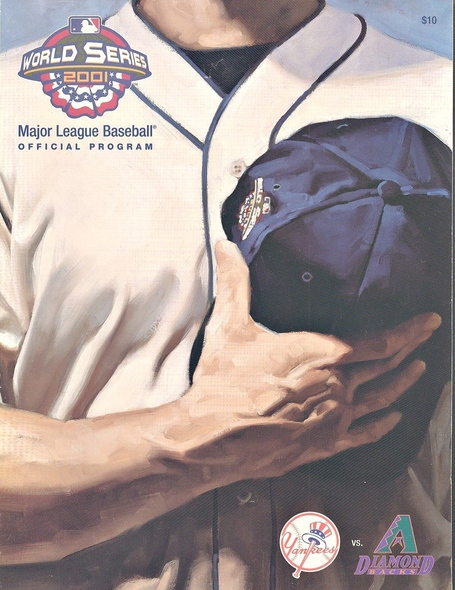 This entry marked a return to topicality. Unfortunately, it took a major tragedy to bring that about. This program is a nicely understated tribute to the victims of the 9/11 attacks. 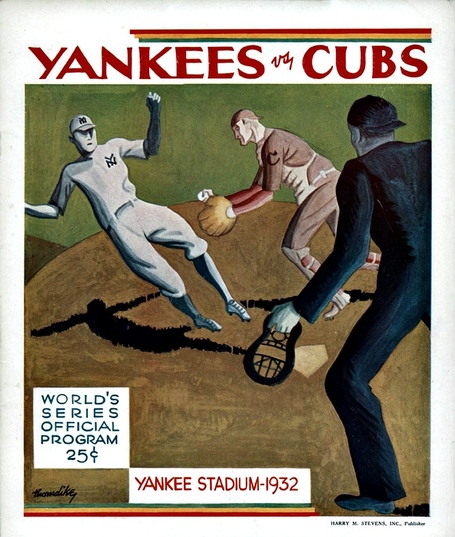 After a host of lackadaisical efforts in the early ‘20s, concessionaire extraordinaire Harry M. Stevens nailed it in 1932 with this stylized beauty. Its like would not be seen again until the 1998 program (which you'll see in Part 2 next week). 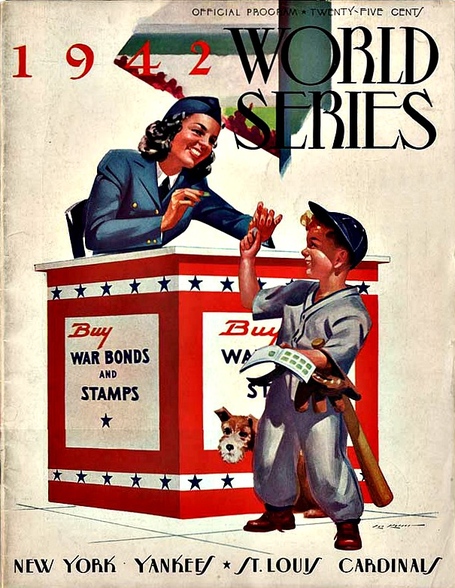 It's not Norman Rockwell's work, but it has that same idealized vision of America: a pretty girl selling war stamps to a scrappy youth while his scruffy dog looks on. I don't know about you, but this is exactly how World War II America's home front looks in my mind. 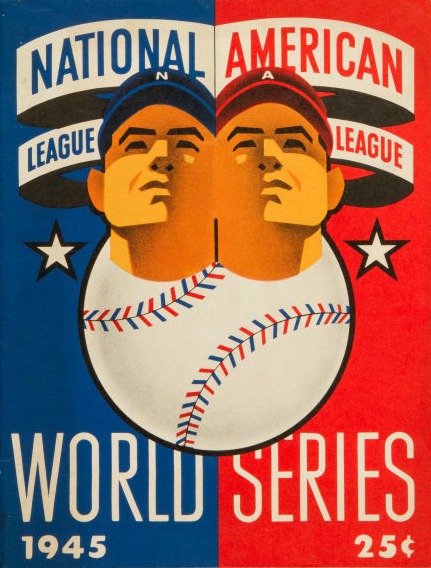 Just two months after the end of World War II, our alliance with the Soviet Union hadn't come completely undone just yet, so it's probably not all that surprising that the 1945 program seems to take a stylistic cue from something you would have seen plastered on a wall outside of Joe Stalin's house. If this program had come along five or six years later, there would have been a Congressional investigation into communist influences in baseball. 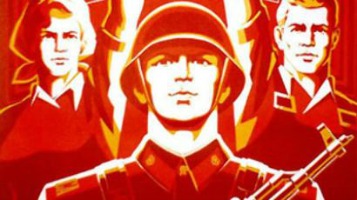 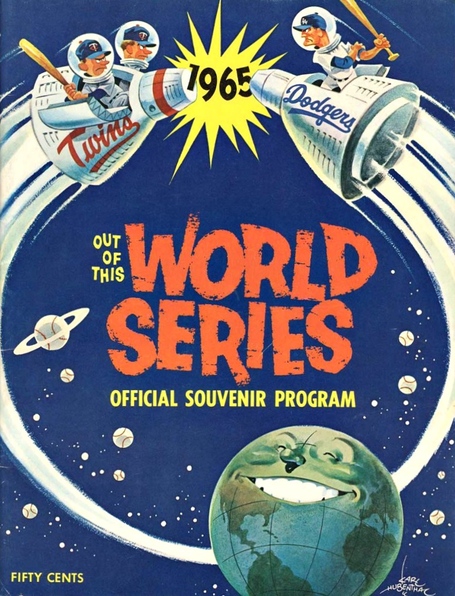 This is one of the most delightful pieces of baseball ephemera ever printed. It was the creation of Los Angeles sports cartoonist Karl Hubenthal, who left behind an impressive body of work. If the warring space capsules manned by Twins and Dodgers, and the grinning Earth (with longitude and latitude lines in place!) and the baseball-shaped planets are not enough to charm you, then how about the rename to "Out of This World Series?"