Breaking Madden: The Buccaneers and their 44 Greg Schianos

Buccaneers head coach Greg Schiano is off to an 0-6 start. Clearly, he does not have enough of his esteemed "Schiano Men" on his roster. Let's release everyone on the Tampa Bay roster, replace them with copies of Greg Schiano, and have us a nightmare.

Share All sharing options for: Breaking Madden: The Buccaneers and their 44 Greg Schianos

- After Tampa Bay started 0-4 this season:

- Schiano has insisted his players jump the line when the opposing team kneels the ball to end the game, and members of the Buccaneers have felt the need to apologize to their opponents afterward. This absurd behavior compelled Eagles coach Chip Kelly to run the victory formation out of the shotgun.

- After franchise quarterback Josh Freeman lost his title of team captain in a locker-room vote, rumors spread that Schiano had rigged said vote. Schiano denied the rumors, which are of questionable veracity. Shortly thereafter, it was leaked that Freeman voluntarily enrolled in the league's substance abuse program to manage his Adderall use. Schiano denied that he was the leak, but the NFL Players' Association said otherwise. At any rate, Freeman is off the team.

- Retired Buccaneer Dexter Jackson commonly takes local elementary-school kids to watch game practices as part of his case work. Schiano told Jackson and his kids not to come back because they were a distraction. "If they’re a distraction," said Jackson, "I’m worried about fans during away games. How can that be a distraction?"

Heading into Thursday night's game against the Panthers, Schiano's Bucs are 0-6, and his job is likely in some jeopardy. Something must be done, but it must be a something that holds true to Mr. Schiano's game philosophy.

Schiano has a special term for players who fit his mold: "Schiano men." I imagine that he knows more about coaching than I do, and that if the Bucs are failing, it's because their men are inadequately Schiano.

So this is what we're going to do. Credit for this idea goes to Twitter.com user Tim Cottrell.

@jon_bois I still think you need to have the bucs play with 22 schianos at some point tho, since what their situation needs is Greg schiano.

I released every single real-world member of the Buccaneers from the team, and replaced them with 44 identical copies of Greg Schiano. I'm pretty happy, I'll have you know, with how my virtual Schianos turned out. 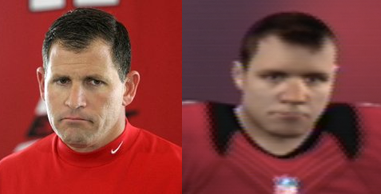 In what is perhaps my favorite video game Easter egg since Portal's "the cake is a lie," I found that mug as one of the game's pre-set faces. It bears such striking resemblance that I'm seriously wondering whether the folks at Electronic Arts just straight-up used Schiano's face. Everything's there, even the perma-frown.

While setting these Schianos' abilities, I tried not to go crazy. In fact, I tried my best to honestly assess what a 47-year-old Greg Schiano would look like on the gridiron. All 44 of our Gregs Schiano possess the following player ratings:

I'm ballparking Mr. Schiano at about six feet tall and 220 pounds heavy. He looks fairly well-built, and would realistically figure to fare better than most head coaches, though a 47-year-old's physical abilities certainly pale in comparison to those of any NFL player. His real talents lie in his football IQ -- awareness, play recognition, route running, et cetera. As a noted disciplinarian who emphasizes fundamentals and hard work, he has those attributes on lock.

I'll have you know that creating 44 Greg Schianos took me about 11 straight hours of staring at menu screens. He does not believe in half-measures, and neither do I.

The Panthers' defense is one of the very best in the NFL this season, but for the purposes of this experience, I wanted to ensure that these Schiano men were playing against categorically non-Schiano men. As usual, I recruited them on Twitter.

if you would like to be in the next Breaking Madden, please tell me why Greg Schiano kicked you off the team

Y'all folks submitted nearly 800 responses, and I had a whale of a time narrowing them down to just seven. Please welcome the newest 7-foot, 400-pounds, flawless additions to the Carolina defensive unit:

Don't bring any work of literature around Greg Schiano that isn't authored by Tom Clancy or Stephen King. And if it's Stephen King, make sure it's not that book with the fella holdin' the flower on the cover. Flowers are what happens when grass gets cute.

If you don't shave with a giant dagger, don't shave at all. Blood is nature's shaving cream.

After looking it up, I think Greg Schiano might have the most profoundly anagrammable name in existence. Check these out:

I could keep going and going. Try it. It's a treasure.

It's just as well, dude. If someone starts jamming that, he'll start singing the lyrics. "Yo! What up? It is crime time in the city. It is time for the Sopranos. Watch out for James Soprano, he is a number one criminal. I am Greg Schiano and welcome to my song, idiots. Get out of my song! Get out of my song! The Sopra-nooooooooos."

He became angry with you, friend, because he knows that the wood-chopping game has been taken over by folks rich enough to go camping and live in cabins on purpose, and he'll be damned if the lower class takes that away from 'em.

I don't get all of that, but I get part of it, especially if you were dining in the solarium. The window's curved! You can see out of the ceiling! Are you in a restaurant or a greenhouse or a spaceship? The exotic lighting contributes to a general reality-warping disarray. I once walked in with some fries and a large chili, and walked out pulling a wooden wagon full of glowing scrolls containing language I didn't understand. I tell people I am 31 years old to be polite, but I am actually 37,814. That's Dave's way.

When I was 16 I participated in a church scavenger hunt. We scoured yard sales and friends' garages to come up with the strangest stuff we could possibly find. Upon returning to the church, this kid on my team was beyond excited. "Come here, dude," he said. "You gotta see this."

It was an old microwave with the door missing. "See! Look!" He turned it on and stuck his head inside, and was rather annoyed with me after I frantically ran over and unplugged it from the wall. Church kids, man. The Bible lacks a Microwave Testament, and sorely.

With Madden's default rosters, the Buccaneers possess an overall team rating of 81, which is rather good. Let's check in on their rating after gutting their roster in favor of 44 identical Gregs Schiano. 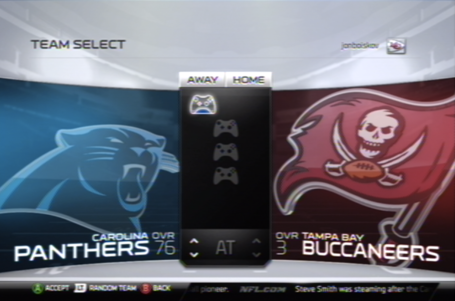 Oh goodness gracious. This was my first clear indication that things might proceed more horribly and wrongly than Breaking Madden has ever seen.

This time around, I played as the Panthers for every single offensive, defensive, and special-teams snap. I never took control of the Buccaneers, because I wanted our Schianos to make every decision of their own volition.

I called a lot of man coverages, and I blitzed on nearly every play. Quarterback Greg Schiano had about ...

... 1.2 seconds available between receiving the ball, and having a non-Schiano man all over him. To his credit, Greg Schiano did find a few open targets, namely Greg Schiano, Greg Schiano, and Greg Schiano. They were all short gains, though, and the Bucs never managed a first down.

That looks to me like a Stone Cold Stunner. If you'd like to offer more informed insight in the comments, please do.

After a while, my dudes appeared to grow bored with conventional tackling, and started trying to earn style points. Here is Tomas Rios recording a sack using nothing but one of his arms.

Not to be outdone, Rivers McCown elected to sack Schiano with zero of his arms.

These were not anomalies. I've never seen such a suffocating defensive performances. The Panthers finished with 38 sacks -- thirty eight! -- and perhaps this GIF can help to illustrate how that happened.

There's surely a Football Explanation for what happens here, but I prefer to imagine that these Schiano men finally learned the meaning of the word "quit." Look at Greg Schiano, Greg Schiano, Greg Schiano, and Greg Schiano. In unison, they flock to the bench in the middle of the play, and they only turn around upon realizing that they are running toward the wrong bench. Meanwhile, quarterback Greg Schiano sees the Panthers' line descend upon him like an avalanche, and Caleb Leach runs in the abandoned football for an easy touchdown.

I'm not gonna spoil the final score just yet, but know this: the Panthers' defense scored 12 touchdowns all by itself. As in, 72 points before the PAT. These monster lineman had a remarkably easy time forcing fumbles, picking up the ball, and running in for six.

Eventually, though, even this can get boring, and their interests eventually drifted to other things. Look, here's Chris Heller trying to give Tomas Rios a piggyback ride.

That was too brief, and beautiful while it lasted. To borrow from Robert Frost, nothing gold can stay.

Okey-doke, let's check in on the Bucs' defensive efforts:

This game took me about five hours to simulate from start to finish, because nearly all the plays were scores, changes of possession, or injury timeouts that stopped the clock. That's an awfully long time to subject virtual mortals to such a nightmare. These Schiano Men eventually abandoned their Schiano ethics entirely: observe No. 26 (Greg Schiano) above as he goes after the ball carrier by a) turning the wrong way and b) flopping.

This GIF neatly sums up the nature of the Tampa Bay defense. Those are Jonathan Stewart's legs, and that is a Buccaneer being rolled out before them like a red carpet:

I elected to run the ball most of the time, since Stewart and Cam Newton were more than capable of scoring with their feet on just about every play. But when I did throw with Cam, it was really something.

Schiano men lead. They do not pursue.

By the end, Greg Schiano and his teammates were just ... broken.

Schiano men play possum after conflict. Never before. They are curious in that way.

Not making this up:

Now, according to the game's scoreboard, I had only won 292-0, and scored zero points in the fourth quarter.

I wish I could offer substantial proof that I did indeed score 412 points. The thing is, the game just stopped counting. The scoreboard was stuck. I had to start counting manually, and in so doing, I think I really may have approached the ceiling of how many points can possibly be scored in a 60-minute football game.

I'd imagine that the ceiling is probably closer to 700, and only if the team receiving every kickoff dropped the ball in the end zone and stared at it until an opponent took it and scored. Between two teams that are actually trying -- real or virtual -- this might be around the max. 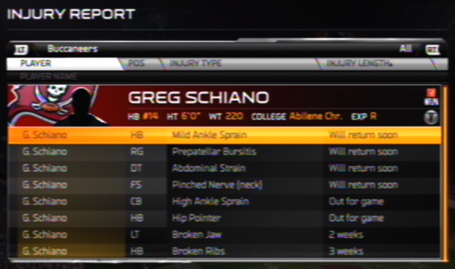 This is the single most terrible, terrifying episode in the history of Breaking Madden. Take it away, Slint.

For more awful adventures in football video gaming, check out the rest of our episodes of Breaking Madden.