Finding the likeable things about the Red Sox and Cardinals

They exist! They're not all bad, after all. You just think that because of the silly team you chose.

Share All sharing options for: Finding the likeable things about the Red Sox and Cardinals

You've already heard people complain about this World Series matchup. You'll hear and read more over the next week. Here's me complaining on Monday. But that was tongue-in-cheek, as are a lot of the complaints. It's annoying, sure, but it's still baseball. It's still fun.

But the tongues will come out of the cheeks around Game 3. You'll snap when you hear a conversation like this on Fox:

Tim McCarver: In my opinion, it isn't the having of the beards that is so unorthodox, but rather the decision to grow the beards in the first place together as a team for the first time.

The sound your brain will make will either be a "sproink" or a "skurnnk." Don't bother with the doctor, you're already gone.

But all this negativity. Tsk tsk. The World Series is here. We'll talk about this forever. Ruth caught stealing to end it. Mazeroski with the walk-off. Through the legs of Buckner. Oh, god, Nelson Cruz, what are you doing? The World Series is awesome. Dwelling on the negative stuff is easy and fun for a while, but it's an overall drag.

Just seeing if you were paying attention.

Those are the living legends, the guys who who still roam around the big games like this. If you want the legends who have passed, you have two of the greatest ever, Ted Williams and Stan Musial. But I'll stick with Yaz and Gibby.

Have you ever heard, in your life, someone say "Ugh. I can't stand Carl Yastrzemski" or something similar about Gibson? No. Unless Gibson broke your uncle's wrist with an inside fastball, which is possible. But it's more likely that you haven't heard anything like that.

Everyone loves Gibby. Because if you didn't, he'd hit you in the back with a baseball, and those things hurt. Treat yourself and stare at this game log every other month or so. From June 6 through July 30: 11 games, 11 complete games, 99 innings pitched, three runs, 0.27 ERA.

That's ludicrous. That's almost impossible. It's one of the best totals in the free-agency era. And even if you're annoyed at the team for being so good (or for making it through the postseason gauntlet again), you have to appreciate how that's sort of the Platonic ideal when it comes to building a baseball team.

Okay, it's grosser when the Red Sox do it, but it's still cool. When your team is awful, you'll need a beacon of hope. You don't want to think, "Okay, in 20 years, we'll get a Gerrit Cole, too, just like what happened to the Pirates after they were patient!" You want the team to improve, and you want it immediately.

Here's what the Red Sox started against the Yankees on Oct. 1 last year:

It was October. Expanded rosters were in play, and the Red Sox didn't care about the results. But that's not the whole story. After Adrian Gonzalez was traded, there were plenty of everyday lineups with Scott Podsednik leading off and James Loney hitting fifth. It was a mess. A hot, sticky mess. And a few things here, a couple things there, a little elbow grease, and World Series!

You can take comfort in that progression when your team is awful. 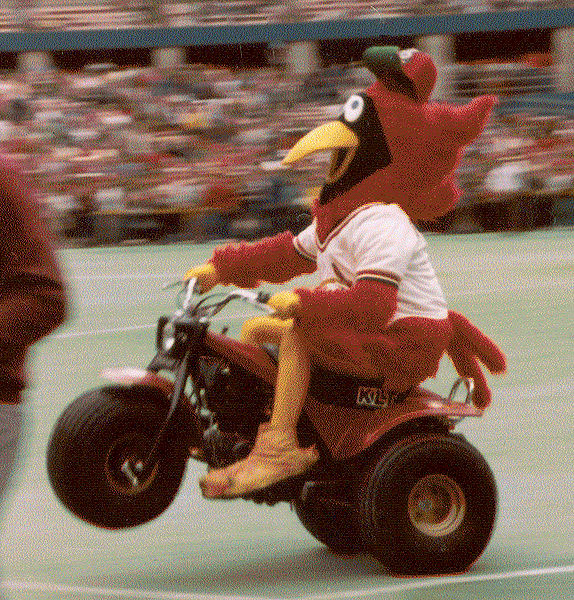 He's like a coked-up Braque painting, but I'd still let him watch my kids. It's the dangedest thing.

5. Either Yankees fans or Red Sox fans will be upset after this series

Okay, that's not exactly a specific thing to like about one of these teams, but it's a glass-half-full thing that you never really thought about until just now. Both teams have had extraordinary successes over the last decade. One of them will be left to mutter something like man baseball stinks that stunk back there everybody stinks

6. Say, both of those teams have excellent SB Nation blogs

Have you visited lately? The Red Sox have Over The Monster, and the Cardinals have Viva El Birdos. Won't you check them out?

7. The matchup is sort of compelling

Did you know the Red Sox were 123 for 142 in stolen-base attempts this year? That's an 87-percent success rate. And they're facing a five-time Gold Glover behind the plate who's the best active predator of base stealers in the wild.

So before you complain, think about the good things about these franchises Then complain. Loudly and repeatedly.

• Is Allen Craig just what the manager ordered?

• What to do with Max Scherzer