Fun Rankings: Helping you decide which NBA teams to follow this year

You can't possibly watch every NBA game and pay attention to every NBA team. This guide will help you figure out where you should prioritize your basketball attention span.

Share All sharing options for: Fun Rankings: Helping you decide which NBA teams to follow this year

There's no need to watch all this damn basketball.

Last year, 30 teams played 82 games each for a total of 1,229 games. (One got canceled.) The best 16 then got to play additional games -- 70 in total -- to decide the two best. Those two teams then split six games in increasingly preposterous fashion until the entire season came down to just one game. No matter how many hours of hoops you logged in 2012-13, you were sitting and waiting just like the rest of us, with no clue who would win.

Some deride the NBA regular season for being unnecessarily long, and they aren't wrong. We could probably bang this baby out in about 41 games and have very similar results. But we don't do that because a) the NBA likes money and b) it's, you know, fun. We watch the sport for entertainment, and although individual regular-season games might not mean a ton, we watch a ton of them.

We watch our own team religiously. We watch not one, but two games featuring other, random teams every Thursday night. We get excited when the Sunday ABC game comes around. Some of us buy NBA League Pass so we can watch whatever game we damn well please.

Hence, the fun rankings: the teams we simply enjoy watching the most. They're obviously subjective -- these are MY fun rankings, and you best get your damn hands off of 'em -- but I think there's a few things we're looking for here, some of which we can find via stats, some of which we can't. It's some combination of actual basketball success, speed, offensive brilliance, youth, the characters involved and the indescribable "it" factor, which some teams have and some teams lack.

Are the Boston Celtics' additions the least happy millionaires in the world? pic.twitter.com/sNfwDDHFB1 (via@SaulitosWay)

28. Toronto Raptors: All the fun of a team that probably isn't going to contend for the playoffs with none of the youth that makes pointless basketball interesting. The Masai Ujiri era might be good down the road, but for now, we have Rudy Gay.

27. Brooklyn Nets: Wisdom around the league is that adding Paul Pierce and Kevin Garnett makes this team a contender, but it also makes them even older and more joyless than their old, joyless team last year. As a Brooklyn resident, I've experienced the intense indifference to this franchise firsthand, and I look forward to Garnett echoing that indifference every time he half-heartedly rams his head into a basket stanchion.

26. Orlando Magic Come for the beginning of Victor Oladipo's career, stay for ... fill in the blank, Magic fans!

25. Philadelphia 76ers: I was kind of excited for Nerlens Noel and Michael Carter-Williams. I guess I can be excited for half of that now that it sounds like Noel may miss the entire season. The tank brigade rolls into action.

24. Atlanta Hawks: This is a team that will win roughly half of its games and either lose in the first round of the playoffs or barely miss them. WHY AREN'T YOU MORE THRILLED?!

23. Utah Jazz: The mad scientist in me is intrigued by taking the vital organs from last year's middling Jazz squad away and asking this one to walk. The human in me wants to call the police.

22. Portland Trail Blazers: Damian Lillard started his career off brilliantly last year, and in case you haven't noticed, "really talented guards being allowed to do whatever they want" is something I find mildly interesting. LaMarcus Aldridge is a legit star, but he doesn't seem to have his heart in Portland.

21. Indiana Pacers: This team is really, really good, but they're so, so intent on slow-paced, blisteringly-good defensive basketball that isn't much fun to watch. Paul George is brilliant, but watching this team is to watch the combo of lengthy perimeter defense and Roy Hibbert squeeze the life out of opposing offenses. I'm not into snuff.

19. Sacramento Kings: IT'S YOUR TIME TO SHINE, DEMARCUS COUSINS! (Note: SB Nation takes no responsibility for the after-effects of DeMarcus Cousins realizing it is his time to shine. Do not watch the Sacramento Kings around the faint of heart.) 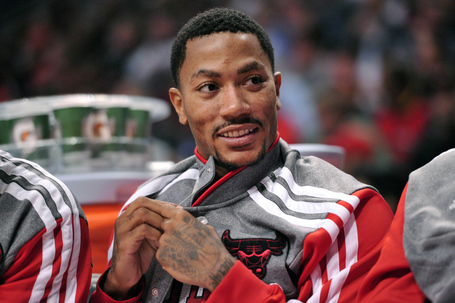 17. Chicago Bulls: Derrick Rose is back! That's enough, even with the Bulls exhibiting Indiana-like defensive characteristics. This team was an interesting watch in last year's playoffs when it was just Joakim Noah, Jimmy Butler, and Nate Robinson hooking up to respirators and playing 48 minutes a night, but now they'll be constructed like the Rose-centric playoff contender they should be.

15. Oklahoma City Thunder: What, you're gonna avoid Kevin Durant? It won't be particularly fun as long as Russy Westbrook's out, though.

14. Los Angeles Lakers: I don't know what to expect from the Kobe Bryant Healed Achilles Tour, but I do know that he's going to milk it for every second and pass somewhere between .1 and .24 times per game. He's incredibly talented and twice as egotistical, and without having a reason to give a crap this year, we might see his pièce de résistance.

12. San Antonio Spurs: If you ignore the names and faces, they don't actually play boring basketball. You watch the Finals last year? Good stuff, right? Turns out over the past 15 years, Gregg Popovich's teams have gone from playing suffocating defense and an offense good enough to get by to playing really great offense and defense good enough to get by. But you can't ignore the names and faces, and there's not much that's new about them, so they can't be much fun.

11. Milwaukee Bucks: I'll be honest: if there's one player who I would watch every minute of in the NBA this year, it would be Giannis Antetokounmpo. It's not immediately clear if he's ready to play in the NBA, but it is clear he's got a silly last name and sillier body proportions. Things will be much more free without every game developing into a Monta Ellis-Brandon Jennings standoff/referendum on contract negotiations.

10. New York Knicks: The basketball itself isn't actually fun -- it's mainly Carmelo Anthony hoisting, which leads to a good record, but not necessarily aesthetic beauty or postseason success -- but we have two of the league's least predictable humans in J.R. Smith and Metta World Peace. SOMETHING is going to happen, here.

9. Detroit Pistons: Weirdness is going to happen here. I don't know what a basketball team with Josh Smith and Brandon Jennings is going to look like, but I'm so very scared of it. Like, not in an "I'm scared for my basketball team to play them" way, in like a "horrified onlooker at a cross-breeding experiment with the potential for massive failure" way.

8. Memphis Grizzlies: There's nothing pretty about the Grizzlies' bogged-down, physical defensive style, but there is something spectacular about the unabashed glee Zach Randolph, Marc Gasol and Tony Allen have about playing gritty, grinding, grimey hellball. They've turned the gravity meter up to 11, and they're cackling like madmen about it. 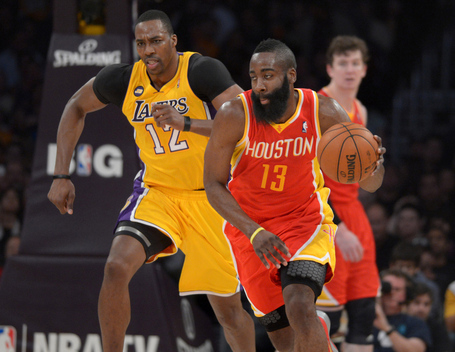 7. Houston Rockets: After leading the league in pace last year, James Harden's squad was set to be close to the top of this list. The Beard was joined by excitable youngsters in Chandler Parsons and Jeremy Lin and a budding center in Omer Asik, and were in the prime good-enough-to-be-make-the-playoffs-but-not-elite-so-they're-still-an-underdog range that's optimal for enjoyability. But when you throw in Dwight Howard, your palatability immediately drops about 57 percent, a figure that's actually bolstered by the fact that Howard thinks he's the most fun, well-liked man on the planet.

6. Miami Heat: The only uninteresting thing about the Heat is that they've been aggressively good at basketball for such a long time that it's become routine. (See Spurs, San Antonio). LeBron James and co. are a high-flying highlight machine at both ends of the floor, but the fact that you've just seen them win two straight titles -- and that they'll be on TNT and ABC approximately 592,318 times this year -- bump them down the fun rankings.

5. New Orleans Pelicans: PELICANS! New Orleans' squad has a new name and a new roster that's as oddly shaped as the pelican itself. Between Jrue Holiday, Tyreke Evans and Eric Gordon, we have three guards who can be All-Stars at their best and, you know, not All-Stars at their worst, and all of them generally need the ball a bunch. And we're still figuring out Anthony Davis' NBA potential. I'd watch these baby Pelicans fly, or at least stumble about awkwardly while trying to get airborne with their comically oversized beak and not-yet-large-enough wings.

4. Denver Nuggets: Even with the front office and Andre Iguodala gone, we still have two things: A squad built for up-tempo offensive play running amok at high altitude, and JaVale McGee, NBA starter. THOSE TWO THINGS ARE MORE THAN ENOUGH.

2. Cleveland Cavaliers: Kyrie Irving's first two years in the league have established that he's pretty good at basketball. Now we get to watch him on a basketball team that might have a shot at making the playoffs, and he's got a really intriguing cast of bigs to mess around with. If Andrew Bynum is healthy, if Anthony Bennett was worth the No. 1 pick, if Tristan Thompson is as good as he was last year and if Anderson Varejao can resume floppy-headed weirdodom, this team will be can't miss. If not, it's still Kyrie balling out with the postseason in sight. 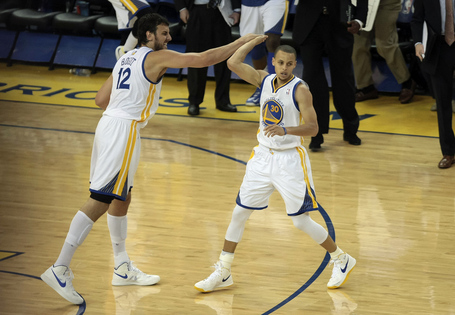 1. Golden State Warriors: Pure, uncut basketball giddiness. Two things that assuredly belong in consideration of fun basketball are pace and 3-point shooting. The Warriors were the fourth-fastest team in the league last year and they shot a preposterous 40.3 percent to lead the league by a long shot at taking long shots. Stephen Curry is historically good at throwing 12-inch globes into 24-inch cylinders. He can do it from pretty much anywhere, and does so pretty much whenever he wants. When he heats up, there's no stopping him. Klay Thompson chips in and now Iguodala is here to help this team contend. There's no downside.