Introducing the Green Triangle: where NBA shots are most efficient

There are three types of shooting possessions in the NBA far more efficient than the rest. Which teams capitalized most on those zones last season? Introducing the Green Triangle, which will help us answer this question.

Share All sharing options for: Introducing the Green Triangle: where NBA shots are most efficient

All shots are not created equal. This much is obvious to anyone who watches the NBA. The value of a given shot varies based on who is taking it, where on the floor it is taken, how it is set up and how it is defended. Open shots in any spot are better than shots that are closely defended. For jumpers, catch-and-shoot tends to be more effective than pulling up off the dribble. And there are certain pockets on the floor in which shots are more likely to go in; intuitively, the most effective pocket is very close to the basket.

There's also a whole area of the floor in which shots are more valuable when they go in: behind the arc. These shots can be converted at a lower rate while still being more valuable to a team in the end. One particular type of three-pointer, the corner three, tends to be even more effective than other threes. (I've always been curious about the reasons for this. My hunch is that the baseline inhibits help defense -- there are fewer places from which help can arrive. In addition, it's more difficult and dangerous to overcommit when jumping out on a player shooting a corner three than one above the break because you're likely to end up in the second row. It'd be interesting to see data on whether corner threes tend to be less closely defended than other threes. I think this may matter more than the shorter distance, especially considering conversion rates of long two-point jumpers.) 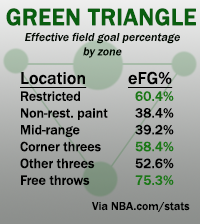 So, as the chart at right shows with data from 2012-13 from NBA.com/stats, we have these three types of shots -- shots in the restricted area, corner threes and free throws -- which are much more effective than all other shots. It's worth noting that league average effective field goal percentage for all shots (including free throws) last season was 53.4 percent.

The three shot types that make up what I'll dub the Green Triangle all have average conversion rates well above that. All other shot types are less efficient than the league-average shooting possession. (Obviously, above-the-break threes are still better than mid-range jumpers and the weird in-between shots.)

It has long been known that teams who take a greater percentage of their shots from the mid-range have, on balance, less efficient offenses. There are always exceptions -- particularly, the Dirk Nowitzki Mavericks -- but it's a strong, consistent correlation: if you take more mid-range shots at the expense of closer shots and threes, your offense is likely to be less efficient than teams which take fewer mid-range jumpers.

There is also a correlation between teams whose shooting possessions include more shots from the Green Triangle and offensive efficiency. (The correlation for 2012-13 was 0.5.) It makes intuitive sense: if you take more shots with a high likelihood of conversion, you will likely score more points. What's key is that the correlation has nothing to do with actual conversion. There's nothing in calculating the Green Triangle shot frequency to speak to whether individual teams are good at hitting those shots. Just the mere frequency of Green Triangle shots speaks to offensive efficiency in a fairly strong way.

There are, of course, exceptions. This map of teams' Green Triangle frequency and offensive efficiency shows them. 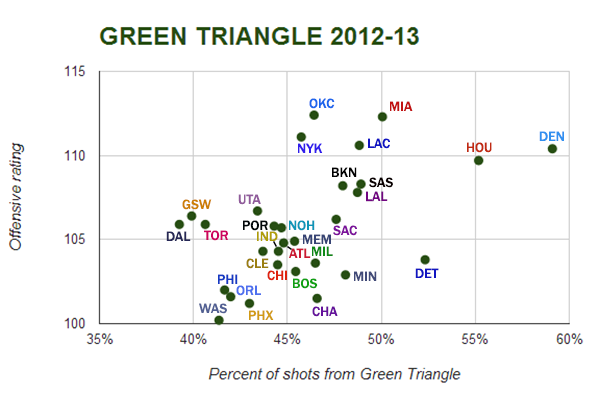 A couple of notes on the under- and overachievers:

* The Pistons had the third highest Green Triangle frequency in 2012-13, but finished fairly low in offensive efficiency (points per 100 possessions). Contributing factors include Detroit ranking No. 29 in free throw percentage (shooting less than 70 percent) and No. 27 in turnover rate.

* The Warriors were perceived to be a stacked offensive team, but actually finished the season outside the top 10 in the league (No. 11). That said, with just the No. 29 Green Triangle frequency in the NBA, they did benefit from Stephen Curry's wily exploits above the break. As a primary ballhandler, Curry took a lot of threes, but only 15 percent of them (89 of 594) were from the corners, per NBA.com/stats. He also drew relatively few free throws for a player of his shooting volume.

We should soon be getting better data on shot defense, as in how closely shots are defended. I think that, combined with this sort of zonal analysis, is the breakthrough we need in measuring shot creation and passing. When we can consistently and easily assign expected point values to each attempt, we can then assess how valuable the creation of that shot (whether by creating off the dribble or via assist) over a baseline "replacement level" shot value. SportVU data should be a big help along these lines, though it may take a couple years' worth of data to make it sing.

• Saving his own soul first: The redemption of a Globetrotter