NFL Debrief: Waiting for the man

The Dolphins are dying. Dallas can't stop itself or its players from meltdown. And what about this Chip Kelly as an NFL coach thing? Accompanied by the late Lou Reed, Debrief explores.

Share All sharing options for: NFL Debrief: Waiting for the man

I don't know of a good way to connect Lou Reed to this week's NFL games. Reed's lyrics give you enough room to stretch and bend themes to make it fit. I'm not the guy to do it, no matter how easy it is to compare the dizzying highs and lows of Heroin -- just like addiction itself -- to watching the New York Jets this season.

News that Reed died hit me about an hour before the first round of games started. I couldn't separate the news from the task at hand. Distorted pop hooks scored the Lions' last-minute, game-winning drive. David Bowie's backing vocals kicked in at start of the second half of the Denver-Washington game.

There are smarter Lou Reed takes out there than anything I that can give you. You should read some smart takes right now, because much of the NFL world will be talking about Detroit's last-minute comeback against Dallas, a great game rife with silliness.

Calvin Johnson found a way to cram another accomplishment into his career. He totaled 329 receiving yards, coming thiiiiis close to breaking the single-game record (Flipper Anderson had 336 with the Rams in 1989). Johnson added a touchdown and a whole lot of nice guy.

Dez Bryant stumbled over a comparison to himself and Megatron earlier in the week. It gave Detroit some bulletin board fodder, and the rest of us a sideshow to enjoy. Every so often someone screws up the talking points for the Cowboys, and it's part of what makes them so entertaining.

Dallas mostly delivers on the promised zaniness, too. Jason Garrett, Bill Callahan, Jerry Jones' guru or whoever calls the plays now tried to run out the clock with less than two minutes. Tyron Smith was flagged for holding on fourth down. Detroit declined the penalty, stopped the clock and got the ball back with 1:14 to play. The Lions scored to steal a 31-30 win in a game where they turned the ball over four times.

Diva receivers are the most popular heels in sports

Bryant's sideline sideshow turned out to be the big story here. Bryant's teammates circled the wagons when pressed about the receiver's tantrums. Something about being "passionate" and trying to rally his teammates. His haphazard receiver comparisons resurfaced. Diva receivers are the most popular heels in sports.

Maybe Bryant was just disappointed about only being targeted six times. If so, he might have been sort of justified. Only two of those targets came in the first half of the game. His first catch was a circus grab over two defenders in the end zone. He had a good case for more looks from his quarterback.

The win keeps it a two-team race between Detroit and Green Bay for the NFC North crown. It sets up what should be a Thanksgiving Day treat between the two teams in Detroit.

For Dallas, the results aren't so encouraging. Another win given away in the second half. The Cowboys literally had a 99 percent probability of winning that game with less than two minutes left. Monte Kiffin's defense surrendered 600 yards and failed to put away an opponent that turned the ball over four times. The Cowboys still lead the NFC East at 4-4, but this loss keeps the race much closer than it should be.

There are better ways for adults, professionals to express their frustrations than going full toddler on national television. It's not worth psychoanalyzing his motives or dredging up his past, like some have done because his personality and his background are a lightning rod for Horatio Alger bullshit and our expectations for how athletes are supposed to act. Appropriate or not, it's worth pointing out that Dez, and his teammates, had plenty to be upset about again this week. 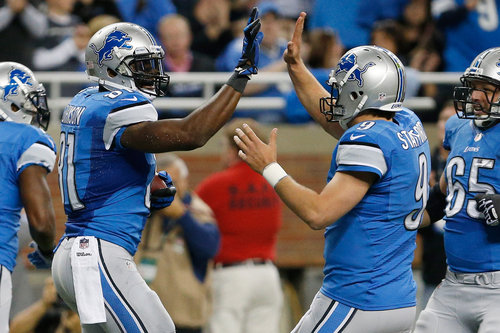 A quick look back at key points from Sunday's Week 8 slate of games.

Ryan Tannehill excels at crushing expectations. He started the game 10-for-17 with two touchdown throws that staked the Dolphins to a 14-0 lead on the road against the Patriots. Miami led 17-3 at halftime, and then it was all downhill from there.

The Dolphins blew it in the second half, and New England took advantage of a team-wide Dolphins failure. The Patriots scored 24 unanswered points in the second half, helped along by two Tannehill interceptions. The second-year quarterback got no help from his teammates. Free agent bust Mike Wallace dropped a touchdown pass in the third quarter. The offensive line was better with Bryant McKinnie replacing Jonathan Martin at left tackle, but "better" for this line is just another way of saying "no place to go but up." Tannehill was sacked six times, all in the second half.

Miami's offensive line can't take all the blame. Tannehill had some trouble with pressure, and skill position players missed blocks too. The sack count is up to 32 for the season for Tannehill. He's on pace to get sacked 73 times this season, and that casts a shadow over his development as a player.

Chip Kelly will be joining Dez Bryant as the toast of talk radio this week. For the first time all season, the Eagles offense failed to produce a single point. Philadelphia's lone score came when the Giants botched a snap on a punt in the fourth quarter -- your weekly reminder that the NFC East is awful -- to give the Eagles a touchdown.

Last week, Philadelphia produced just three points in a loss to the Cowboys. Naturally, Kelly's offensive style and his entire approach to coaching is a complete and total failure. He might as well give up and send word to Gil Brandt that he's interested in that USC job after all.

Remember when Chip Kelly's offense was going to revolutionize football? Yeah, that was a fun topic.

I'm calling it. Chip Kelly's offense may not revolutionize the NFL.

Chip Kelly's offense that was going to revolutionize football has scored 3 points in the last 6 quarters. Fact

No scheme or style of play can succeed with Nick Foles or Matt Barkley or Michael Vick at quarterback. FACT.

The aging Vick left early after aggravating his hamstring injury. Barkley's play can best be described as Clausen-esque. And Foles was inactive with a concussion, not that he would have helped give his recent play. Compounding the problem? DeSean Jackson finding ways to kill drives.

Kelly's decision-making was fair game. He called for a punt on fourth-and-4 early in the fourth quarter, trailing 15-0. After scoring the touchdown, the Eagles went for the extra point instead of trying for two points. The last Eagles drive of the first half made me wonder if Kelly was using an old Andy Reid play sheet.

There's only so much you can do with a hobbled Michael Vick, Matt Barkley and a defense that no scheme can compensate for.

He called a timeout with first-and-goal at the 2-yard line with 1:14 left, after Barkley had completed three straight throws. He called for another pass right after that. According to Football Outsiders, opposing offenses were converting 82 percent of the power opportunities (defined as getting first down or a touchdown on third and fourth downs with two yards or less to go OR scoring on first and second downs from the 2-yard line or closer) against the Giants defense. Only two teams were worse than the Giants in those situations. The Eagles called for a passing play; Barkley was sacked and fumbled the ball on first down.

Kelly's greatest strength as a coach goes beyond his offensive designs or crushing opponents with a breakneck pace. What sets him apart has always been how he tailors things to the strength of the players. But there's only so much you can do with a hobbled Michael Vick, Matt Barkley and a defense that no scheme can compensate for.

Let's at least give Kelly another offseason of personnel moves and some time to learn the finer points of NFL clock management before sending him back to college after eight games.

It hurts to lose an icon like Deacon Jones or Lou Reed. As entertainers and artists, they both gave us something to enjoy, a way to connect with ourselves and others. It's worth taking a moment to remember that before you get lost in the sludge of sideline arguments or good/bad coaching debates.

My top five Lou Reed songs, solo and from the Velvet Underground (subject to change from moment to moment):

• Is the problem Trent Richardson or the Colts' offense?