Share All sharing options for: 10 more of the greatest World Series programs

Since the modern World Series began in 1903, it's generated more than 150 program covers. Picking just 10 of the greatest, as I did last week, was a difficult task that made for many sleepless nights. A number of great covers had to be excluded, and I was consumed with guilt. The solution soon became obvious: plan on a follow-up with 10 more great covers.

These then are the all-time runners-up. You might believe that some of them deserved to be included in the initial offering. You might be right. This isn't science. 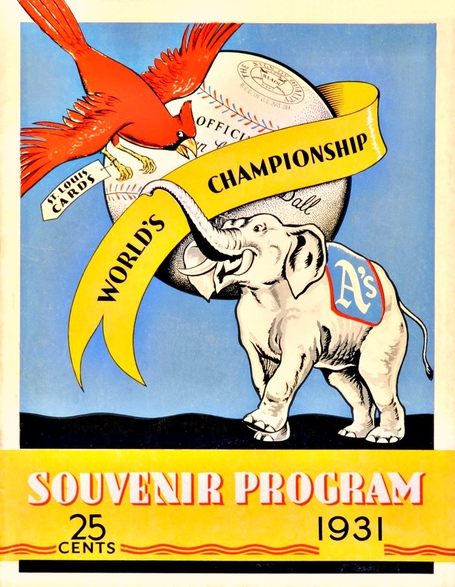 The A's elephant, a mascot who has come and gone throughout their history, is happily tromping along, unaware of the danger that lurks above. Suddenly, it's a battle to the death! (And, just so the elephant knows this isn't just any cardinal, this one has a name tag dangling from his leg.) 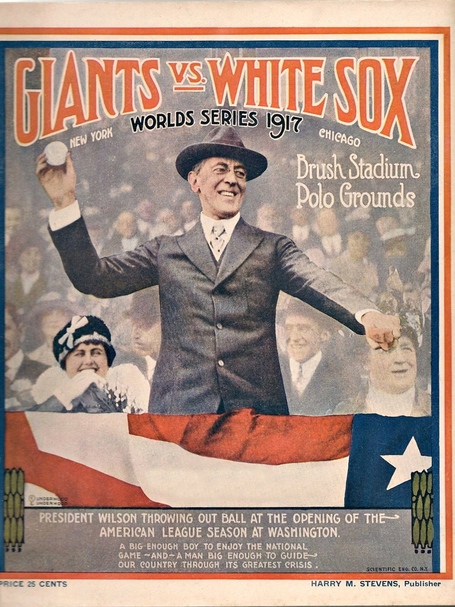 This lively appearance by President Woodrow Wilson is not the first time a non-uniformed person graced the cover of a World Series program. Prior to 1917, it was not uncommon to put a team's owner out front (I'm looking at you, John T. Brush). One wonders if that was done by fiat from the owner himself, or by some underling currying favor with the boss. 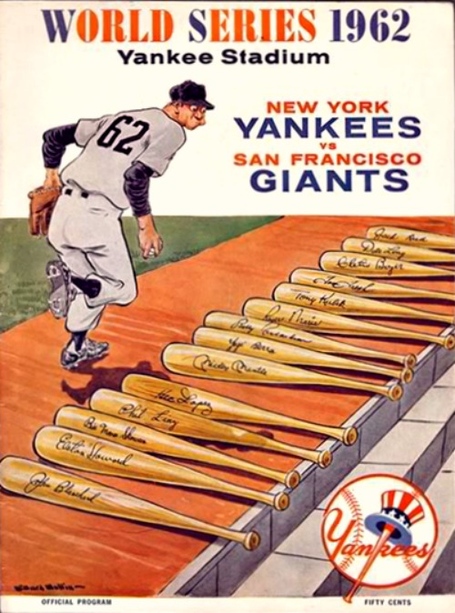 Elite baseball cartoonist Willard Mullin landed two covers in our top 10 last week, and scores again here with a pitcher worrying over the Yankees lineup (and the next spring, The Sporting News would feature a slightly revised version of this image on the annual Official Baseball Guide). 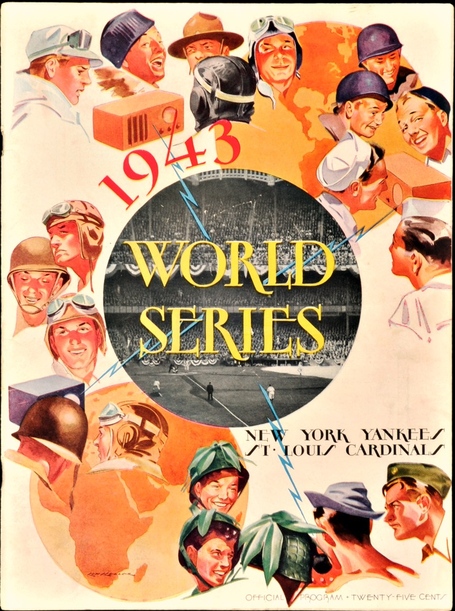 The World Series once united the country in ways that it doesn't now. Which isn't to say baseball is in bad shape, just that its great popularity now manifests itself in a different way. Artist Lon Keller -- the man who designed both the Yankees' and Mets' long-serving logos -- nicely presents the unifying nature of the fall classic during World War II. 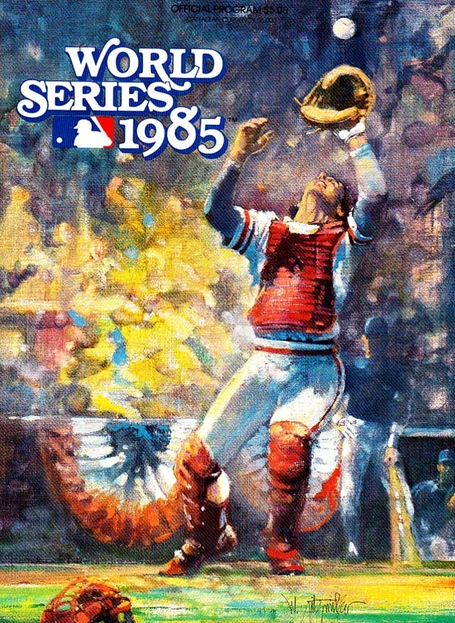 Face it: you blew it. I blew it, too. Hell, we all blew it. No, wait -- one person didn't blow it; the person who bought the original painting of this striking cover at auction two years ago for just $879.00. It's by Walt Spitzmiller and represents the high-water mark of World Series program covers from the dark age of 1974 to 1997. 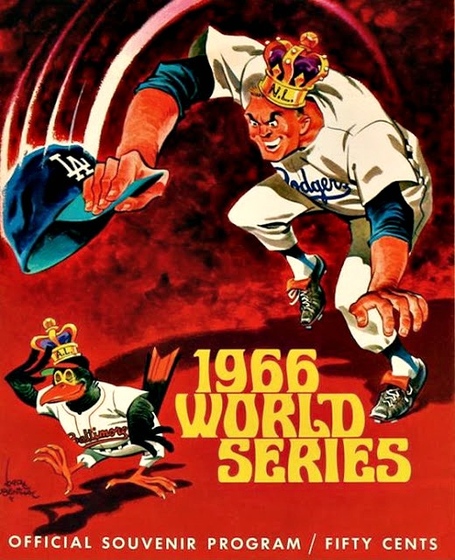 From the easel of Karl Hubenthal, the man who gave us our number-one pick last week. Some of the cleverest sports programs of all time feature the team's mascots or visual representations tangling in comic fashion. Often, they become ironic in hindsight, which is the case here as the defending champion Dodgers managed to score only two runs while getting swept by the upstart Orioles. 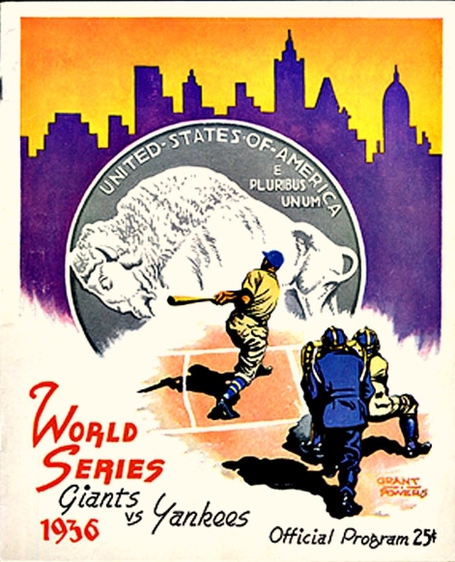 There have been 14 World Series played exclusively by New York teams, but the 1936 installment is the only one with a program cover that gives a visual cue to the Subway Series sobriquet. Painted by Grant Powers, it features the reverse side of a Buffalo nickel which was emblematic of subway travel because, until 1948, that was the cost of a ride. In addition to being an official artist at the Bikini Atoll A-bomb tests, Powers also did a nice job for the Yankees on the 1938 cover. The ages really lost a great cover when the Pirates were aced out of the National League pennant by the Chicago Cubs that year, though. In fact, might this have been the greatest cover of them all? 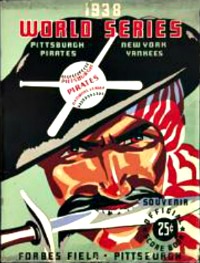 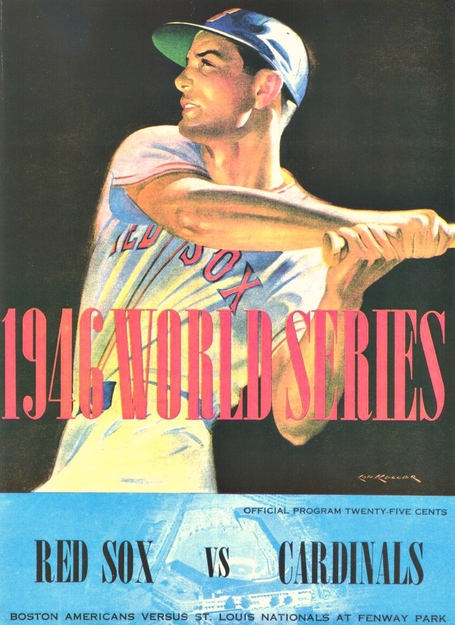 This is like some sort of optical illusion test. You see a guy in a Red Sox uniform and your mind immediately leaps to Ted Williams. Only then the rest of your brain realizes this player is swinging from the right side and that, upon further review, he really doesn't have Teddy Ballgame's face. It's another great one from Lon Keller and the original artwork recently showed up on Antiques Roadshow. 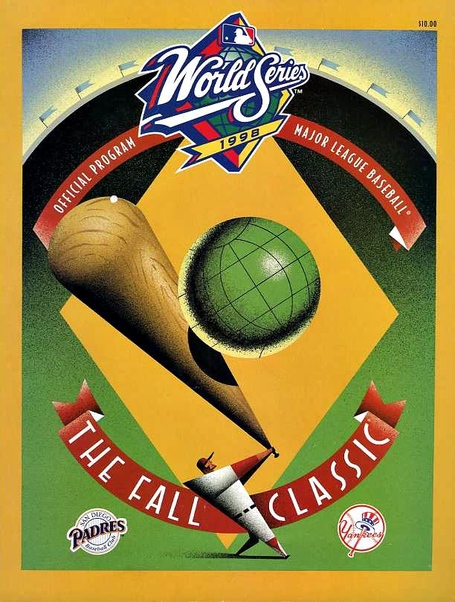 After 25 years of covers dominated by still-life photography and art that looked like it belonged on a generic book cover given away by Burger King at back-to-school time, MLB dropped this interesting concoction on an unsuspecting public. Suddenly, style was back! 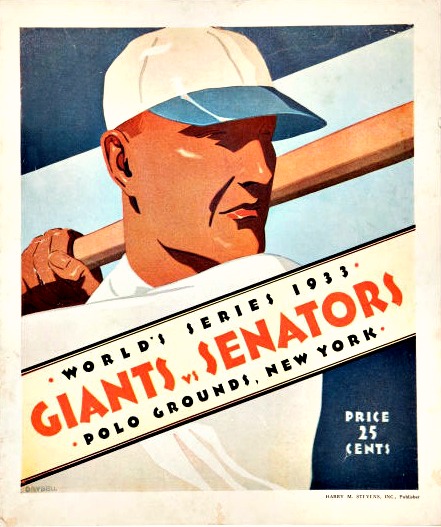 If major league baseball had been looking for a corporate logo in the ‘30s, this iconic image would have been a good place to start. It's simple and timeless. In fact, look how easily it slides into the now ... 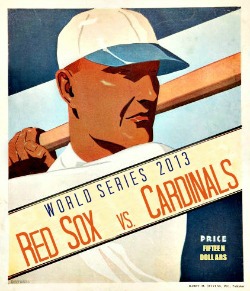 While modern covers cry out for the such beautiful artwork of the past, they did take a step in the right direction 2013. For the first time in four decades, there are separate covers for the opposing teams! We can only hope that that development is a harbinger of a new golden age of World Series program covers.