How the Philadelphia 76ers forward is able to slither his body into spaces around the basket when other teams aren't watching. 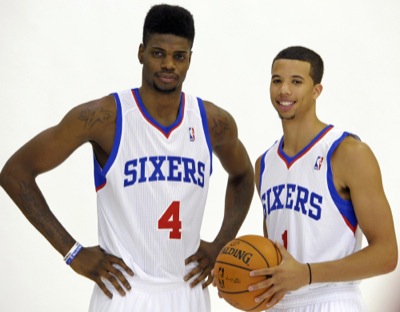 Thaddeus Young is arguably the best offensive player left on the stripped-down Philadelphia 76ers' roster. All that despite the 76ers rarely calling plays for him.

To the naked eye, Young scores his points by accident, manufacturing them by sneaking into gaps. Once the game is done, Young will have 16 points and eight rebounds, and you won't remember any of them.

You could say that makes Young a "garbage man," a pejorative NBA cliche. Road broadcasters will call his buckets by shouting GREAT PASS, crediting the man that found Young rather than Young's own ability to slither between defenders on the baseline to make himself available.

But it happens so often that it can't be an accident. There's a science to Young's scoring ability. Young has a gift for turning "garbage" into "gold," as Philadelphia 76ers play-by-play man Marc Zumoff is fond of saying.

It's a gift that he has taken to another level since signing a five-year, $43 million contract extension in 2010. Since then, he's ditched the three-pointer, stopped fancying himself as an isolation player and focused on what he does best. Over a fifth of his ended possessions came on plays classified as basket cuts, per MySynergySports.com, and he scored or drew a foul on 64 percent of those plays. In 2009-10, less than 10 percent of his possessions ended via a basket cut. Meanwhile, the percentage of his plays that ended in an isolation has been chopped in half since that time.

That means Young scores a lot of buckets like these, where he seemingly comes out of nowhere and deposits the ball in the hoop with a vast array of floaters and push shots. His touch, and his timing, is impeccable. Before you even know it, he's caught the ball and gotten it up at the rim. (Song is "Rope," by Foo Fighters).

And yes, there is a science to it. It starts with Young's ability to keep himself moving despite generally staying within a 12-foot radius of the hoop. 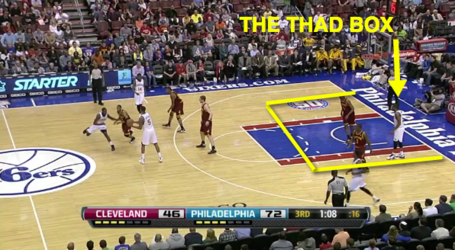 Young occasionally strays from that box, but he does his best work from there. As the play is going on elsewhere, Young keeps moving around near the basket, figuring out the right passing lane to give his point guard and hiding himself from his primary defender. It requires active feet, quick thinking and the ability to be ready to catch and go as soon as the ball is passed. Look at how much Young moves around in such a contained space on this play, which eventually results in a foul.

(Notice, too, how he tap-dances out of the paint to avoid the three-second call).

That kinetic energy is common. Teams now know Young is not a threat from the perimeter, so it'd be pointless for him to stand out there too often. He must make himself a threat without using much space of the court. The only way to do that is to keep moving and stay ready.

It also helps that Young can adjust his path depending on the play. He can sense when it's time to abandon a plan and make himself available to catch and finish. Nobody on the court reacts quicker because he pays attention to the play at hand and his other responsibilities at the same time. Notice how he's watching the ball while setting a screen for Evan Turner on this play. 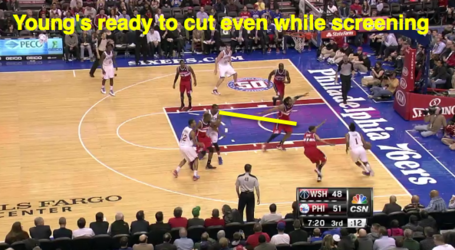 That enables him to move into open space before the Wizards can try to stop him.

And once he cuts, he has velcro hands that gobble up any errant pass and a quick release that is virtually unblockable. Notice how off-target this pass is. Nevertheless, Young's hands gobble up the delivery and flip a runner into the hoop before anyone else can react. 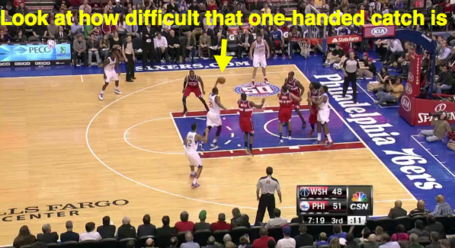 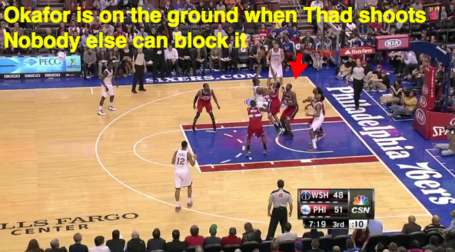 Just like that, a play that should not have ended in an assisted field goal does.

That quick release is critical to Young's success. It's hard to power vertically in such a contained space, so Young must rely on floor-bound layups and floaters to put the ball in the basket. He is capable of making push shots before his defender can react, like so. 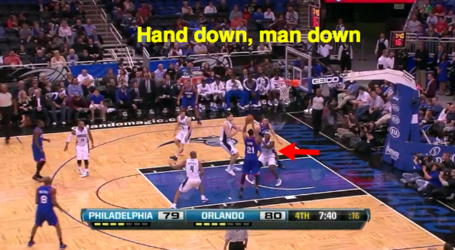 Or, he can hit off-balanced, wrong-footed layups, like he does here against David Lee. 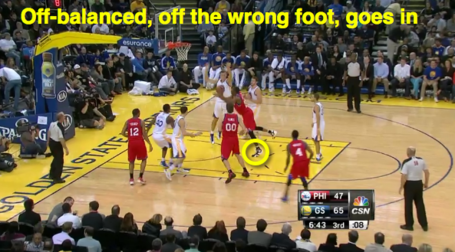 Either way, it's hard to predict Young's movements. He may not be a traditional "stretch 4" like Ryan Anderson or Ersan Ilyasova because he can't shoot from the perimeter, but he's more resourceful and much more difficult to take away because his strength is adapting to his surroundings.

Combine all that with his elite pick and roll defense and ability to run the floor in transition, and you have a really valuable player that can fit in with any five-man combination. As the 76ers continue to tear down their roster, you can bet that you'll hear Young's name in trade talks. 76ers GM Sam Hinkie will surely ask for a lot in return, but considering Young's versatility, adaptability, age (he's only 25) and fair contract (he has three years and just over $28 million left on his deal, per ShamSports.com), he's worth as much as any non-star on the market.

He belongs on a good team, and any good team would love to have him.