How Channing Frye's shooting opens up the Suns' offense

The departure of Steve Nash was the biggest reason the 2012-13 Suns tumbled to the bottom of the league, but don't underestimate the impact of losing Channing Frye's shooting.

Share All sharing options for: How Channing Frye's shooting opens up the Suns' offense

The 2011-12 Phoenix Suns were a decent team, albeit one that started to emerge too late in the season. They were a top-10 offense during the season and fourth from March 1 on. If the season was 82 games instead of 66, they would have made the playoffs, but their resurgence started too late and they finished three games behind the Jazz.

Two major components of that 2011-12 club were not on the team in 2012-13. The obvious one was Steve Nash, who was traded to the Lakers. He declined in 2012-13, but in 2011-12, he was still his magnificent self. Replacing him with Goran Dragic was a major downgrade, even if Nash fell off and Dragic played decently.

The less obvious absence, though, was Channing Frye. The sweet-shooting big man received devastating news when a preseason physical revealed an enlarged heart. He sat out the entire season and it wasn't clear whether he could play basketball again. Now, he's cleared to play, and if he can pick up where he left off, he'll help the Suns more than many think. (Assuming the Suns indeed are trying to win instead of tanking for more ping-pong balls, of course.)

The key to the Suns' brilliant offensive performance in 2011-12 was the synergy between Nash, Frye and Marcin Gortat. Phoenix would begin many sets with high pick-and-rolls involving all three, with Nash choosing one big to initiate the play. As Gortat rolled down the lane, Frye would pop to the top of the key or the wing, putting the defense in a tough position. Do you prioritize stopping Gortat's drive to the rim, or pay extra attention to the dangerous Frye from downtown? These are difficult split-second decisions, and lots of layups and threes resulted.

There were also variations to the double-screen sets. Sometimes, Gortat or Robin Lopez, the other center that year, would turn around and screen for Frye, like so.

And even when Nash and Gortat alone ran a pick-and-roll, the Suns made sure to have Frye spotting up on the wing to pull teams' help defenders away from the hoop. Two examples from plays that Gortat finished with a layup: 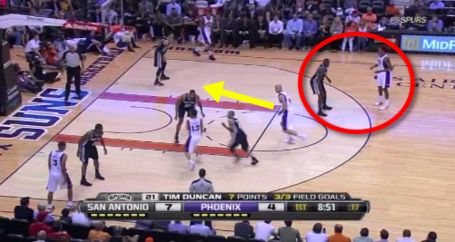 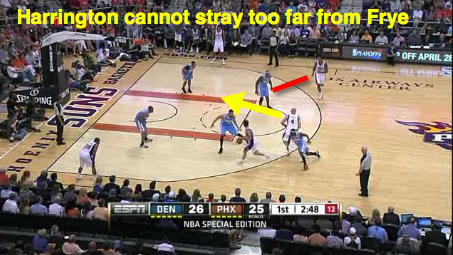 The brilliance of Nash helped make these plays happen, but Frye's presence is also important. The threat of Frye's shooting gave Gortat more open lanes to roll, catch and finish at the rim. It's no accident that Gortat had the best season of his career feasting on these types of plays. In 2011-12, Gortat averaged 4.8 plays finished per game as the roll man on a pick-and-roll, according to MySynergySports.com. That number was chopped in half last year, even though Gortat only averaged 1.2 fewer minutes per game. The absence of Nash and Gortat's own vocal frustrations with his role have a lot to do with that, but so did the absence of Frye.

By contrast, consider how the floor is spaced here with Luis Scola, a mid-range shooter who lacks Frye's ability to stretch the floor, in Frye's place. 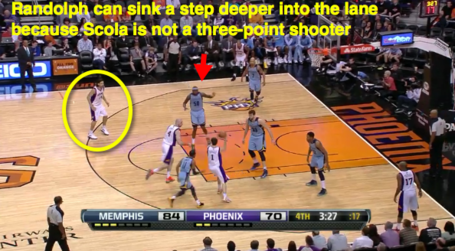 There's no space for Gortat to roll to the rim because Zach Randolph has sunk a step further off Scola than Al Harrington can off Frye in the above screenshot. Scola is open, sure, but because he's inside the three-point line, Randolph is able to recover and properly contest his 20-foot jump shot. Not only do the Suns get a 20-foot jumper rather than a layup or three because of Scola's inability to space the floor, but it's a decently contested look too, even though Randolph isn't exactly the quickest defender in the world. 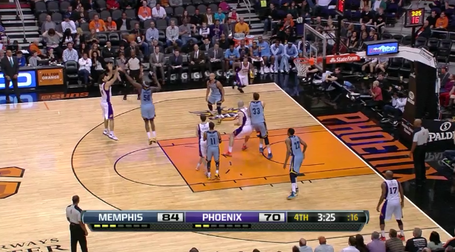 This was common all season. Whenever Dragic and Gortat would try to run the pick-and-roll, Scola's man would sink into the lane to provide extra help against Gortat. If that left Scola open, so be it. A 18-foot two-point jumper is less damaging to a defense than an open three-pointer, and the help defender had less distance to travel to contest it. Serge Ibaka is an athletic freak, but it's still telling that he's able to sink so far into the paint and still recover to alter Scola's shot on this play.

None of this is Scola's fault. He just wasn't suited to the floor-spacing role that Frye occupied. Frye's heart ailment happened so close to the season that the Suns weren't able to make the necessary schematic adjustments. They too often had to plug Scola into Frye's role, and the difference of a few feet mattered.

Visit Bright Side of the Sun for even more Suns coverage.

Again, this isn't to say that Frye's absence alone explains the Suns' massive drop-off. Replacing Nash with Dragic had a much bigger impact, as did other ill-fated summer transactions and the general malaise that eventually swept the team by midseason.

But losing Frye's shooting was definitely a factor as well. If he can play at the same level he showed before his enlarged heart was discovered, Dragic, Eric Bledsoe and Gortat will improve.

• Pacers paying the cost to not quite be the boss