For years, the NFL has ignored the easiest way to eliminate head injuries.

Share All sharing options for: Time to fix the NFL's concussion issue

"You gotta tear people's ACLs...mess up people's knees. You can't him them high anymore. You've just got to go low." - Sports Illustrated

These are the words of Brandon Meriweather, Washington Redskins safety who served a one-game suspension last Sunday for a pair of head-hunting hits on Chicago Bears' receivers Alshon Jeffery and Brandon Marshall. His original suspension was two games, but he successful appealed. Nice message.

Meriweather can be a punk, a sometimes cheap-shot artist who aims high with bad intentions, but his words ring true with an eerie foreshadowing. The man who has lost over $200,000 in fines for these types of hits vows to discontinue this practice, giving into the NFL's mandate on head safety.

Incredibly, he has a point. Many believe that the rule changes have gone too far. The intended effect of saving these high-performance athletes from concussions is now putting them at risk to other serious injuries, most notably torn knee ligaments.

The fix to all these head injuries are not in the rules as the league thinks; it is in the equipment.

In the 1980's and 90's, Buffalo Bills safety Mark Kelso played with an extra layer of padding on top of his helmet, covered by a hard shell after sustaining two serious concussions early in his career. The invention is known as the ProCap.

San Francisco 49ers offensive lineman Steve Wallace also wore one in the mid-90's, extending his career and saving him from more head injuries, after having a trio of concussions during the 1994 season. Somehow, in an age when everybody rightfully screams for safety, nobody remembers these helmets. 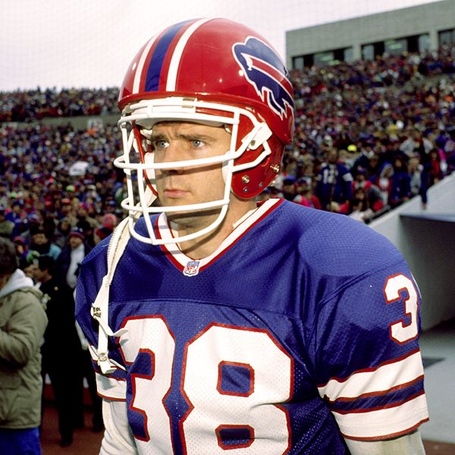 Here is a quote from Kelso in Gregg Easterbrook's piece on ESPN.com back in 2010:

"With padding, I played an additional five season, almost 100 more games, and sustained only one concussion, which wasn't a helmet-to-helmet hit - someone kneed my head. Absolutely the padding made it safer for me and safer for the players I was hitting. You can't use an outer-padded helmet as a weapon.

"Pound a padded helmet against your own knee; it doesn't hurt. Do that with a standard polycarbonate helmet and you'll howl in pain. If both players were wearing this in a helmet-to-helmet hit, it wouldn't be anywhere near as bad."

Would these helmets work for everybody? More testing would likely be needed, but what is the hold up? If it worked for two players at high-impact positions with a history of concussions, it will probably work for most.

The athletes are only getting bigger and faster, making it increasingly difficult to execute a form tackle. Without change in the equipment protecting our most important body part, someone will die on the field. All the rules in the world will not save the man who finally gets hit too hard, but someone too big, and too fast, at the wrong angle.

It is time the NFL stops trying to legislate all of the violence out of the game. It is a violent sport by nature. The faster that fact is accepted, the faster a real answer can be found.

Then again, the answer might be a goofy helmet that we saw 20 years ago on a few players who weren't afraid to stay out in the name of safety.

• London's lukewarm reception to the NFL