The Truth about C.B. Bucknor

Share All sharing options for: The Truth about C.B. Bucknor

The groans began even before the game began. Even before the A's and Tigers faced off Saturday night in Oakland, the carpers began their carping about home-plate umpire C.B. Bucknor. Here, I'll show y-- Actually, no I won't. I searched a - Twitter for mentions of Bucknor, but I literally spent 20 minutes scrolling backward and hadn't even reached the fourth inning.

So I gave up. Trust me. The carpers were carping. But things really picked up after Seth Smith struck out looking in the bottom of the third inning. He got ahead 3-and-0, then took a strike, swung and missed, and took strike three. Here's what that supposedly looked like from Bucknor's perspective, and pay closest attention to the sixth (and last) pitch: 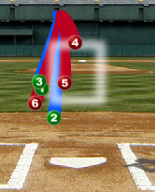 Let's assume that everything's well-calibrated, and that a three-dimensional strike zone is accurately represented in two dimensions. So how can the sixth pitch be judged a strike, and the first and third pitches judged balls? You might well understand why Smith and his supporters would be frustrated by that call. Or just your regular baseball fans. You can't blame them for being frustrated, either.

Just a few moments later, it was the Tigers' turn, as Sonny Gray struck out Austin Jackson with a pitch that almost certainly didn't come within two or three inches of the strike zone:

Again, we're looking at the sixth pitch (and last) pitch in the sequence. The sixth pitch to Smith was both low and outside; this one was just outside. Hell, who knows. Maybe Bucknor, whether consciously or subconsciously, knew he'd missed the pitch to Smith and made up for it with this one. Smith should have walked, with two outs and nobody aboard. Jackson, leading off, should have continued batting, with a full count.

Two batters in a row with ill-called punch-outs. It doesn't help that Bucknor's strikeout call draws comparisons to Frank Drebins' in the Naked Gun movie. But Drebins or no Drebins, Twitter was going to explode, and so for a stretch of Saturday night, BUCKNOR was trending.

Bucknor's strike zone is terrible, but at least it's inconsistent

Hey, bonus points for referencing the opening monologue in Annie Hall (even if the message is different). We'll get back that in a moment. Here's another tweet from someone else I follow:

Bucknor's K zone is huge. A's have looked at called 3rd in 5 of 6 Ks so far. If they don't adjust, they're dead. Gotta adjust to this

In fairness to Scott, in his very next tweet he said there had been only a couple of third strikes out of the zone. But by the third inning, the consensus -- as seen on Twitter, anyway -- was abundantly clear: C.B. Bucknor is a terrible umpire and he's having a terrible game and how in the hell did he draw this assignment anyway.

Here, via the incredible Brooks Baseball, are all the pitches Bucknor called with left-handed hitters at the plate: 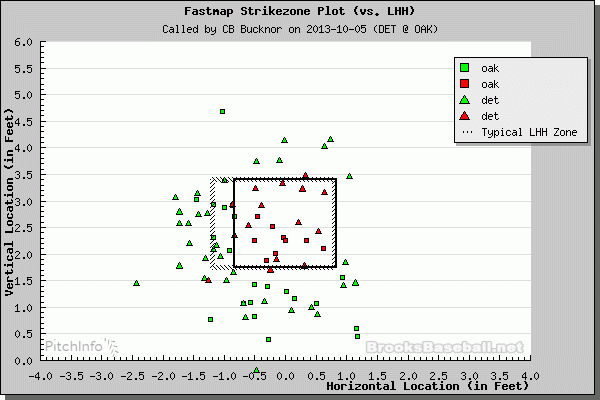 Do you see the third strike to Seth Smith? It's pretty noticeable. It's that red triangle that's low and outside. Do you see many other lousy calls? Do you see any other lousy calls? Because I don't. In fact, this is even more impressive than it looks. That shaded box? That's the typical strike zone with a left-handed hitter batting; for some reason, pitchers often get some free strikes that are actually outside the real zone. But not with Bucknor, Saturday night. There's literally just one other pitch that he seems to have missed, calling a ball on a pitch that seems to have clipped the outside edge of the zone. So two pitches out of ... well, a lot of pitches, including a few borderliners.

That's with the left-handed hitters. What about the righty hitters like Austin Jackson? 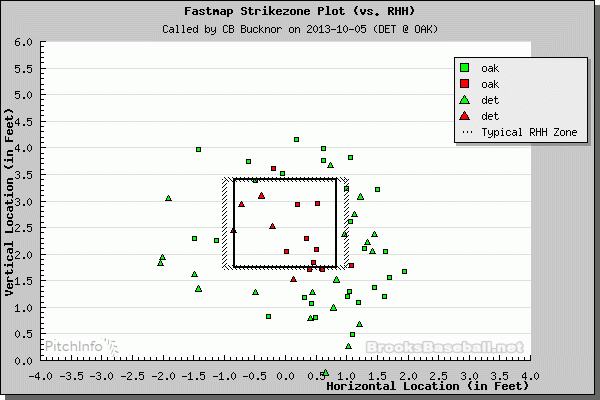 Okay, so that one's not quite as good.

But it's pretty damned good! There's that third strike that got Jackson, but even that is on the edge of the typical strike zone. There's a strike that's slightly low, and a strike that's slightly low, and maybe a couple of balls that should have been strikes. But you want consistency? I think you'll have a tough time finding a game this month that's called as consistently as this C.B. Bucknor called this one. A robot could do better, maybe. But not many men could.

Bucknor's been on the receiving end of a lot of abuse for some years now. In at least one poll of major-league players, he got more votes as worst umpire than anybody else. His judgment has, at times, seemed exceptionally poor. But none of those things necessarily mean that he's not good with the balls and the strikes. In fact, if you believe what Major League Baseball says about postseason assignments being merit-based, it's at least within the realm of possibility that he's umpiring Division Series games because he's good with the balls and the strikes.

You know about the Halo Effect, right? Where if someone's good at something -- or just flat good-looking -- we assume they're good at everything else? I'm guessing there's a Reverse Halo Effect, too. We see C.B. Bucknor embarrassing himself all over the field, and so we just assume he's terrible at the most important part of the job.

But it's not necessarily so. The tweets ripping Bucknor for nine innings and beyond were legion, hundreds piled atop hundreds of them. But if you're willing to wade through hundreds upon hundreds of tweets, you'll almost always find something worth knowing ...

For one night, anyway, C.B. Bucknor did just about as well as anyone could have done. Just as the pitchers 60 feet away were doing the same.