The Quarterback Internet Hate Index: How much do we hate QBs, and how wrong are we?

NFL quarterbacks, if you ask the Internet, are for hating. In this dreadfully scientific study, we look at how much we hate these QBs and how dumb we are.

Share All sharing options for: The Quarterback Internet Hate Index: How much do we hate QBs, and how wrong are we?

There's a very small roster of starting NFL quarterbacks who aren't actively hated by vast swaths of Football Internet. This roster expands and contracts every passing week, heaving inward and outward within the iron lung of immediate judgment, psycho-pop, and tastemaking dummies. Over the last year or so, I've considered the following quarterbacks to be in this club:

Matt Schaub is perhaps the grand champion of the "not especially objectionable" set. For seven years he's quarterbacked the Texans, a team that nobody outside of their division really hates. He hasn't been especially mistake-prone or inconsistent, and year after year, he's performed well statistically.

This may change for Schaub. Sunday night, the Texans lost their third straight and Schaub suffered an awful game, throwing for 173 yards, no touchdowns, and three interceptions. This morning I pored through every Twitter search result for "schaub sucks." You're welcome to join me, especially if you enjoy inefficient web search techniques and/or Will Oldham:

I decided that clicking through the 1,400-plus results for "schaub sucks" was far easier on a mouse than a trackpad, for what it's worth. This is what I found: 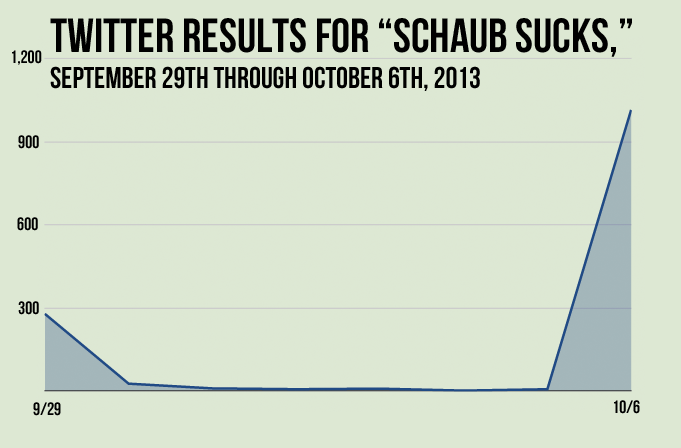 Schaub certainly isn't in Jay Cutler territory yet, but this is a rather dramatic turn.

Our perceptions of NFL quarterbacks sort of fascinates me, so I decided to create a metric known as the Quarterback Internet Hate Index. It's rather elementary and inexact, and statisticians might shake their heads upon seeing how I've created it, but I think it's at least reasonably indicative of two things:

1. What we think of these quarterbacks, and

First, I rounded up all quarterbacks who have made at least one NFL start this season and have started more than three career games. Then, for each quarterback, I Googled:

And then I clicked through the results until Google stopped counting duplicates to find out how many folks, in essence, typed "Cutler sucks" on the Internet. (In a couple instances I had to adjust the search terms so that Peyton's results wouldn't overlap Eli's, Alex Smith's results wouldn't blend with Geno Smith's, et cetera.)

Then I looked up each QB's career "Approximate Value" -- a stat generated by Pro-Football-Reference that attempts to assess a player's total value -- and then divided that by the quarterback's number of career starts. (These stats are through 2012, since AV figures for 2013 are not yet available.)

Finally, I graphed the quarterbacks' numbers in both those categories in relation to the mean, and I found this: 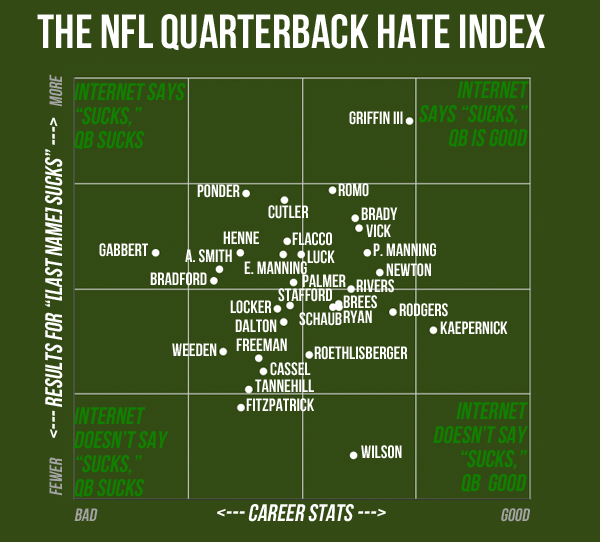 INTERNET COOLS IT ON SAYING THEY SUCK, AND RIGHTLY SO, BECAUSE THEY ARE GOOD
Russell Wilson
Colin Kaepernick
Aaron Rodgers

THEY "SUCK" (AGAIN, SUCH A CRUDE THING TO SAY), BUT THE INTERNET KIND OF GIVES THEM A PASS, RELATIVELY SPEAKING OF COURSE
Ryan Fitzpatrick
Brandon Weeden
Josh Freeman
Ryan Tannehill
Matt Cassel

THEY ARE ROBERT GRIFFIN III, WHO HAS BEEN GOOD AND WHO THE INTERNET LOATHES WITH THE HEAT OF A BILLION SUNS
Robert Griffin III

RGIII's position on this chart is quite lonely, and I think we can credit a lot of that to the simple fact that he's talked about a whole lot. He has tons of fans and tons of ... people who say he sucks.

The Quarterback Hate Index places Schaub, Carson Palmer and Matt Stafford as the standard-bearers of the norm. We in Football Internet are an especially mean and crabby sort, and if he doesn't watch out, Schaub may veer outside the tranquil eye of the Internet hate-icane. Since, you know, he even cares.