Kobe Bryant, injury recovery and the myth-building of a legend

Kobe is a master of building his myth, because he's the realest NBA star. Plus, The Hook considers the Sarver system of front office management and Marreese Speights gets a surprise.

Share All sharing options for: Kobe Bryant, injury recovery and the myth-building of a legend

Kobe Bryant is a master of many things, primarily basketball things. The five-time champion, two-time gold medalist, one-time MVP and 15-time All-Star has done it all, basically, in this sport. Yet he remains unsatisfied. For all the snark directed at him (a hefty dose of it supplied by yours truly) he's truly a magical being in NBA lore. Let us not get so wrapped up in that which he now lacks in his mid-30s that we miss what we offers better than all others.

And right now, as he recovers from surgery to repair his Achilles tendon, he's offering some fantastic myth-building. In August, Kobe visited China and sat down for a CCTV program Let Them Talk. (Think VH1's Storytellers, but for a basketball star and with incessant pop-ups.) It aired on Saturday, and the Los Angeles Daily News posted about it.

"As I sit here with you now, telling you I'm going to come back 100 percent ... I don't know for sure. You know, I have moments and I have days where I doubt myself. But to me, that's the exciting part of the challenge. That's when I realize this is a great opportunity to come out and show everybody this is how you bounce back. This is how you respond to a challenge. And the people who say, 'You'll never do it, you'll never make it,' this is how I look at that. The people who say, 'You will never come back from this injury' ... to me, that means that if they had this injury, if they had this injury, they would quit. That's what it means to me. Because if they sit there and look at me and say I can't do it, that means that if this happened to you, you wouldn't do it. So I have to show them just as much as I show the people who support me that this can be done and I can come back from this. By me coming back from this shows the people who doubt me, hopefully makes them reconsider what's possible. And that's the important story about the scar. The scar is a good story anyway."

I mean, Wieden + Kennedy couldn't write that. No other player in the league could sell that and make it believable. Somehow Kobe, the realest pitchman alive, not only sells it, but makes it feel like a personal manifesto. In his image, "Just Do It" becomes an eloquent monologue on struggle, redemption and the light that springs from all shadows.

And in this way, the devastating injury Kobe suffered late last season has opened a whole new window into what makes him tick. Later in the monologue, he namedrops Michael Jackson, Leonardo da Vinci and Bruce Lee as inspirations and says that his Black Mamba persona is not intended to represent hyper-competitive aggression, but a consuming thirst for greatness. And Kobe's incredible success hasn't quenched that thirst, as he makes clear.

This sort of baring exposition wouldn't be possible and/or believable without the injury and the obvious odds stacked against Kobe. Really, this is the first time we can say the odds have truly been stacked against him. All other times we considered him an underdog, we were really just misjudging him. A torn Achilles tendon at age 35 with about 54,000 NBA minutes on the odometer -- he's an underdog, really. And he fights the odds because he cannot stop himself from fighting the odds.

We all wish Kobe were healthy so that we could see the Mamba And Pau Revenge Tour in full throttle, but we're learning more about No. 24 in his absence.

(Another interesting thought about this whole myth-building is how adidas's The Return campaign for Derrick Rose was an abject failure in sincerity, despite Rose being among the least adorned and most believably earnest stars in the league. There's little question that the actual struggle of the return itself played into that -- Rose's prolonged absence and the Bulls' apparent efforts to use public pressure to get him back on the court overwhelmed the actual narrative of Rose's struggle.)

"Thank You @boogiecousins for the beautiful flowers and the encouraging message. My Love to all the Kings"-Sign Lady pic.twitter.com/TXaiXZVLei

"Sign Lady" is Barbara Rust, a diehard Kings fan who, for as long as anyone can remember, has graced section 118 of the current Sleep Train Arena (née ARCO) with bold-lettered, brightly decorated, incessantly positive signs. Hence the name. She's the closest thing Sacramento has to a celebrity fan. (With the exception of Colin Hanks, of course.) Last week, her husband Niko announced on Twitter that Sign Lady has been diagnosed with cancer. That led to an outpouring of support for the family, including from many former and current Kings players and coaches.

And apparently led DeMarcus Cousins to send Sign Lady flowers. Those who knows him and follow him most closely have always said he has a big heart. Yup.

A PEEK INSIDE THE SUNS

Dave King at Bright Side of the Sun has a stellar look inside of Phoenix Suns front office after an extensive interview with team president Lon Babby. Babby tells King that while he leads the front office, new GM Ryan McDonough makes all personnel decisions. Babby is the guy who approves it and helps facilitate the moves through agents and other GMs. The specific example given is the Eric Bledsoe deal.

New Assistant GM Trevor Buckstein - who has been with the Suns for years but was promoted this summer - found a way under the cap to get J.J. Redick to the Clippers without them using their [mid-level exception], while Babby called Redick's agent and McDonough called Doc Rivers.

"But that trade doesn't get done if Ryan didn't think Eric [Bledsoe] was the right player," he said. "I wasn't making those judgments and I shouldn't be. He's very definitive, he's very strong in what he wants to do."

It's not really a surprising situation, but it's certainly interesting to see how that sausage was made. (I'd really like to see Milwaukee's process on this one, actually.) But there's a gnarly undercurrent to the Suns system.

Babby spent a few minutes harkening back on when he first joined the Suns three years ago. Robert Sarver wanted a new model - again, one that's been copied in several teams since - where there was a lawyer and executive leader over the basketball minds to keep the bottom line intact while also contending.

Visit Bright Side of the Sun for even more Suns coverage.

The thing is that good GMs don't need a babysitter with a J.D. or MBA to keep costs in line. Because the NBA has a salary cap, managing it well is part of being a good GM. In fact, it's right behind talent evaluation on a list of the most important traits of a GM. While Golden State has had success with the Sarver model, a big heap of the credit goes to the superlative talent evaluators in that front office, who plucked Stephen Curry, Klay Thompson and Harrison Barnes out of the draft lower than each should have gone. And Babby's own experience confirms that talent evaluation is more important than the executive role: his last GM, Lance Blanks, made some horrible basketball decisions, ones that Babby (in part) blames for the Suns' slow reformation.

The Sarver model borrows from modern corporate theory, which posits that all talent must be managed. GMs are considered talent. But it's painfully obvious that, at least in the Suns' case, whoever is in the GM's chair is vastly more important than Babby. If McDonough does work out, it's going to be a problem that he's still reporting to a guy who, in the important first trade of the offseason, functioned only to call a player's agent and sign off on the eventual deal. The NBA executive ranks are chock full of egos, for better or worse. If Babby's role is truly just that of managing McDonough and his staff and reporting back to Sarver, it seems wholly unnecessary.

That said, it may work for some teams and situations, such as when a GM needs a buffer between himself and a meddling owner. We'll see how it shakes out long-term in Phoenix.

Be sure to check out Free Spirits, ESPN's latest documentary. It airs Tuesday at 8 p.m. Eastern on ESPN proper. It tells the story of the Spirits of St. Louis, the most bizarre ABA team, which is saying something. I, for one, can't wait to see what director Daniel H. Forer did with what is some amazing source material. (You've read Loose Balls and FreeDarko Presents: The Undisputed Guide to Pro Basketball History, right?)

In which Marreese Speights freaks out when he finds out Stephen Curry made a clone of himself and named it Seth. 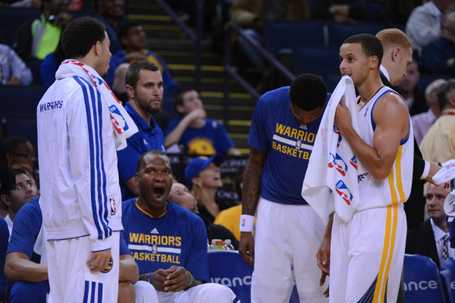