4 players who probably shoot too many three-pointers

Of the 25 guys who shot the most threes in the league last year, only four shot below league average from long-range. This is why they should probably shoot less. Plus: Chris Mullin gives us an All-Star idea and the Philippines are wonderful.

Share All sharing options for: 4 players who probably shoot too many three-pointers

The league as a whole hit 35.9 percent of the three-pointers taken last season. You would expect that the players who shoot lots of threes tend to do so at a rate greater than 35.9 percent. It makes sense: the best three-point shooters in the league should take a bigger share of the shots available.

And these are important considerations, as threes are totally vital to a great offense. Consider that shooting 100 threes at 35.9 percent gives you about 108 points. You'd need to shoot 54 percent on two-pointers to match that. The league's two-point percentage last year was ... 48 percent.

So again, threes are important because they are more efficient than twos on average. If you look at the top 25 players in terms of three-point attempts per game from last season, you will indeed find that most of them -- 21 of the 25 -- shot better than 35.9 percent on threes. But those other four guys shot worse than league average from long-range. Two of them will play for the New York Knicks this season. 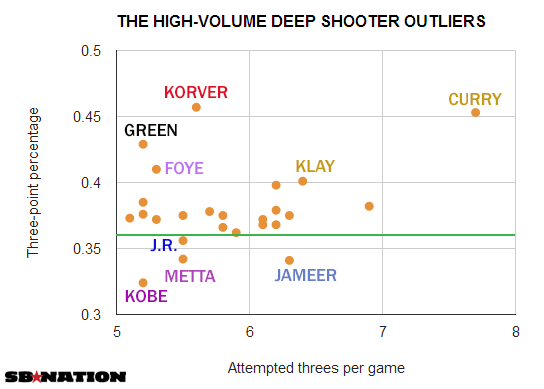 The four guys in the top 25 in three-point attempts per game but below the league standard in converting them: Jameer Nelson, J.R. Smith, Metta World Peace and Kobe Bryant. These guys took at least five threes per game despite being below league average. Jameer took more than six per game while shooting 34.1 percent.

But there's another option: pass up the shot, and let a teammate take it. When you add up Smith's less-than-average efficiency on threes, not-great-efficiency on twos and less-than-stellar foul drawing, you get an inefficient scorer. He's using about 19 shooting possessions per 36 minutes. Studies exploring the trade-off between usage and efficiency indicate that if he cut down some of those shots, he'd end up more efficient, assuming he cut the least efficient shots out. And looking at the four players below the line on the chart above, we all know they have inefficient long-range shots they can cut out of their game.

And this is the second way to look at the data: three of those four guys definitely had shooters on their teams who would better use the extra shot or two. Smith had Steve Novak, Chris Copeland, Iman Shumpert, Pablo Prigioni and even the rather efficient (last season) Carmelo Anthony. Kobe and MWP had the Steves, Nash and Blake. Poor Jameer, on the other hand, had a pretty horrid supporting cast in terms of shooting. Top weapon Arron Afflalo shot just 30 percent from long-range, suffering from too large a role and too much defensive attention. J.J. Redick (pre-deadline) and Beno Udrih (post-deadline) were better options than a Nelson three, but he didn't play a ton with either. So Jameer gets a pass despite not delivering the pass.

This all comes back to the shot creation debate. How much value do we place in, say, Kobe getting off five threes per game, which is something that every player cannot actually do? Now consider that only 62 percent of his made threes are assisted. Isn't there room to cut out those attempts? But will teammates do anything better with them? It's a big question for which we don't quite know the answer.

The other thing to take away from the chart up there: Stephen Curry should probably shoot 40 times per game. Good lord.

... and the 20-year-old Ben McLemore, who was one week old when Mullin last played in an NBA All-Star Game, discovers what the legend was known for.

"I mean, did you see those shots?" he continued. "Those shots are crazy. The way he shoots the ball ... I am definitely going to keep listening to him."

Shooting is one of those skills that can survive the aging process, which allows it to be passed down through generations more actively than, say, elite rebounding or shotblocking. (I'm convinced you could field a team of octogenarians who shoot 90 percent from the line. And Steve Nash would only be one of them.)  Shooting, passing or dribbling is the purest skill in the game, and it's vital than today's youngsters learn from the masters.

Also, this shooting display makes a helluva case for a Youngsters vs. Legends shooting contest at All-Star Weekend. I don't know if Larry Bird's back can support taking 15 threes, but let Stephen Curry, James Harden and Damian Lillard try to outshoot Mullin, Reggie Miller and, hell, Dell Curry. You would watch this and root for the legends. You know you would.

THE PHILIPPINES ARE THE GREATEST

You know why I can't wait to see The Philippines in the 2014 FIBA World Cup?