Derrick Rose brings back The Roar

It wasn't the smoothest home debut, but after 18 months of sitting on the sidelines with a torn ACL, Derrick Rose brought back a feeling that hasn't been seen in Chicago in a long time.

Share All sharing options for: Derrick Rose brings back The Roar

CHICAGO -- If replacing a legend is the hardest thing to do in sports, the United Center might qualify as the Brent Barry of NBA arenas. The UC has been home to the Bulls and Blackhawks since it opened 18 years ago, but locals of a certain age are quick to remind you it will forever be playing catchup.

Just as Barry replaced Michael Jordan as the Bulls' starting shooting guard in 1999, the United Center replaced Chicago Stadium. Even after three NBA titles and two Stanley Cups, the idea that the UC will never be able to measure up to the old building remains prevalent.

It's not entirely unfair. On the average day, the United Center can emit a distinct corporate vibe. Basketball is an essential part of Chicago's soul, but it takes just one look around the first level of a Bulls game to realize the people watching from the best seats aren't the ones that helped make it that way.

It isn't unusual for a United Center crowd to drop to near silence after a few bad offensive possessions at the start of the game.  It isn't unusual for the loudest cheers to happen during the frivolous between-quarters entertainment. Come for the basketball, stay for men in blazers dancing to the chorus of "YMCA." The old guard swears it didn't always used to be this way. Modernity has its perks, but money can't buy cachet.

The Roar, though, is an entirely different beast.

The Roar is the first and last thing you need to know about the legend of Chicago Stadium. It was loud, loud in a way that can no longer be understood by a new generation glued to their smartphones. But under the perfect storm of circumstance, even the impossible can be re-imagined.

On Thursday night, Derrick Rose played a meaningful basketball game in Chicago for the first time 551 days. For a night, The Roar was back. It felt like it never left.

"Derrick Rose is a franchise player. It’s a totally different situation than what I am."

Rose wasn't Chicago's only native son playing at the United Center on Thursday. Knicks guard Iman Shumpert was there too. A hometown isn't all that links the two players. Rose and Shumpert each suffered the same career-altering injury on the same day, a torn ACL on April 28, 2012.

For Rose, the injury was much more than just that. It was the centerpiece of a massive advertising campaign by Adidas, a symbol of a lifeless Bulls offense last season and a dark cloud hanging over a city that loved nothing more than watching its hometown savior detonate opposing defenses on the basketball court.

The 18 months it took Rose to get to Thursday night, back playing again in front of the city that nurtured him, felt like a lifetime. Rose was cleared by team doctors to play in early March, but something within him prevented his return. Rose couldn't bear the thought of being anything less than the player who became the youngest MVP in league history in 2011. He was too damn proud to be anyone but Derrick Rose.

While Shumpert returned after eight and a half months and was jumping out of the gym to hammer home putback dunks during the playoffs, Rose sat on the Bulls' bench eating candy while teammates, battered and beaten from an 82-game schedule and playing through their own various ailments, went blow-for-blow in the postseason with the Brooklyn Nets and Miami Heat. Joakim Noah gamely battled through a nasty case of plantar fasciitis. Luol Deng came down with meningitis, and his reaction to a team-prescribed spinal tap caused rapid weight loss and a week-long stay in a hospital bed. Kirk Hinrich ruptured his calf. One game after Nate Robinson did his best Rose impression, scoring 29 points after the third quarter to will the Bulls to an impossible playoff victory against the Nets, he was seen vomiting on the bench.

The nauseating, anxiety-laced reaction to Rose's status that swept through Chicago overshadowed a truly inspiring postseason run from the Bulls. This was a team that had no business winning their first round series, let alone taking Game 1 against the eventual champion Heat. The biggest problem was that Rose refused to rule himself out, saying only that he would play when he was ready.

It created an atmosphere where many foolishly expected him to play in the playoffs without a minute of regular season action. Slowly but surely, much of the public opinion on Rose started to shift.

The Derrick Rose that returned on Tuesday against the Heat in the regular season opener is not the same player who captured the heart of a nation a few years back. The injury changed him. He's nastier now.

The start of Rose's career always seemed to be defined by his personality as much as his play. Rose wasn't just a superstar, he was a superstar with humility. He was anointed the NBA's reluctant leading man by the media from the moment he became a national commodity. He was a humble star from humble beginnings. It was a narrative forced down the throat of anyone paying attention.

Rose was the player who once said Memphis' backup point guard was more prepared for the NBA than he was. He consciously deferred to upperclassmen in college and veteran teammates his first few years in Chicago. He apologized for his mistakes during film studies even when he was producing at All-Star levels. Once, when Rose was told he was playing well, he responded: "I wish."

That player is long gone. Perhaps fueled by the criticism he received during an unparalleled layoff, Rose isn't just comfortable with the acknowledgment of his place among the NBA's elite. He seems hellbent on proving to everyone he's only coming back stronger.

In the weeks leading up to the season, Rose said some things that didn't just seem out of character, they almost seemed deranged. When questioned about his mindset on the court, Rose said he'd kill his own mother if she was trying to defend him. He called himself the best player in the league. He dismissed the Indiana Pacers as a rival. He said his vertical leap had improved five inches.

"I think every team, every player I play against is coming for me," Rose said. "Who don't want to make a name off me right now? I always think about that and take that into consideration when I'm going out there and playing."

The guy who cried at the podium when he won MVP? The one who cried on stage when Adidas debuted his own signature clothing line? Emotion is still a critical part Rose's game, only now he's using it for something else entirely. Derrick Rose heard the doubters. Now, he's ready to remind them of what always made him so special. 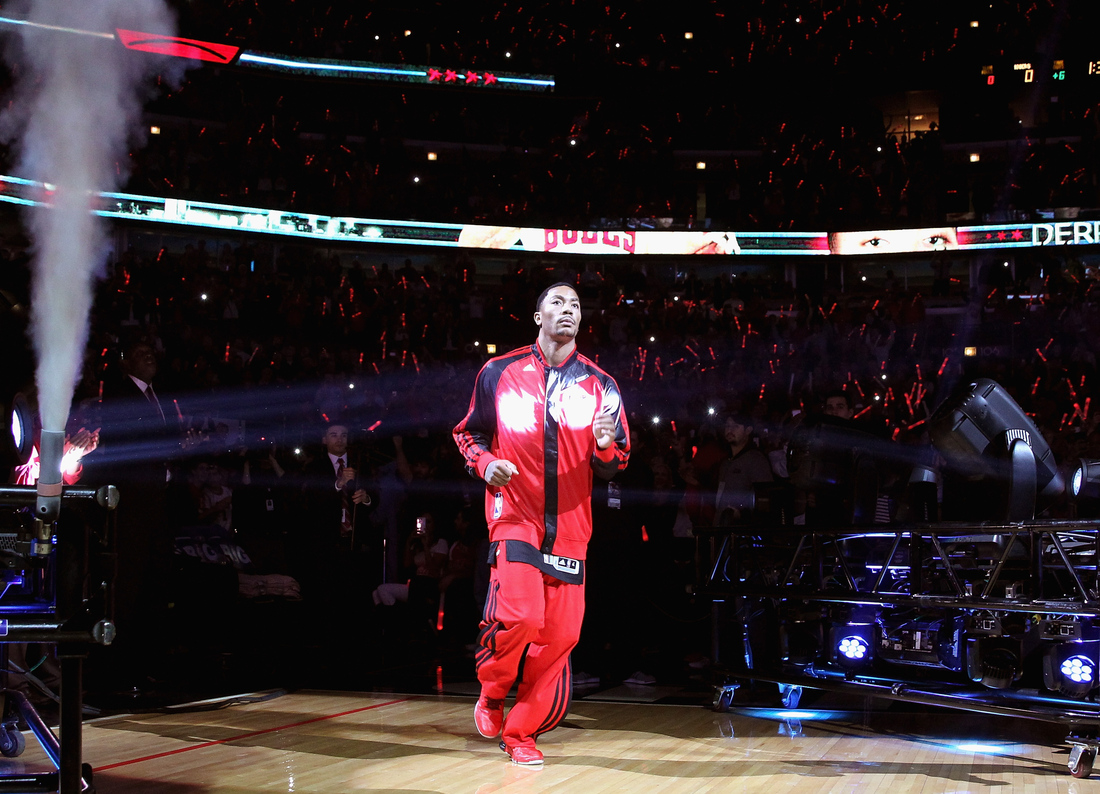 The United Center roared on Thursday night. I'm too young to remember the intricacies of my one time at Chicago Stadium -- it was the only game of Michael Jordan's career he was suspended -- but something tells me the old guard would have been proud.

The Bulls' starting lineup introductions haven't changed since the '90s dynasty days, and they're still powerful enough to give even the most jaded sports fan a set of pregame chills. I felt it when the crowd erupted as the lights went down. I felt it when the arena went wild for the introduction of Joakim Noah and Jimmy Butler. When it was time for Rose's name to finally be called, the United Center collectively blacked out from euphoria.

The stage was set for Rose to come out and tear the Knicks limb from limb, but it didn't start out that way. Rose began the game 2-for-9, looking all the way back athletically, but still clearly showing signs of rust when it came to court awareness, finishing ability and a sense of when to be aggressive. Rose badly wanted to dominate, but it just wasn't happening. He was pressing, and the Bulls held onto a slim lead throughout almost the entire game in spite of his effort as much as because of it.

The Knicks took their first lead on a Carmelo Anthony jumper with four minutes remaining, and the United Center tensed up. The moment was too perfect to go awry. Tyson Chandler split a pair of free throws to put the Knicks up one with :10 seconds remaining. Rose had been ice cold for the majority of the night, but there was no question who was getting the ball on the final possession.

Rose took a pass from Jimmy Butler on the right wing and made his move. Raymond Felton's defense was impressive, and Chandler came quickly on the help defense, but it didn't matter. This was Derrick's night. As he approached the baseline, Rose pushed the ball just barely over the outstretched arms of Chandler. The ball swooshed through the net.

Rose is Chicago's favorite son, its hometown hero, its long awaited continuation of Jordan's superstar legacy. Still, when it comes to these Bulls, it's Noah who qualifies as the heart and soul.

Noah was grabbed for the post-game interview on the court right after the final buzzer, with a delirious crowd still in wounded up from Rose's heroics.

Chicago did, too. The Roar was back, and so was Derrick Rose.

• The King's Revolution: How things changed since LeBron made The Decision