The two sides of every ballplayer

Share All sharing options for: The two sides of every ballplayer

Were you aware that human beings are completely and utterly asymmetrical. In fact, if you meet someone who isn't, it's probably the first sign that we have been infiltrated by replicant cybermen. (Although Mike Trout, seen above, comes suspiciously close to being symmetric.) Nobody has ever illustrated our asymmetry better than photographer Julian Wolkenstein. By simply reversing half of his portraits and mating them with the other half, he has showed that we are essentially two different people mashed together, as though by Dr. Frankenstein.

We thought it would be fun to apply the Wolkenstein method to the photographs of some famous ballplayers. Here are the results:

Left sides: Laughed off the high-school football team because his uniform pants wouldn't stay up, Left Sides Oscar tried out for baseball in the spring, but wasn't assertive enough to swing at any pitches. His doleful look, however, caught the eye of his high-school drama teacher, who cast him in a series of comedic roles. After graduating, he made his way to Hollywood where he embarked on a relatively successful standup comedy and acting career. His best-known moment came in 1975 when he was invited for a sit-down with Johnny Carson on The Tonight Show and his hair completely blocked Ed McMahon.

Right sides: "How do I pitch to Right Sides Oscar?" Jim Palmer once asked. "With tears." His steely gaze was the undoing of many a young pitcher. Several simply walked off the mound and joined monasteries -- or so Joe Garagiola told the story. As stretchy as the polyester uniforms of the 1970s were, the Cleveland Indians still had to have Right Sides Oscar's custom-made to accommodate his incredible bulk. "Even his hair has muscles," Reggie Jackson would say, "And he has a lot of hair." 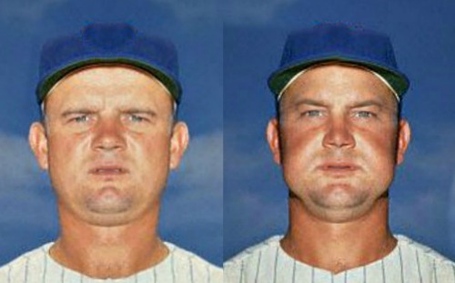 Left sides: After a failed try-out with the Brooklyn Dodgers in 1949, Left Sides Don opened a filling station on the outskirts of Cincinnati, where he can still be found today.

Right sides: Little is known about Right Sides Don, except he might be the real father of actor Randy Quaid. 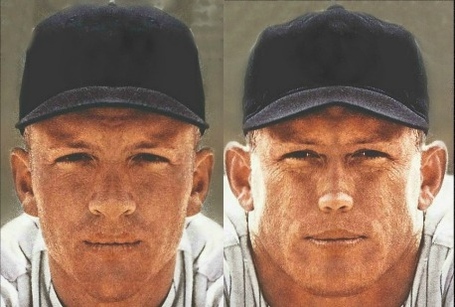 Left sides: The lead and zinc mines in Picher, Oklahoma, aged a man fast. So if he could, he'd get out while young and take up another line of work, such as farming. That's what Left Sides Mickey did: got out of the hole to burn in the sun. Endless days in the dark gave way to endless days baking brown. And no matter hard he worked, there was never enough for him and his, leaving Left Sides Mickey a scarecrow of a man.

Right sides: In the dark days of early 1942, it seemed as though evil would usurp the earth. At every turn, Allied forces were on the run. Could nothing stop the Axis hordes? Working in a secret laboratory, a government scientist developed a serum that might help deliver victory, but he needed young boys on which experiment. He was delivered a group of lads on the cusp of puberty. One 10-year old seemed an especially promising subject. He was given the serum and the transformation was almost instantaneous. He went through puberty in a matter of moments and emerged a powerfully built specimen with the speed of a gazelle. Vigorous military training followed, until he was ready to be unleashed on America's enemies, who paid a dear price for trifling with liberty. At the conclusion of World War II, Right Sides Mickey signed with the New York Yankees and hit 937 home runs. 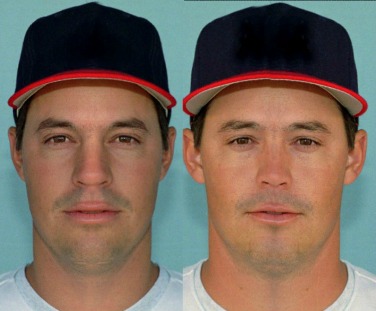 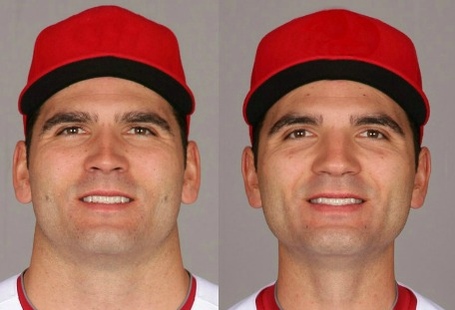 Left sides: After not making an out in three years of Little League play, Left Sides Joey was drafted by the Cincinnati Reds at the age of 13. His .629/.834/1.145 line in rookie ball prompted a promotion to the major leagues, where he won six straight MVP awards before missing a season with a strained awesome.

Right sides: Is this the most dedicated man in all of professional baseball? Since he was a small boy, they all told Right Sides Joey that he would never fulfill his dream but was determined to prove them wrong. He studied and worked tirelessly while drinking protein shake after protein shake to get his weight up to 135 pounds so that he would be strong enough to handle the job at hand. At every rung of the ladder they laughed at him and said, "You'll go no higher than this." Then, finally, in 2013, he got the call. At 30, he was now the oldest batboy in the major leagues!