Fumblr: Let's take away Clay Matthews' thumbs and make him play with hammer-hands

In Week 11 of Fumblr: Making Clay Matthews the perfect weapon, why you're doomed to hate announcers, Terio, tip drills and more.

Share All sharing options for: Fumblr: Let's take away Clay Matthews' thumbs and make him play with hammer-hands

Fumblr is the fake social media platform for NFL fans. It runs every Tuesday during the season, except when it runs on Wednesday.

Just give Clay Matthews two hammer-hand made of tape, forever, and fulfill my Mutant League Football fantasies at last.

For those of you who didn't have a Sega Genesis console in the mid-90s: Mutant League Football was a video game in which the human athletes were replaced by zombies, aliens and various mutated super-humans. Its philosophical premise was, "Sure, football's violent. But what if it were MORE violent?" And so you could wire the ball to detonate, deliver an electric shock to offensive players, and even bribe or murder the referee (thanks for the inspiration, South American soccer!). Things like this happened: 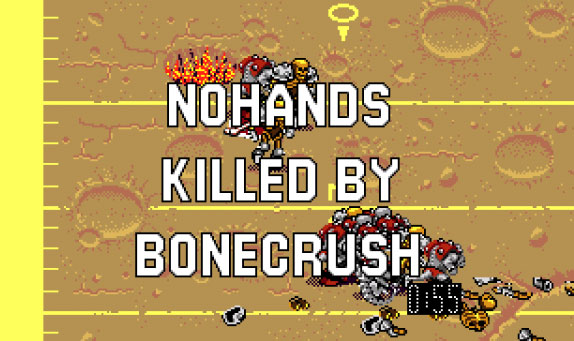 And so, at the behest of SB Nation's Editorial Director, I have brought NOHANDS back to life: 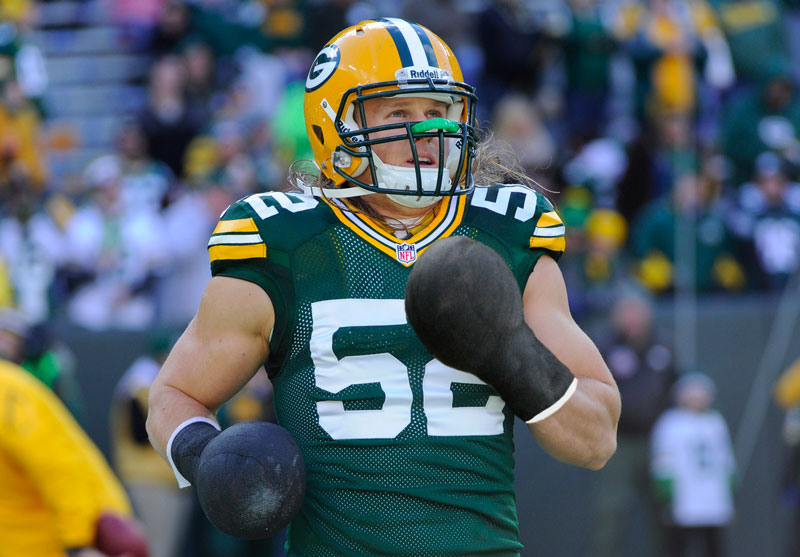 Oh, I like this very much. The experience of watching football would be improved dramatically if all offensive and defensive linemen had to play with simple clubs instead of hands. Holding would be almost completely eliminated. Tipped passes and fumbles would become circus events of clumsy flailing. We'd have to give the center use of his dominant hand, of course, but otherwise this is a flawless plan. Get on it, Goodell.

But if it's the Mutant League we're trying to create, why stop at a simple club-hand made of tape? Why should my Photoshop stop at the bounds of realism? You want hammer-hands? You get hammer-hands: 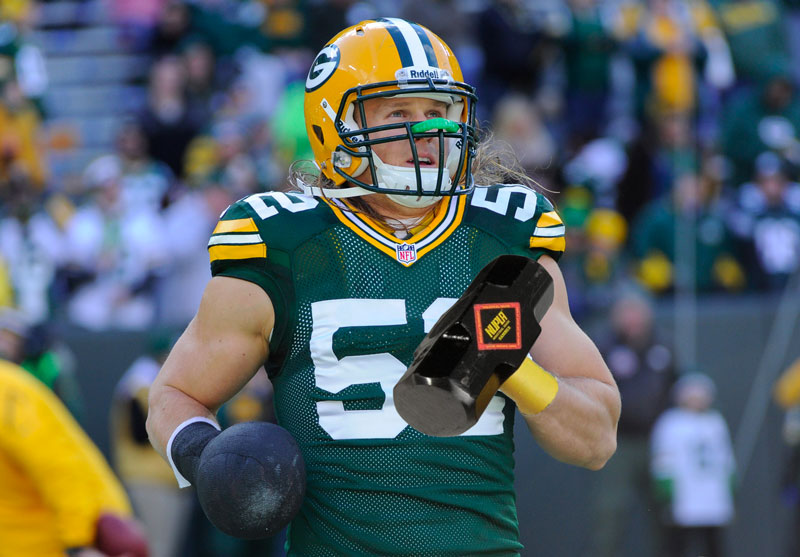 SLEDGE MATTHEWS is a much cooler name than "Clay."

While I enjoy the prospects for blunt force trauma should Matthews play with a variety of hammers for hands, we still haven't reached the ceiling for maximum violence. Is there any way we can maintain Matthews' bludgeoning ability while also giving him the opportunity to cleave players open at the shoulder joint? 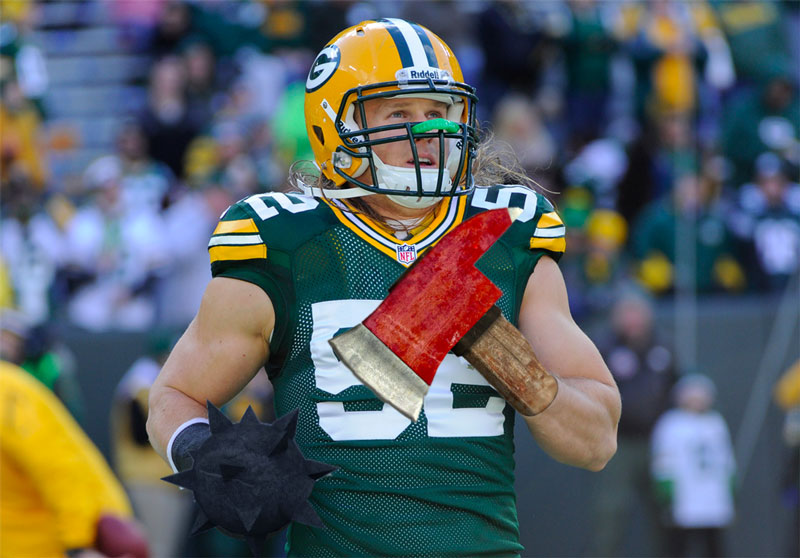 Much better! The fire axe perhaps looks less fearsome than a sledge, but it offers a faster route through things like wooden doors and human bones. Please also note an upgrade on Matthews' right hand, where I've stolen an innovation that dates back to the Holy Roman Empire, when a Germanic sadist said, "Hey, why settle for a simple mace when this morning star can deliver puncture wounds from even glancing blows?"

All of these modifications, however, still require Matthews to run all over the field to chase down and maim ball carriers. That's hard work, especially when you have weights attached to your wrists. So let's give him a weapon with range: 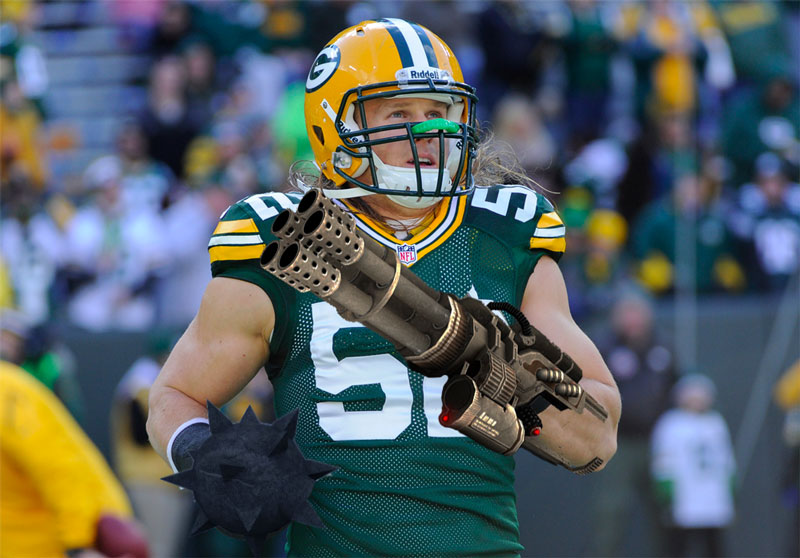 He is gonna get SO fined.

I watch Monday Night Football on mute. It's not a rejection of the MNF crew: I think Mike Tirico is one of the NFL's best play-by-play men, and Jon Gruden's enthusiasm has at least had room to blossom since Ron Jaworski left the booth. I don't reject Tirico/Gruder, per se; I just prefer silence while I collate the Internet ephemera that becomes this column.

But a lull in productivity led to me clicking "unmute" in the first half of Dolphins-Bucs, and this is what I got for it:

I don't understand how Gruden can be so famously dedicated to film study and game preparation, yet completely miss an imperative detail like "how to pronounce a name correctly." It's so overtly wrong that it has to be intentional: In a massive news and entertainment company like ESPN, some producer has to have said, "Uh, Jon? It's actually pronounced Tan-uh-hill." At which point he was fired, I assume.

But the larger point is this: People who love football enough to (a) watch a lot of it on TV and (b) seek out intelligent commentary on the sport will inevitably find themselves annoyed with announcing teams. This is true of other sports, as well, but especially so in football, where the actual game play is limited to short spurts, leaving the commentators to fill the air with their thoughts during the multiple replays shown in the long gaps between downs.

The result is three or three and a half hours of two people talking more than they probably need to, which is more than enough to expose tics in speech patterns and foibles of pronunciation, and those peccadilloes become unforgivable sins over the course of a game, a season, a decade in the booth. This is why I want to strangle the life from Al Michaels every time he says "New Orly-ins."

If you're unhappy with Jon Gruden in the Monday Night Football booth, it's likely only because you've forgotten the previous iteration of Tirico and Gruden with Ron Jaworski, which typically devolved into Jaws and Gruden trying to see who could talk more loudly and passionately about any given player. Or Tirico, Jaws and Tony Kornheiser, who was mostly concerned with complaining about travel and could barely be troubled to care about the game. Or Tirico, Kornheiser and relentless quarterback-praiser Joe Theismann, whose one gift as an analyst is saying the stupidest possible thing imaginable. Do I even need to mention Dennis Miller?

Announcing teams will never be perfect, not until Gus Johnson is the lead play-by-play man while Chris B. Brown provides analysis while watching All-22 footage in real time. Then we clone them and put their doppelgangers in every booth. THAT would make for an intelligent and exciting experience -- oh, except Gus Johnson is terrible now. I'd forgotten that part of our job as Internet-savvy fans is to take something accepted as good, and tear it to shreds with criticism.

Last year, it took NFL players several months to implement "Gangnam Style" into celebratory dances. And while the original Terio video that went viral was posted in late July, it was hardly the omnipresent cultural sensation of PSY's infectious hit. So props to NFL players for being more dialed in to Internet culture this year, and especially to Justin Tucker, the rare kicker with enough attitude to celebrate with a dance move.

Lucky bounces are the best bounces.

The Dolphins' final four offensive plays on Monday night went like this: sack, sack, incomplete pass, interception. The pressure on Ryan Tannehill was not lost to those on Twitter.

Sure seems like the Dolphins could use two extra starting offensive linemen right about now.

The Miami offensive line appears to be having communication issues. Go figure

Congratulations to the Jaguars and Bucs on their first wins of the season! But be careful with that win column, dear Florida teams, as the Vikings are also dangerously bad. I'd hate for you to spoil your draft position just for the brief high you get from this: