Thunder U is alive: How Oklahoma City has restocked its young talent

Under our radars, the Oklahoma City Thunder have stockpiled a ton of young talent that's now starting to grow on their bench.

Share All sharing options for: Thunder U is alive: How Oklahoma City has restocked its young talent

If you listened to many pundits, the Oklahoma City Thunder started the season with barbarians at the gates. Not only had they traded James Harden for "15 cents on the dollar," they let the biggest piece they got back (Kevin Martin) walk for nothing. To make matters worse, they had been conspicuously absent on the free agent market. If the Thunder were not willing to spend, how would they ever be able to convince Kevin Durant to re-sign in 2016?

Two weeks in, Russell Westbrook's early return from knee surgery has staved off panic, as Oklahoma City is off to a 5-3 start. The real story, though, is happening on their bench, where two of the lottery picks they received for Harden (Steven Adams and Jeremy Lamb) are starting to come into their own. The Thunder are attempting something pretty remarkable: trying to contend for a title while also developing four first-round picks on their bench.

Most elite teams bring in veterans and get older, but Oklahoma City has been getting younger. Martin, no matter how well he played, was always supposed to be a stopgap. They didn't sign many free agents this off-season because they didn't want to block Adams, Lamb, Reggie Jackson and Perry Jones III, all drafted in the last three years. Only three players in their rotation -- Kendrick Perkins, Thabo Sefolosha and Derek Fisher -- are not home grown. Coincidentally enough, those three also have the lowest PERs of anyone in the rotation.

Passing of the torch 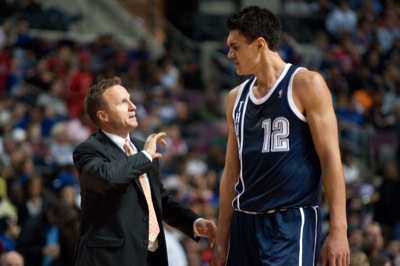 For large stretches of the game, Oklahoma City can put five players on the floor who have never played for another organization. The younger ones have only known winning situations; they never had the chance to develop bad habits. To a man, the players the Thunder draft share similar characteristics: long, athletic and with the skill set to play multiple positions.

At 23 and in his third season, Jackson is the oldest of the new generation. Like Westbrook, he's a converted combo guard with excellent size for a point guard - 6'3 and 210 pounds with a 7'0 wingspan. That size allows him to swing between both backcourt positions; he runs the second unit and is instant offense on the first team. After breaking out in the playoffs, he is off to a solid start, with per-36 minute averages of 14 points, six rebounds and six assists on 43 percent shooting.

None of the four has been under a harsher spotlight than Lamb, who became a punching bag for his role in the Harden trade. While he didn't play much in Oklahoma City, he tore up the D-League as a 20-year old. At 6'5 and 180 pounds with a 6'11 wingspan, his outsized arms impact the game in a number of ways. In college, he showed the ability to score, shoot, rebound and defend at a high level. Per-36 minutes, he is averaging 17 points, four rebounds and two assists on 41 percent shooting.

The Thunder bought low on Perry Jones III, the No. 28 pick in 2012. In 2011, Jones and Tristan Thompson were both second-team All-Big 12 selections, so if Jones had declared after his freshman season, he would have been a lottery pick too. He's 6'11 and 235 pounds with a 7'2 wingspan and a 38' max vertical, and he can shoot corner 3's! Still only 22, he would be a college senior this year. He has per-36 minute averages of 11 points, six rebounds and two blocks on 50% shooting.

The one getting the most buzz is youngest of the bunch, 20-year old center Steven Adams. Defying expectations that he would be a project, Adams (the No. 12 pick in 2013) has muscled his way into a valuable role right away. At 7'0 and 255 pounds with a 7'5 wingspan, he has prototypical size for the center position, quick feet and a surprisingly soft touch. In the fourth game of his career, he went for 17 points, 10 rebounds and three blocks on 7-10 shooting.

This is how Oklahoma City has more under-23 talent on their bench than many rebuilding teams have on their whole roster. The Thunder have an average age of 26.3, only slightly higher than the Celtics (25.9) and Bobcats (26.0). As their young players become more comfortable in their roles, the team will only get better. Players in their second and third seasons can make dramatic leaps in a few months, and their cost-controlled contracts are the best bargains in the league.

In other words, Oklahoma City was simply re-stocking the farm system with the Harden trade. The Harden deal was the kind of move the Oakland A's and Tampa Bay Rays make all the time: trade a guy about to hit free agency for young players and draft picks. It takes a couple years to really evaluate those type of trades. Consider: the Thunder essentially stashed Lamb in AAA last year. No NBA franchise uses their D-League affiliate more. Jackson, Lamb and Jones all had long-stints with the Tulsa 66ers, only a 90-minute drive from the parent club.

It's a best of both worlds situation. The young players learn from Durant and Westbrook in practice and put those lessons into action in the D-League. This season, Andre Roberson (the No. 26 pick) and Grant Jerrett (No. 40) will have big roles on the 66ers. The pipeline isn't slowing down anytime soon. Oklahoma City still has one more pick from the Harden trade coming -- a first-rounder from the Mavericks that loses all protections in 2017.

Sam Presti learned a lot of lessons in San Antonio, none more important than how to keep a franchise player in a small market. The Spurs never spent a ton of money; they drafted young players behind Duncan and created a family atmosphere around the team. In 2016, Russell Westbrook (28), Serge Ibaka (27), Perry Jones III (25), Jeremy Lamb (24) and Steven Adams (23) will all be under contract in Oklahoma City. Why would Durant go anywhere else?

• The Hook: D-Will, Joe Johnson and the overloaded Nets