How good are the Portland Trail Blazers?

With a revamped bench and a high-powered offense, the Blazers are riding a seven-game winning streak. Is the defense good enough to keep pace?

Share All sharing options for: How good are the Portland Trail Blazers?

Last week, the Portland Trail Blazers held off Phoenix when Damian Lillard glided in for a layup at the buzzer. Other than Lillard's uncanny knack for doing fantastic things at the buzzer, it was a completely unremarkable game. There were almost 100 missed shots, 19 clanked three-pointers and 30 turnovers, all of which made for a truly forgettable evening.

But to Blazers' coach Terry Stotts, there was another more important takeaway: his team won with defense. Portland's defense isn't awful. It's mediocre, ranking 19th in defensive rating coming into play Monday night. Despite a big front line led by LaMarcus Aldridge and Robin Lopez that cleans up on the offensive glass, the Blazers are a pedestrian 17th in defensive rebounding percentage. It's an improvement from last season's sieve-like squad, but not one that fits the mold of a contender.

Yet the Blazers are now 9-2 after Monday's 108-98 win in Brooklyn, riding a seven-game winning streak. Basketball-reference had them fifth in its simple rating system, and a quick check of the teams in front of them show four strong defensive clubs. 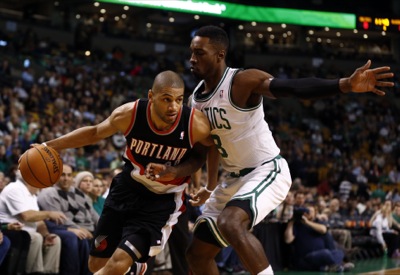 Nicolas Batum is the glue that holds the Blazers together.

The defense doesn't have to be spectacular because the offense has been incredibly efficient. Portland came into Monday night ranked third in points per possession behind only Miami and the Clippers. While Aldridge and Lillard continue to do most of the work, Portland has a bunch of shooters, including Wesley Matthews, Nicolas Batum and Dorell Wright, who are all shooting better than 40 percent from three. Matthews, in particular, has been fantastic, draining 53 percent of shots from downtown threes. When the shots don't fall, the big men have been attacking the glass, grabbing almost 30 percent of the available boards.

The Blazers came into this season expecting to make the playoffs after GM Neil Olshey executed a subtle bench overhaul, but winning nine of 11 to start the season puts them in more exalted company.

"November is so early for everybody," Stotts said on Friday before Portland played in Boston. "We want to be a playoff team, that's our goal. I think we will make the playoffs, but the fact is it's November and we're a tenth of the way through the season. I want to have the confidence that we believe we're a playoff team and we're going to be in the thick of things in April. Right now you can't look down that road."

Considering the recent fate of this star-crossed franchise, that's more than just coach-speak from Stotts. There are subtle signs of defensive improvement, beginning with Lopez, whom Olshey acquired from the Pelicans as the third team in the Tyreke Evans sign-and-trade transaction. The price for the defensive-minded center was cash and a second round pick, one of several under-the-radar moves Olshey was able to pull off last summer.

Lopez's addition has an added benefit in that it allows Aldridge to play his preferred big forward position, where he is once again pumping out 20 and 10 performances. Lopez is no Roy Hibbert, but he's a willing defender who doesn't need touches to be effective offensively.

"Having Robin back there is a comfort for everybody," Stotts said.

The Blazers have gradually improved at protecting the rim, rising from 22nd last season to ninth in field goal percentage defense in the restricted area, per NBA.com's stats page. Portland has really tightened up on the perimeter. where teams are only shooting 29 percent from behind the arc. That's indicative of a team-wide effort.

"It's how we focus on our defense," Lillard said. "I think we take a lot more pride this year. Everybody's bought in. We're all on the same page right now. I think it will only get better as we start to get more comfortable with each other."

By far the biggest change for Portland this season is an upgraded bench. Here's where Olshey did his best work. With just a bit of flexibility under the cap, Olshey went shopping in the bargain aisle and grabbed Thomas Robinson from the Rockets in a salary cap dump for a couple of European prospects and second-round draft picks. Robinson is on his third team in barely over a season after the Kings made him the fifth pick in the 2012 draft. His offensive game is limited, but on this team, he only needs to provide energy, defense and rebounding. He had a monster 15-point, eight-rebound effort in the win over the Suns and chipped in with nine points and seven rebounds in only 13 minutes of action against the Nets.

Olshey also strengthened the perimeter with two free agent signings for essentially the price of one mid-level deal. Wright came on board in July for a two years and $6 million, and Mo Williams was signed in early August to a two-year deal worth just over $5 million and an opt-out after this season. Wright's shooting is a massive upgrade over the likes of Sasha Pavlovic and Luke Babbitt, while Williams offers another ball-handler and scoring option to take some of the load off Lillard.

That improved depth is crucial, because Portland's starters played the fourth most minutes together in the league last year, per lineup data made available to media members, and they were the only one of the top seven lineups to have a negative differential. It certainly wasn't a lack of talent that held Portland's starters back last season. It was simply playing too many minutes, and too many hard minutes at that.

Where all of this leaves the Blazers in the loaded West is anyone's guess at the moment, but it does put them in the discussion along with the other emerging teams like Golden State and Minnesota. It stands to reason that their hot shooting will come back to earth a bit and the defense will have to continue to improve to sustain this pace, but they finally appear headed back in the right direction.

• The Hook: What did the Knicks expect?

• Nicolas Batum is Portland's Mr. Everything