Predict the next awful contract to get traded

Share All sharing options for: Predict the next awful contract to get traded

Vernon Wells was traded. He had $89 million left on his deal over four years, yet another team actually gave up a good player for him.

Carl Crawford was traded. He had $112 million left on his contract over five-and-a-half years, and he was coming off an awful season and Tommy John surgery.

Prince Fielder was traded. He's owed $168 million over seven more years, he's coming off a down year, and he ... doesn't have an ageless physique.

Long intro short: Anyone is tradeable. Throw in enough cash or the right player, or find a team silly enough, and anyone could move. Would you want Albert Pujols on your team for the league minimum next year? Of course you would. Probably for $5 million. Probably for $10 million if you're feeling froggy.

Let's look at the worst contracts in baseball, then, and predict which one will get traded in a deal that makes us all blink a lot before processing what just happened. Because one of these players is going to get traded, and it's going to blow your mind. Someone took Prince Fielder on purpose. And it made sense. So anyone is tradable. 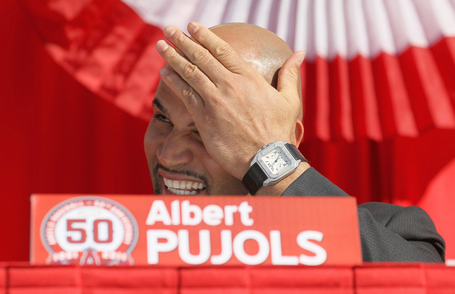 Almost anyone. But here are the Worst Contracts in Baseball, Give or Take:

Was going to include Ryan Braun, who is about to turn 30 and is owed $117M over seven years … but that's almost reasonable. Hunter Pence got something similar, but for two fewer years. If Braun is on the market today, even with the dark stain of sin upon his visage, he gets that. Easy. Wait until you see what Jacoby Ellsbury gets.

Several people mentioned Bobby Bonilla, who is getting $1.2 million per year from the Mets until 2036, but that won't be enough to buy a Mazda in 2036.

So if we're looking for players who are less likely to be traded, we can whittle down the list. For example, it is my opinion, and therefore I believe, that in my experience, Albert Pujols is not likely to be traded. The same goes for Alex Rodriguez. We can manufacture a scenario in which they're traded, but if we're looking for the next bad contract to get moved, no way.

Regardless, neither of those guys are moving without scores of millions going the other way. It makes sense to focus on the bad contracts that wouldn't take $60 million to $100 million to move, which leaves us with ...

Again, Werth was really good last year. Even though he's 35 next year, teams would overpay for the power in four years just to get it in 2014. So he could move, but that brings up an important piece of context: These teams have to be willing to deal veterans and eat money because they aren't contending. I think the Nationals are doing okay both short- and long-term. They can afford to overpay a couple guys for now. Werth isn't on the final list.

Crawford is an outfielder on a team with four outfielders. He's exceptionally likely to go before a lot of these guys. But the presence of two other outfielders on the roster who could get traded makes me hesitate. The Dodgers would need to eat money with Crawford. Would they with Ethier? Maybe not. Which means I'd trade Ethier before Crawford, and the Dodgers probably would, too.

Teixeira's deal isn't that onerous, especially when you consider it's $20 million less than Ryan Howard's deal. But it's hard to picture the Yankees paying him $20 million or more to play for another team, A.J. Burnett-style. Not with how desperately they're propping open this window of contention.

I'm going with Hamilton. He'll get off to a hot start, and the Angels will be willing to eat $40 million, and you'll think, "Well, $66 million isn't that bad." Because you'll be caught up in the moment. Might even be willing to give up a prospect. Then, whammy, he'll be 34, making $32 million a year, and you'll wonder how you didn't see it coming.

Josh Hamilton and $35 million to the Cubs for Edwin Jackson at the end of the 2014 season. The cycle of Rule 5 life is renewed. You read it here first, and then you forgot about it because the idea was stupid. But don't forget you read it here first.