Should the Cavs' GM be on the hot seat? Plus: dispatches from the outer reaches of Dolanville and the Mamba's lockout gambit.

Share All sharing options for: Blaming Chris Grant as the Cavaliers flounder

Cavaliers general manager Chris Grant is taking an incredible amount of heat as Cleveland gets off to a rough start despite high expectations. The team is 4-8 against what Basketball-Reference deems the fourth-easiest schedule in the league to date. The Cavaliers have home losses to the Bobcats and Wizards and road losses to the Bobcats, Bucks and Sixers. An opening-night win over the Nets was once considered a sign of great things ahead; instead, the Nets are awful and that win loses its shine.

More importantly for Grant, No. 1 pick Anthony Bennett has been cringeworthy, Dion Waiters has been a ball of trouble and the offseason additions meant to push the team into the playoffs -- Andrew Bynum, Jarrett Jack and Earl Clark -- aren't helping much.

Grant built this team largely through the draft, and that has yet to pay fruit. Six first-round picks taken within the past three drafts are on the roster: Kyrie Irving, Tristan Thompson, Waiters, Tyler Zeller, Bennett and Sergey Karasev. Zeller and the rookie Karasev are, right now, bit players. Bennett is playing 11 minutes per game, few of them good. Some fans have already booed him. His career is now three weeks old. Irving is Irving and Thompson's shown improvement. (Thompson's still underwhelming in the box score, but it's a better brand of underwhelming.) Waiters has been benched amid a cloud of rumors about rifts with Irving and/or coach Mike Brown. More importantly, Waiters is shooting an effective field goal percentage of .420. For a guy brought in to be an effective supplemental scorer -- the Klay Thompson to Kyrie's Stephen Curry -- he's not doing the job.

And therein lies the problem for Grant: the 2011, 2012 and 2013 drafts were all weak. But other teams found good players in there, whereas of those six Cleveland picks -- four of them in the top four -- the Cavs have one star, one good prospect and little else right now. It's early for all of the prospects, but by signing Jack and Bynum and aiming for the playoffs, Grant shortened his timeline to compete. The smart plan to rebuild through lots of draft picks doesn't mesh with a win-now approach evident in the offseason. That philosophical incongruity mixed with what looks like an iffy drafting record at best is a potential nightmare for Grant.

When Grant set out with the draft plan, it required patience. I don't know what changed -- Dan Gilbert? The prospect of LeBron? Kyrie's future? But it's short-circuiting the plan and bringing all those prospects into major scrutiny well before they should be. We shouldn't be freaking out about Waiters and especially Bennett at this point, but because the Cavaliers expect to be better and need those guys to produce to achieve that, here we are.

FEAR THE SWORD: Where is the effort?

As you know by now, Knicks owner James "Jimmy" Dolan spoke to a member of the media for an extended period of time on the record. The Post's Mike Vaccaro has the Q&A. It's pretty wide-ranging. Of particular interest ...

MV: Because the first year was that important?

JD: We would not be where we are today without Amar'e. That summer, the summer of "The Decision," there were a whole bunch of free agents, and the guys put their thing together in Miami, and Amar'e agreed to come to the Knicks, gave us a launch pad by which we could convince the other guys like Tyson [Chandler] to come, and ultimately Carmelo to come play with us. Do I think Carmelo would have come if we didn't have Amar'e? No, I don't think he would've. These free agents, when you get to this level of player - the Carmelos, the LeBrons, the Durants - the first thing they want before the money or anything else is to be on a winning team. They've got to believe they have a shot.

Emphasis mine. Is that accurate? 'Melo left a 32-25 team to join the 28-26 Knicks in 2011, and New York went .500 the rest of the way. The Knicks seemingly offered more than anyone else to Chandler that offseason, and he left the reigning NBA champions to join New York. With Amare and then 'Melo, the Knicks were obviously positioned to compete. Could it have happened without Amare in the first half? If the Knicks would have failed as hard as the Nets in 2010 free agency, would 'Melo have still pursued a trade? Remember, he did not pursue a trade to the Nets, and perhaps even actively fought one. Is that because of Amare vs. Brook Lopez, or because of the Knicks, the Garden, the shiny marquee vs. the Nets, New Jersey and the swamp? 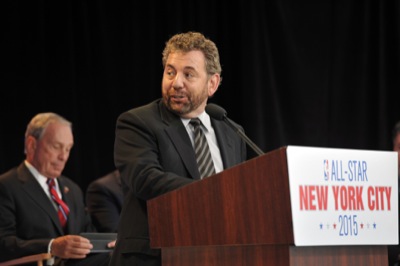 Posting and Toasting has more on Dolan's rare interview

Dolan's quite likely correct that getting Amar'e had extended benefits beyond his production (which, remember, was fantastic that first season). But it seems a bit overstated to me. The real problem is that Dolan thinks 'Melo is interchangeable with Durant and LeBron. And you wonder why expectations are out of control in New York?

The other real problem is that the Knicks totally wasted the single line of protection against Amare's swift decline that they had: the amnesty clause. Remember: the Knicks picked up the $14 million team option on Chauncey Billups in June 2011. After the lockout ended, the Knicks used the amnesty clause on Billups to free up space for Chandler. If the Knicks had just let Billups go in 2011 and added Chandler and resisted the urge to waste the amnesty clause on someone else, New York could have lost Stoudemire this offseason without losing the initial benefits he brought. Oh well.

BILLY HUNTER VS. THE BLACK MAMBA

Billy Hunter's apparent strategy to fight back against Derek Fisher over Hunter's dismissal as NBA union executive director is to ... implicate Kobe Bryant. The accusation goes that Fisher and NBA officials negotiated a secret deal that would have the players compromising on the revenue split and winning on a few other items. Jason Whitlock actually detailed this accusation during the lockout, accusing Fisher of looking to cash in with a plum league job eventually. (Fisher does have a plum job, but it's miraculously on the court.)

In an effort to get paid, Hunter is now saying that Kobe called him at home one night during the lockout, identified himself as "the Black Mamba" and told Hunter to take the deal Fisher had worked out behind the scenes. This is hilarious on many counts. Everyone knows that Kobe really did not want to lose a season to a labor stoppage at that point in his career; reports at the time had the Lakers and Heat pushing hardest for a deal.

If this is indeed how it went down, I wonder why on Earth Kobe reached out to Hunter. All Team Fisher had to do was press Hunter in actual negotiations toward this result or press for a vote. It'd be three more weeks after the first accusations surrounding this came out (via Whitlock) before a deal was struck. If Fisher's deal had support, why notify Hunter and why not press more quickly for resolution?

Did Kobe think he was doing everyone a favor? Is Hunter making this up to put some pressure on Fisher and the new NBPA board to settle? I mean, this is a totally boring episode of Law and Order at worst.

• Why J.J. Redick is thriving in Los Angeles