This week's Debrief explains why the New York Jets are the embodiment of the 2013 NFL, appreciates Nick Foles' seven-touchdowns and tries to understand Week 9.

Bullet points about Nick Foles are plentiful on this fine Monday morning. They should be. We like big numbers, and seven touchdown passes in a single game is impressive, Raiders defense or not. Someone in your fantasy league -- maybe even you -- is thrilled that they used Foles as a bye week sub or spent all Sunday night complaining about leaving him on the bench.

In the interest of appreciation, I'll keep the Foles-related bullet points to a minimum.

Bullet point 1 - Remember all those tweets last week about Chip Kelly and his offense, the one that had scored just three points in two games, had finally met their match in the N-F-ELLLLL? I didn't see any of those this week. Strange.

Bullet point 2 - Kelly has no choice but to make Foles his starter now. That shouldn't be as surprising as people are making it sound. Michael Vick has his speed, and that's about all, still working in his favor. There's Matt Barkley ... ha ha, that's not an option at all. I'll be more interested to see what happens to Foles in 2014.

Philadelphia plays the Packers next week. Clay Matthews is most likely out for that one, but Green Bay's defense is tougher than Oakland's. It's also the toughest game left on the schedule for the Eagles.

He did it for Riley

Give the game ball to Riley Cooper, one of the game balls anyway, because his three touchdowns and 139 yards cleansed him from the ordeal he had to suffer through for acting like an entitled shitheel at a Kenny Chesney concert this summer. Leave it to Peter King to deliver the message on behalf of the PR department.

Foles: "I am so proud of Riley Cooper. So happy for him. After what he's been through, and how hard he's worked, this is great."

Great point, Nick. I really felt like Cooper was a victim when someone unfairly posted a video of him hurling the n-word and threatening a security guard and then had to put up with people who took offense to it. King's history with Cooper incident speaks for itself; he invoked MLK and Trayvon Martin to defend Cooper.

Nobody's advocating that Cooper be attacked every time his name shows up in the box score. That does no good. It's another thing entirely to portray him as a victim when he clearly is not. It's worth remembering that before parroting Cooper's game like some great redemption story.

Who/what are the Jets?

Trying to figure out the New York Jets? One week, they lose by 40 points. A week later, they beat one of the hottest teams in the NFL, decisively. Don't waste another precious calorie of brain energy trying to understand. I would tell you to embrace the mystery, but there isn't one. This is the Jets; this is who they are and what they do.

Odd numbered weeks are for wins. Even ones are for losses. It's Week 9, so it figures that the Jets would follow their 49-9 loss to the Bengals with a 26-20 win over the Saints. You could set your watch by it, but they have a bye in Week 10 which would leave your confused and waking up on Saturday wondering why you're the only one shirtless slob painted green at brunch. I'd tell you to embrace the absurdity, but I can't make 1,200 words out of that. So there's got to be more to it that, right? 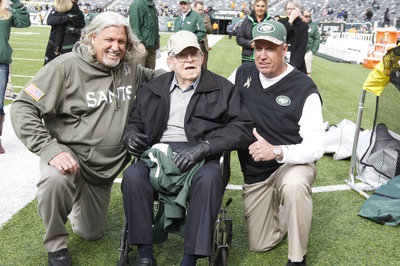 Rex and Rob Ryan's teams have squared off five times. Guess which coach has the better record against his brother?

Turnovers - Rookie Geno Smith has five games with two or more picks. His team is 1-4 when he doubles up, or worse, on interceptions. That one win came against Buffalo, which was also the only game where the Jets had a negative turnover differential and still managed to win.

Running, part 1 - Smith was turnover free for the first time this week. It's hard to turn the ball over when you're only throwing the ball on 35 percent of your plays. Another stat of note: the Jets are 4-1 when they rush for at least 100 yards. Considering the stable of receivers the Jets have, healthy receivers, what choice do they really have?

Running, part 2 - Despite Rex Ryan's confusion about Geno Smith as one of those newfangled read option quarterbacks, he really isn't running the ball very much, an average of 3.33 attempts per game. However, he can be effective when he does take off. The Jets are 3-0 when Smith scores a rushing touchdown.

Geno - From week to week, the Jets have done a good job managing their rookie quarterback. He hasn't thrown more than 35 passes since Week 2. He's averaging a respectable, but not ridiculous, 7.1 yards per attempt. Marty Mornhinweg's offense feels like a better fit for the West Virginia product. That doesn't preclude them from pulling out the wildcat at least once a week, but Rex Ryan is a man entitled to his indulgences.

Special teams - New York's special teams had a 5.0 percent DVOA prior to this week's win, good enough for the seventh best in the league per Football Outsiders. Nick Folk put all four attempts through the uprights this week, extending his franchise-record streak to 23 straight field goals made.

Defense - The most obvious answer to the questions of why the Jets are 5-4. Muhammad Wilkerson, Quinton Coples, Damon Harrison and Sheldon Richardson could not be blocked this week. That's true most weeks, except the even numbered weeks, mostly. This is not a surprise. Whatever fault you may find with Rex Ryan, his defensive acumen cannot be impugned.

Unfiltered - Okay, this has nothing to do with why the Jets are an erratic 5-4, but Rex Ryan deserves a few sentences for just being something other than the well-managed talking points machine the rest of the league's turning its coaches and players into. It is just football, and Ryan reminds you of that every now and then with some random arrow fired from behind the podium. We need more of that.

No team excels at inconsistency like the Jets. It's the perfect summary for what the NFL in 2013, impossible to nail down. 5-4 adds up to parity. The Jets and the tabloids that circle them make it enjoyable.

The Seahawks have allowed 405 rushing yards in their last two games, narrow wins over a pair juggernauts, the Rams and the Buccaneers. Seattle was favored by double-digit margins in both games. Brian Schottenheimer and Bill Sheridan proved to be more reliable 12th men than Pete Carroll could have hoped.

So what gives? Popular cliches tell us that Seattle isn't playing up to its opponents. Maybe that's another way of wondering why Marshawn Lynch only got six of his 21 touches in the first half. Another concern is why the run defense suddenly looks so vulnerable. Carroll's team is 8-1 and still arguably the best in the NFC, so there's that.

As usual, the Patriots don't have to worry about any real competition in the AFC East, barring catastrophe. Tom Brady and Co. made it through a rough stretch of leaning on backup skill players you've never heard of to run that offense. The supporting cast deserves some blame, but we saw plenty of Brady missing his targets. I'm sure we even heard some talk about what happens to most mortal quarterbacks when they hit 36.

Not this week. Brady played the same way that was so easy to overlook in the past. His four touchdowns doubled his best efforts of the season so far. He threw for 432 yards, only his fifth 400-yard game. 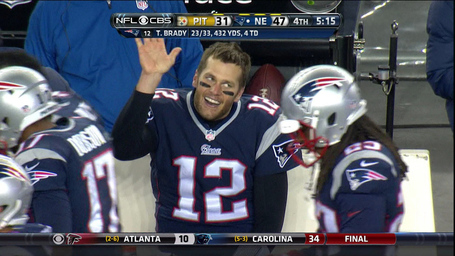 Danny Amendola, Rob Gronkowski and Stevan Ridley were all on the field and healthy. They all topped 100 yards. Gronk scored his first touchdown of the season. Now, the Patriots just need those players to stay healthy to help compensate for a defense missing Vince Wilfork and Jared Mayo.

Let's refrain from making Case Keenum the quarterback of the future in Houston. The undrafted free agent has had two games. However, that doesn't mean Keenum can't be enjoyed and showered with bizarre references from Cris Collinsworth. (Something about a samurai?)

Keenum threw three touchdowns, all to Andre Johnson, and rolled up 350 passing yards while completing 20-of-34 attempts. He also made throws while moving around outside the pocket, hence the gunslinger label. The most important thing about Keenum, for now, is that he's better than Matt Schaub. That gives him eight more games to earn all kinds of monikers, including 2014 starter.

• Washington wins in OT | Seahawks, too