Plus: The Hook argues that Sam Hinkie cannot do anything until the Sixers come crashing back to Earth and that dreams of trading Steve Nash are just that.

This is textbook bad team behavior: get a playoff expectation from the owner, handicap the roster's future assets in an effort to win now, fail, fire the coach. The Wizards need to be in the playoffs, lest everyone in basketball operations lose his head, so the team traded a protected first-round pick for Marcin Gortat to replace the injured Emeka Okafor. It hasn't seemed to help: the Wizards are 0-3.

So, the next logical step is to fire Randy Wittman while the season is still salvageable.

The thing is that it's miraculous Wittman has lasted this long. His record in Washington is now 47-87, a .350 winning percentage. That's not good. He was hired only as a temporary replacement for Flip Saunders in the first place. He kept "reaching" his players by the end of the season, justifying decisions by Ted Leonsis and Ernie Grunfeld to keep him. Wrong decisions, all. The Wizards have had more patience with Wittman's potential as a head coach than the team's had with Jan Vesely or Chris Singleton as legit NBA players. This is a classic case of trusting some good quality, expensive ingredients with a chef whose idea of gourmet is Late Night Bacon. Wittman does not seem to be able to help this collection of players win.

Luckily for Grunfeld, I'm not sure there has ever been a better collection of step-right-in coaches available. Having a stunning nine rookie head coaches land jobs in the offseason sure left a lot of talented sideline stalkers available. Here are three who make sense with Washington once (not if) Wittman gets his walking papers.

Quite possibly one of the best coaches of this era, at least in terms of getting the most out of talent. That's exactly what the Wizards need. It's a bonus that Karl coached Nene in the best years of his career and has had real success with top-shelf point guards like Gary Payton, Ty Lawson and Chauncey Billups. It's an anomaly that Karl is available, owed to Denver's offseason shuffle and other teams' quick action to land new coaches. Karl might be expensive and sure as heck won't be signing on for a short contract. But Leonsis is spending $70 million on this roster. Dropping a couple more to get someone to make this roster work is worth it.

Hollins' calling card in Memphis was getting the players to buy in. He was hostile to front office intervention, and that makes him difficult to hire. But he can coach defense (which is likely to be Washington's strong suit), he has some remarkable patience and he'll get those players to buy in.

A year ago, the Wizards pulled a sneaky replacement strategy by hiring Don Newman away from the Spurs, where he'd been a Gregg Popovich assistant for seven years. Pop assistants are all the rage right now, and I doubt many Wizards fans would complain if Newman took over; he's not your average interim.

If things didn't work out under Newman, hiring Alvin Gentry in the offseason to unleash John Wall and Bradley Beal would be just lovely. Gentry is currently the lead assistant for Doc Rivers in L.A., and assistants rarely switch teams midseason. (Hollins, interestingly, is one such example.)

At this point, the only coach who can beat Wittman to the guillotine is Brett Brown, albeit for entirely different reasons. Speaking of which ...

THAT WHICH SAM HINKIE CANNOT DO

So long as the Sixers are not horrid, there is nothing Sam Hinkie can do. His naked plan was to be pretty awful this season in order to collect a high draft pick. His supplemental plan is to develop Michael Carter-Williams, maybe Nerlens Noel (but probably not) and collect a high draft pick from the Pelicans. The supplemental plans are working: MCW looks like a revelation, and the Pelicans do not. But at 3-0, the Sixers are on the wrong path to awful. Fifteen wins might be the upper limit of what it takes to get the league's worst record and with it the best chance at a top-3 pick. Philadelphia is 20 percent of the way there a week in.

But if the Sixers keep being not-terrible, there's nothing Sam Hinkie can do. From Eric Goldwein at TrueHoop:

Every game the Sixers win, though, is a major blow to their most valuable asset: their 2014 first-round pick. Keep the roster together, and they could land in the middle of the pack. That's not the ideal place to finish with the Andrew Wiggins sweepstakes looming.

Given the strength of the 2014 draft class, waving the white flag and blowing up this already blown-up team might be the best path.

Evan Turner, Spencer Hawes and Thaddeus Young are the players Goldwein suggests should be traded. But Hinkie cannot do that until the team runs head-first into a wall and sinks like a stone.

The tank can wait 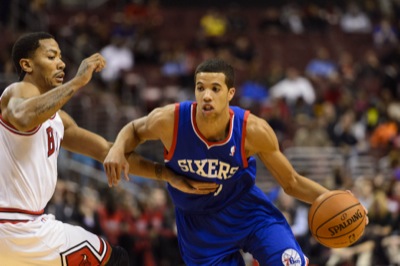 Goldwein suggests Hinkie sell high, yet he's ignoring that image actually does matter in a business like high-level sports. Hinkie already earned a rep as an unsentimental general manager when he traded the only All-Star on a 34-win team. He's not going to let emotions get in the way of his plans. But he cannot do anything like that while the team looks this much better than expected. It would send a horrible message to whichever players remain and Brown, a coach who is coaxed performance out of them all.

Players aren't dumb. They know what's going on in Philly. Turner in particular has been candid about understanding the situation. Hawes and Young get it too, without question. But MCW and Noel, they'll be here for the long haul. And by kneecapping such a positive, happy start with so much darkness ahead, Hinkie would do himself no favors with those younger guys. There's just no way Hinkie can get away with stripping this team further until it crashes back down to Earth. Doing so would be too far out-of-bounds with respect to NBA norms, even for Hinkie and even for the 2014 draft class. It would send a horrible message about the value of effort and hard work in the face of tough odds.

Steve Nash is another vet who may be traded this year. I've heard Toronto as a possible landing spot for Nash from multiple league sources.

Who in the world would even consider trading for a 39-year-old clearly falling apart before our eyes owed $19 million over two years? Add in that the Lakers have basically no assets to speak of, including near-term draft picks. The only way Nash is getting traded is if a) an NBA team acquires a time machine (money is on the Mavericks) or b) the Lakers take back a truly hideous contract in return.

One of the rumormonger websites suggests Kyle Lowry for Nash and a deep future pick. Are you kidding me? That's like Trade Machine Thomas Kinkade level work. The Lakers do generally reside within the bounds of reality. Generally.

Want a Nash trade? Steve and Ryan Kelly to Orlando for Hedo Turkoglu. And I'm still not sure the Magic would take it.

• Believing in Boogie: The maturation of DeMarcus Cousins

• Tjarks: How the new CBA ruined the Mavs