Turns out the Giants were willing to pay for all of it. And there was a sentimentality bonus, too! Suddenly, the most interesting free agent was just another guy re-signing with his current team.

Not a problem, though. Because there was a backup plan. Ubaldo Jimenez doesn't have the same résumé as Lincecum, but he's followed a similar penthouse-to-outhouse path in a remarkably short time. And right when you figured he would need to become a late-inning reliever to reclaim his relevance, he started pitching well again. Really, really well.

The renewed effectiveness did not come with a corresponding uptick in velocity, oddly enough. 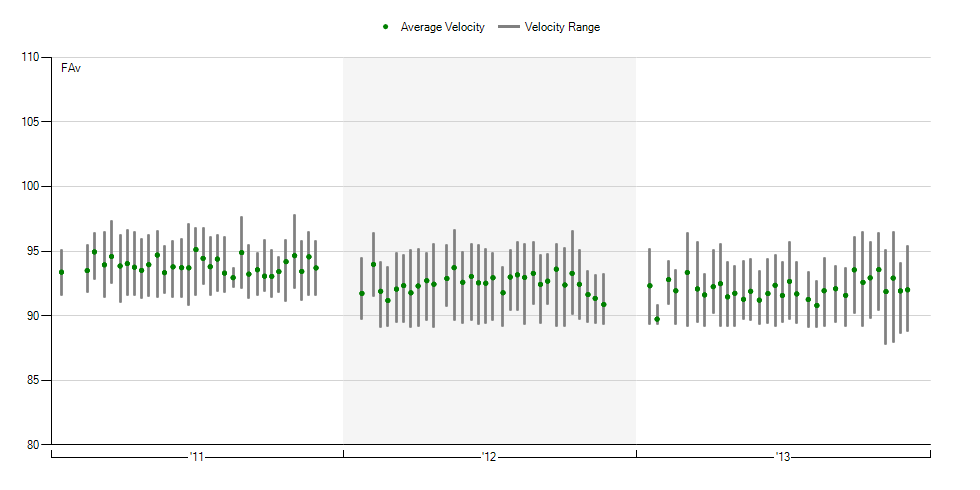 He wasn't throwing harder. He was throwing more effectively.

This made Ubaldo Jimenez the most interesting pitcher on the free-agent market. Then the Cleveland Indians made him a qualifying offer, which means that another team will have to give up a draft pick and commit more than $14.1 million to the idea of Ubaldo's second half.

That's a fancy way of saying, "Welcome back to Cleveland, Ubaldo Jimenez."

Where does Cano go?

There isn't anyone crazy enough to give Cano $300 million, right? Right?

You can understand why the Indians did it. Buying a pitcher on the free agent on the open market is expensive. Teams end up paying guaranteed money on long-term deals, even though they have few illusions that the pitchers are still going to be effective by the end of the contract. To get a pitcher worth $10 million in 2014, you have to pretend that same pitcher will be worth $15 million in 2017. If Jimenez wants to come back on a one-year deal, that minimizes the risks greatly. And if another team is desperate to beat that one-year offer, the draft pick is a nifty consolation prize.

But now think about the prospective teams who might be willing to take a gamble on a starting pitcher. There are a ton of worthwhile gambles on this market. Literally a ton if you figure the average weight is about 200 pounds for a starting pitcher. There's Roy Halladay, Phil Hughes, Scott Kazmir, Tim Hudson, Jason Hammel, Dan Haren, Johan Santana, Ricky Nolasco, A.J. Burnett, and Josh Johnson. Some of them are complete risks (Santana), whereas some are more stable and will cost more (Burnett). But if you're looking to gamble with your money on a pitcher who won't require a long-term deal, there are a lot of pitchers out there.

None of those pitchers will require the signing team to give up a draft pick, though. Just Jimenez.

Welcome back to Cleveland, Ubaldo Jimenez.

There's another possibility. The teams picking 1-10 in the 2014 amateur draft will have to give up just a second-round pick if they sign a pitcher like Jimenez. Those teams:

Dunno. Maybe the Cubs? The Mariners could take a gamble like that, as could the Blue Jays. There's probably a Denver-area car dealership that would just love to rerun the ad campaign from three years ago and save money. The Mets might spend the money. So it's not a given that teams will be scared off because of a compensatory draft pick. It's not like teams enjoy giving up second-round picks, but everyone realizes how substantial the difference is between the first and second round.

But that's a small list of potential suitors. If none of those teams are hot for Jimenez, there's a great chance he's returning to the Indians. And if you're looking for a reason other than the erratic seasons to doubt Jimenez, take a look at his hot stretch after the All-Star Break:

Or, if you replace the team name with the team's OPS+ rank out of 30 teams:

He faced some good lineups after the break. The A's and the Angels, for two. But he didn't exactly dominate against them. He feasted on the dregs of baseball in September, though, shaving his ERA more than a half-run in his last five games. The best hitters he saw after the Orioles' were the Twins'. Check out the lineup he faced in that game. Chris Parmalee hit fifth and struck out four times. He didn't have the lowest WPA in the game.

That isn't to say that Jimenez didn't legitimately improve, or that he has no chance to succeed next year. But if you're looking to commit upward of $25 million and a first-round pick, doesn't that make you just a little nervous? What if he wants Edwin Jackson money? Considering the velocity never came back. Especially when there are other interesting pitchers out there who won't cost the pick.

For more on Ubaldo and the Indians, please check out Let's Go Tribe.

• David Ortiz, Jack Morris, and the majesty of Cooperstown