In recent weeks, guys named Johnson have lit up the scoreboard. In this episode of Breaking Madden, we put every Johnson in the NFL on the same team, and we have the GIFs to prove it.

In the 21st century, guys named Johnson have left an enormous impact on the sport. 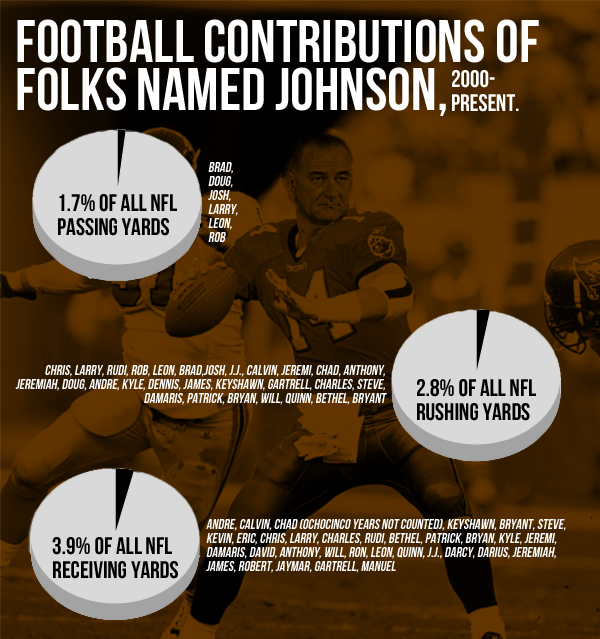 In particular, Johnsons make up a staggering percentage of the greatest wideouts in recent memory, from Andre to Chad to Keyshawn to Stevie. Above all of them stands Calvin, the greatest wide receiver in the game, and perhaps even the best in the history of the game.

Megatron possesses an almost unreal combination of size, strength, and speed. His high socks, bright blue uniform, and visor make him look like a giant electric death machine. Defensive coordinators plan half their strategies around him, but even when he finds himself in double- or triple- coverage, he finds a way to make the catch.

My question: what if an NFL general manager just started drafting every guy named Johnson that he possibly could? Frankly, it's not the worst idea I've ever heard, so we're going to give it a try. This is a two-phase experiment:

I. WE SIGN EVERY GUY NAMED JOHNSON IN THE NFL TO THE LIONS.

Including Calvin, there are 27 total Johnsons in the most recent Madden NFL 25 roster update. I placed them all on the Lions' roster, and what resulted was an odd mishmash of elite-level and replacement-level talent.

Quarterback: Josh (70/99 overall rating). Y'all remember Josh Johnson? I managed to completely forget he existed. He was the only quarterback Johnson available, and he hasn't thrown a regular-season pass in two years. We're off to a rough start here, but Josh really ought to benefit from ...

Running back: Chris (85). His Madden abilities have regressed, just as his real-world performance has, but he's still a perfect 99 in speed. Speed, I'd argue, is always going to be the most important running back skill category in video game football.

Cornerbacks: Trumaine (76), Leonard (73). In this experiment, these dudes will have to line up against Brandon Marshall and Alshon Jeffery. This will probably end terribly!

Since there aren't any active punters or kickers in the NFL named Johnson, we're gonna need those too. This is what we're going to do about that:

There were still 19 roster spots that needed filling. As usual, I found the rest of my dudes and ladies on Twitter.

if you would like to be in the next Breaking Madden, tell me how you would live your life differently if your last name was Johnson

Since y'all on Twitter, like me, are unskilled laymen, I just went ahead and gave you all my height and weight (5'11", 185 pounds). You're also a 15 overall in every category -- speed, strength, catching, blocking, the works. My feeling is that those ratings best reflect the average person's abilities on an NFL field.

In the end, I settled on the following 19 folks, whose responses fell into one of five categories.

These people were bettered by their new name. 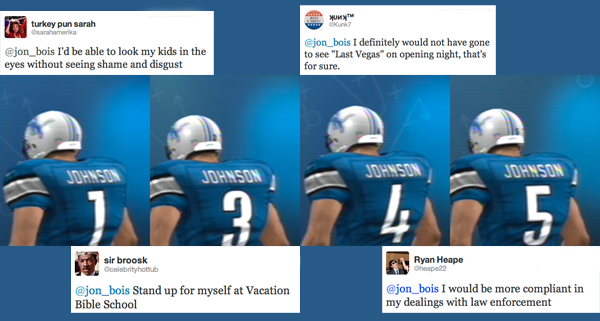 Condolences, Celebrity Hot Johnson. "Vacation Bible School" is perhaps the cruelest misuse of "vacation" in our lexicon. When I become a wealthy blog-baron, I'm going to fly cargo planes over towns each summer and dump literature that reads, "do not go to Vacation Bible School. It is church, with school hours, in the summer. I am in a giant plane!" 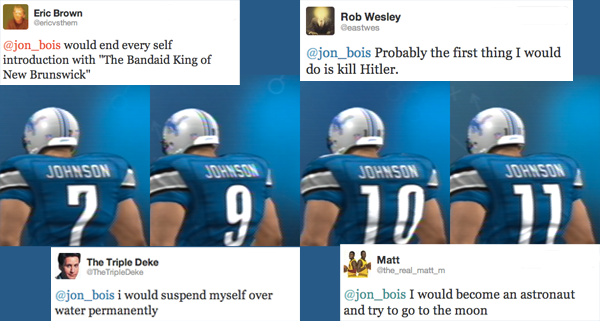 Fun fact, Rob: all people named Johnsons are time travelers. Most of them choose to hang out in the 21st-century wide-receiving industry, because it's the only cubbyhole of the human experience, throughout the vast expanse of time, in which you can make a "throw the flag" motion and a guy will sometimes stand around and throw a yellow rag. That might not seem important to you, but then again,you're a pitiful being lashed to the constraints of conventional time who will never, ever, ever know what 2150 will be like. Smell you later, millennials. 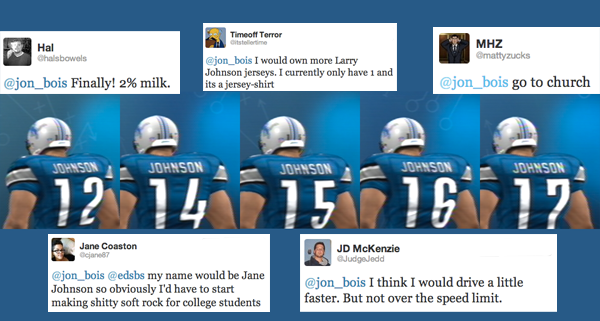 Larry Johnson was perfectly emblematic of the Chiefs circa 2005-2009, in that he was completely unlikable. Honestly, 2013 is the first year the Chiefs have been remotely likable in nearly a decade. Between him, Scott Pioli, Todd Haley, et al., they were a bad team full of total assholes for a very long time, and rooting for them wasn't healthy for me.

As for the jersey: the ketchup-red works on the football field, but is thoroughly unwearable and makes you look like Ronald McDonald in real life. 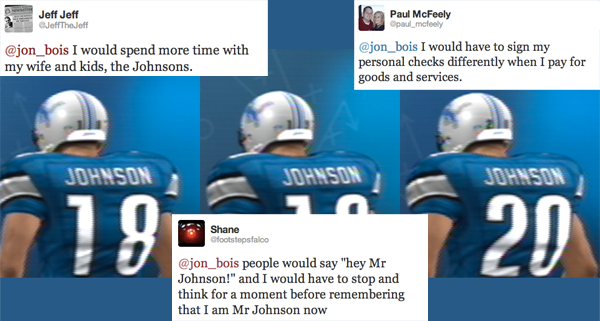 I put these folks on the team because I found their statements to be accurate and well-considered.

THE PEOPLE WHO ARE ACTUALLY REALLY CALLED JOHNSON. 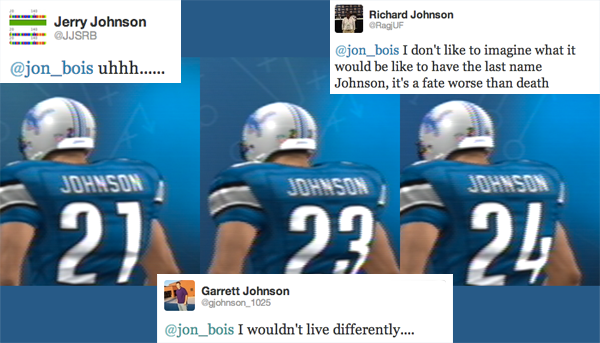 Special thanks to the largest Breaking Madden ensemble cast ever assembled, and to all y'all who applied for inclusion. While making these players, I spent so much time looking at the word "Johnson" that the silent "h" actually started looking weird and out of place. Mission accomplished.

For this experiment, I made sure to eliminate all funny business with the game sliders. The fictional Johnsons were designed as realistically as possible, and the abilities of the pre-existing NFL players were left completely unchanged.

I played as the Lions, and my rooting interests were as strong as they've ever been in Breaking Madden. If these Johnsons could win a game in a normal simulation environment, it could revolutionize our understanding of draft strategy.

Here's something to understand about Josh Johnson: he is fast as all hell. On the second play of the game, the pocket collapsed, and I took off and ran with him for a 42-yard gain.

With a speed rating of 88, he might actually be the fastest quarterback in Madden. I was actually yelling at the screen during this run -- which I never do -- because of what it meant. If I could do nonsense like this on the first drive of the game, I might be on my way to a rout, and the Johnson ramifications would be profound.

The opening drive ended with a Chris Johnson touchdown. I declined to go for two, because I forgot who my kicker was.

That is what a 15/99 kicking rating looks like. I have no idea how a healthy human adult could be that ineffective. A couple of Bears defenders manage to tip it while it's on its way down. There have been hundreds of players named Johnson in NFL history, and only one -- Norm Johnson, who retired in 1999 -- was a kicker.

The Johnson deficit had never been more glaring. This meant no field goal attempts, no extra-point attempts, no punts, and kickoffs that went 20 yards. I was going to have to concede the battle of field position, and convert as many fourth downs as I could.

David was not very fast at all, but I still found him open plenty of times. In my experience, most video game tight ends are more valuable than their real-life counterparts, and have been for the last decade. It was true in NFL 2K3 and Madden 09, and it's true here, as well. The AI, for whatever reason, just tends to let a tight end get lost while running a slant or out route. Not coincidentally, Tony Gonzalez might be the most money receiver in the history of video game football.

A passing game can only be so good without an established running game, though. Let's check in and see how he--

OH NO. OH GOD. Yep, that's eight guys, or 15 percent of the Bears' active roster, coming in to destroy Chris Johnson. This GIF sufficiently demonstrates how, exactly, something this terrible could have happened.

Eric and Hal Johnson. Twitter.com users, valued Internet subscribers, and God-awful offensive linemen. The Bears' Stephen Paea effortlessly brushes Eric aside and evades the inattentive Hal entirely. At quarterback, Josh could at least chuck the ball away when his line collapsed, but Chris had no such outs.

I didn't want this at all. I wanted this to be a story of, among other things, Chris Johnson's redemption. He lost whatever made him electrifying early in his career, and I wanted to bring it back again. It really wasn't his fault. I wasn't able to give him a competent offensive line, and he was fed to the dogs because of it. Christopher, I am so sorry.

Time to check in on the defensive side of the ball!

Aw come on, isn't that a block in the back? Is it a block in the back if you physically turn your blocker around and shove him? Perhaps this game is a big long foul against the notions of sportsmanship, aesthetics, and human decency, and at the end of the game, the officials are gonna wheel out a giant organ with whistles instead of pipes and bang away on the keys for an hour. They really ought to, because this was disgusting.

And the thing is, I can't lay all the blame at the feet of the fictional Twitter-Johnsons. The actual NFL Johnsons didn't look so great, either.

Once again, I want to stress that I did not fool around with any of the game settings or player ratings. That's just Johnson football, through and through. My defense was completely outmatched, and I rejoiced over the two or three times I actually made the Bears punt.

One moment stands out to me as particularly beautiful. With seconds to go in the first half, we were getting our asses kicked, 24-6. With the ball and no timeouts, we were doing all we could to march down the field and cut into the lead.

Josh completed to Andre just shy of midfield. We hurried to the line and got the snap off with two seconds left. The pocket, as it always did, completely disintegrated. I scrambled in the pocket with Josh, and at the last possible second, I blindly chucked it to Megatron.

There was daylight to the end zone, save for one guy. Calvin lowered his shoulders, barreled the dude over, and willed his way just inside the marker for the touchdown.

It was 24-12, and all of a sudden, it looked like the Grand Johnson Experiment might have a chance of succeeding.

It was just too much. Without a running game worth paying attention to, the passing game suffered terribly. My complete inability to kick or punt gave Chicago a short field every time, putting an undue burden on my slapdash defensive unit.

I blame my own impatience for those interceptions. I should have called more shallow slants and curl routes for Calvin, Andre and Stevie, but as the Bears' lead grew larger, I was determined to force Josh to throw beyond his abilities, and medium-to-deep throws were picked off with embarrassing ease. I tried to run a few read-option runs with Josh, but the Bears sniffed it out and dropped us for a loss every time.

That's about a yard and a half per carry. I wanted so badly to bust him loose for one big run, but to my own sorrow, I eventually had to abandon the ground game.

No idea how Nico, a linebacker, was ever slotted as a receiver to begin with.

51 to 18. God, what a grody score. I feel like a 51-14 defeat would look more respectable, because 14 is at least number of unassuming competence. The permutations behind a football score don't really produce a number so much as they paint a picture. 13 points? Eh. 14? Oh cool, a couple of touchdowns. 15? What the Hell is that? And if you've scored 18 points, you've either kicked six field goals or can't hit an extra point to save your life.

Because damn it, it was important, and he deserved it:

Music: "Put Your Name On It," Kelly Rowland

For more video game football catastrophes, check out our other episodes of Breaking Madden.