The Knicks' frontcourt is a tire fire that just got worse

With Tyson Chandler going down, the Knicks' big man woes went from bad to horrifyingly bad.

Share All sharing options for: The Knicks' frontcourt is a tire fire that just got worse

These are facts about the New York Knicks' frontcourt.

1. Amar'e Stoudemire can only play limited minutes due to health. The team has elected to platoon Stoudemire and 35-year-old Kenyon Martin at backup power forward. Stoudemire makes $21.6 million. Martin is on a veteran's minimum contract.

3. Tyson Chandler is the team's starting center. He's the only current plus defender among all frontcourt options for the Knicks. He does not have the cleanest injury history sheet. He makes $14.1 million.

4. Cole Aldrich is the only other true big man on the roster. He is a fringe NBA player, even as a 7-footer.

5. The Knicks had their most successful season in ages last year with Carmelo Anthony playing power forward in a small lineup.

With just about $50 million in true big men, you would think that the team could cope with the starting center going down with a knee injury during one game against a team with a .202 winning percentage over the past two seasons. Oh, and said team was missing its best frontcourt player, Al Jefferson.

Chandler sprained his knee (or worse) midway through the first quarter on Tuesday as the Knicks hosted the Bobcats. It was Stoudemire's night to play, but he was limited by the medical staff to 10 minutes. Martin was scheduled to have the night off, but dressed. Aldrich was left inactive. That already sounds like a tire fire.

[Bargnani] was repeatedly slow to get back in transition defense and a total nothing on offense. A technicolor disaster.

Bargnani played 18 minutes in that first half and grabbed exactly zero rebounds. He was repeatedly slow to get back in transition defense and a total nothing on offense. A technicolor disaster. Amar'e played five of his allotted 10 minutes and did basically nothing of note. So Woody had a choice: go small with 'Melo at power forward and try to outscore Charlotte, or stay big and tall.

He ran out Bargnani and the not-even-supposed-to-be-here-today Martin. Bargs lasted four minutes before getting yanked for the rest of the game. Martin is the second best true big man on the roster; he is, again, 35 and was available for the veteran's minimum. There might be 20 end-of-the-bench NBA bigs who would be an upgrade for this team, including Aldrich, who should barred from the inactive list until Chandler returns. Martin picked up four fouls and zero defensive rebounds in his unexpected 18 second-half minutes. Charlotte shot a brutal 3-of-19 in the third (Martin was a big part of that), but maintained a six-point lead largely due to work at the free throw line (13 FTs) and on the offensive glass (five in 13 opportunities).

If Chandler misses appreciable time, Woodson either has to revert to 'Melo-at-PF smallball or find a genie to grant him a wish that gives the 7-foot Bargnani an ability to rebound at a level better than a 5'11 guard. No, really: there are four players listed at 5'11 or shorter who have played at least 50 minutes this season. Bargnani's current 5.5 percent rebound rate is lower or equal to the rebound rates of three of those guards. On Tuesday, Woodson chose the worst of all worlds: a big, plodding lineup that struggled to defend, couldn't rebound and didn't score. What a nightmare. Remember when just about everyone who doesn't root for the Knicks laugh maniacally when New York traded for Bargnani? This is why.

I'm having second thoughts about being so sure that Carmelo Anthony is staying in New York this July.

LeBron James registered his 500th consecutive game with 10 points or more on Tuesday. He's the fifth player to ever do it. Michael Jordan has the longest streak ever with 866 games. Kobe's never hit the mark. Per Basketball-Reference.com, the only other player with a triple-digit streak is, of course, Kevin Durant, who scored 10 or more in 327 straight games. The next longest active streak behind LeBron and KD: David Lee at 80. The gulf proves that this feat, though ultimately a piece of trivia, is a seriously difficult task.

I admit it: I didn't watch any Hawks preseason. And I don't traditionally follow European basketball too closely. So imagine my surprise upon enjoying Hawks vs. Kings on Tuesday night when Atlanta subs in ... 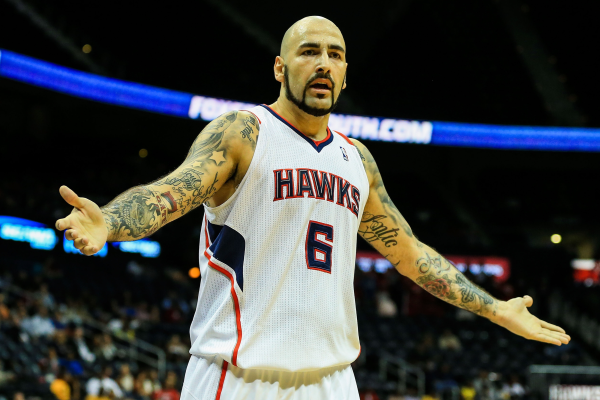 Pero Antic, walking nightmare fuel. We need a closer inspection of his tattoos, but he just might be more terrifying than Nikola Pekovic. (I really hope Pek doesn't read this.) There's something about the 21st-century Hawks that causes them to sign players you would definitely avoid screening in a pick-up game (Antic, Ivan Johnson, Jerry Stackhouse). I credit/blame Killer Mike.

• The secret to Philly's surprising success

Tyson Chandler to return from injured leg against Bucks