There were a lot of great results. People swinging at balls over their heads, bats flying into the stands, Norichika Aoki pirouetting into the visiting dugout ... it was fascinating.

But as the pictures kept coming, something became clear: A-Rod's strikeout face is one of the greatest I've ever scouted. A pure 80 strikeout face.  For every stupid strikeout face that anyone else made, Alex Rodriguez made three.

The other part is that A-Rod makes a lot of stupid strikeout faces.

Here are a few, with suggested titles. 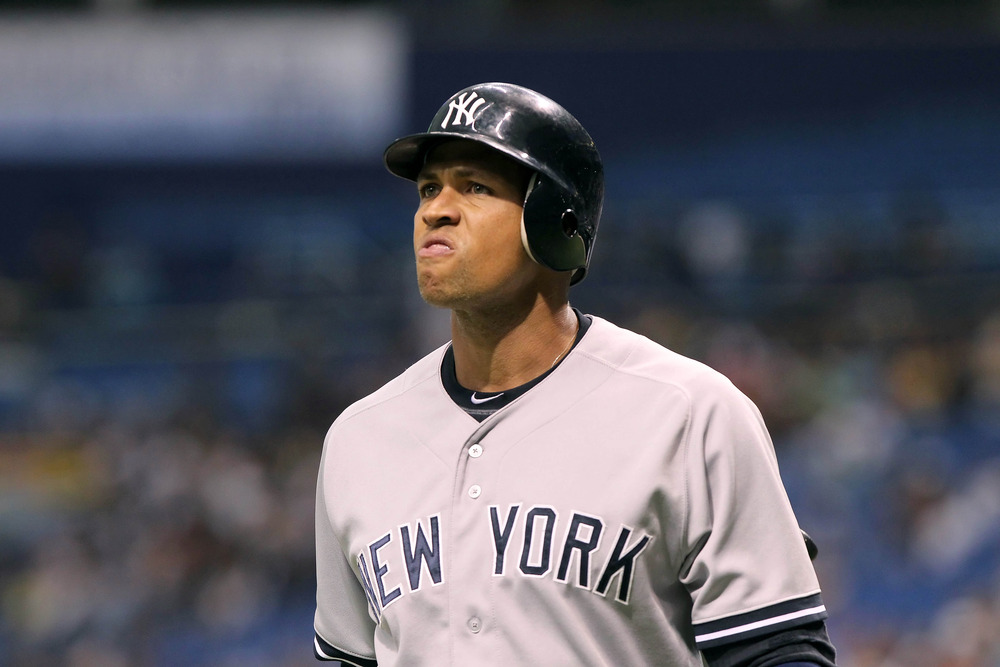 I'm pretty sure if you panned back, Rodriguez would be pointed directly at the pitcher while making this face. Can we get a ... no? Okay, we don't have that point of view. 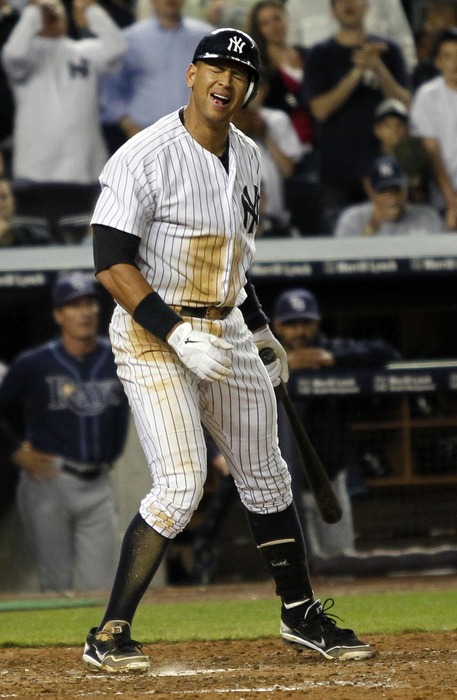 What's your karaoke song? I'm partial to "Space Oddity" by David Bowie because after a few drinks, I think I sound like him. But there's something to be said for a good "Runnin' With the Devil" to get the juices flowing.

You might think Rodriguez has a favorite song like that, and that he's singing "What a Fool Believes" or something else with falsetto notes. "More Than a Feeling," maybe. But you're wrong. You know what A-Rod sings at karaoke? A song that he had never heard before last week, when he walked into a room with five people singing along at the top of their lungs. It doesn't matter if it's Garth Brooks's "Rodeo" or Manowar's "Warriors of the World United."

One week later, that's A-Rod's jam, and he's in the middle of the singalong like nothing weird happened. He's always loved that song. What?

Also, it's a trick question. He's not singing. He's making a strikeout face. He's good at those faces, man. 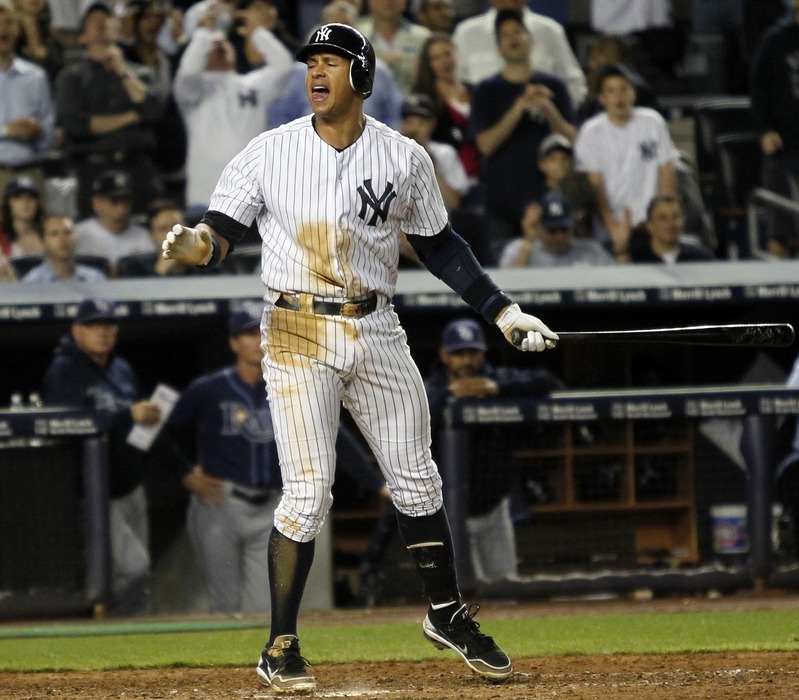 As in a precocious child on a sitcom gave him something to eat, and it was revealed to be something awful for the studio audience's amusement. Dog fur?!? Tainted clams?!? Human flesh?!? Ewwwww. Something hilarious and unexpected and grody.

Don't sleep on the reactions behind A-Rod, either. Those are the little birds that clean the teeth of the A-Rod-strikeout-face hippo. 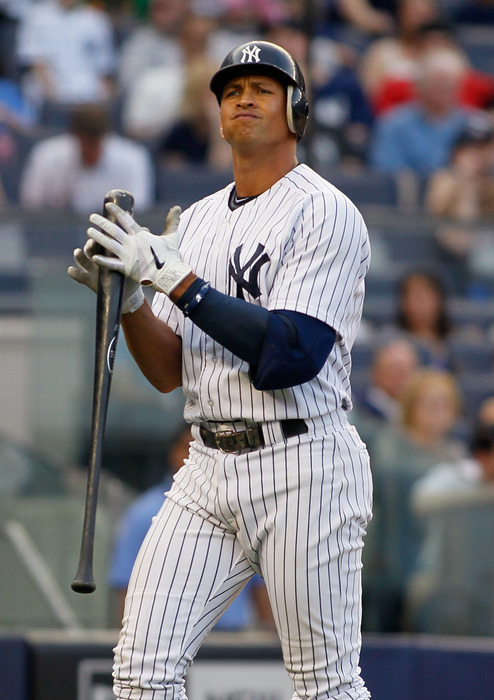 He is almost certainly looking at the pitcher in this one, too, and saying things like, "Oh, nice pitch, Clay. You have such good stuff" while clapping sarcastically.

I think A-Rod gets miscast as a villain too often. He's more of a bumbler. He doesn't mean to be malicious or disliked, but he can't get out of his own way.

In this picture, though, he's pure '80s villain. He just scored the highest score at the Summer Campathlon, and there's just no way the protagonist can beat that. 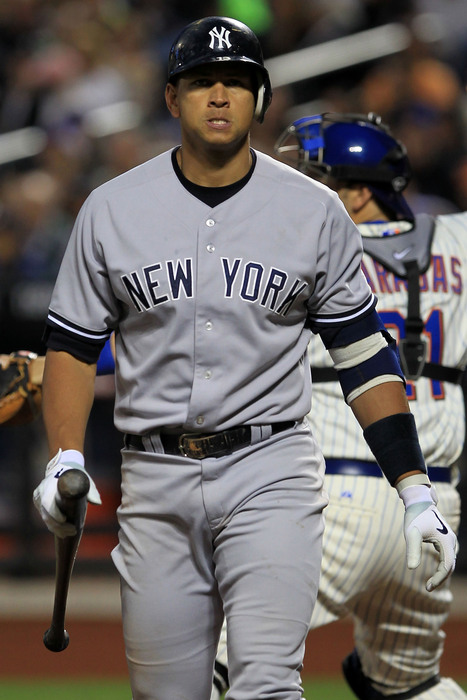 Simple, seething, pure, unfettered rage. You saw Rodriguez get into a fight with Jason Varitek, right? Did you buy it? Seemed pretty focus-group to me. Dunno, maybe that's too harsh. But it's hard to imagine A-Rod getting uncontrollably angry.

Up there, though. That's a murder face. Boy, howdy, Mr. Jason Varitek is glad that he isn't on the business end of that fella. 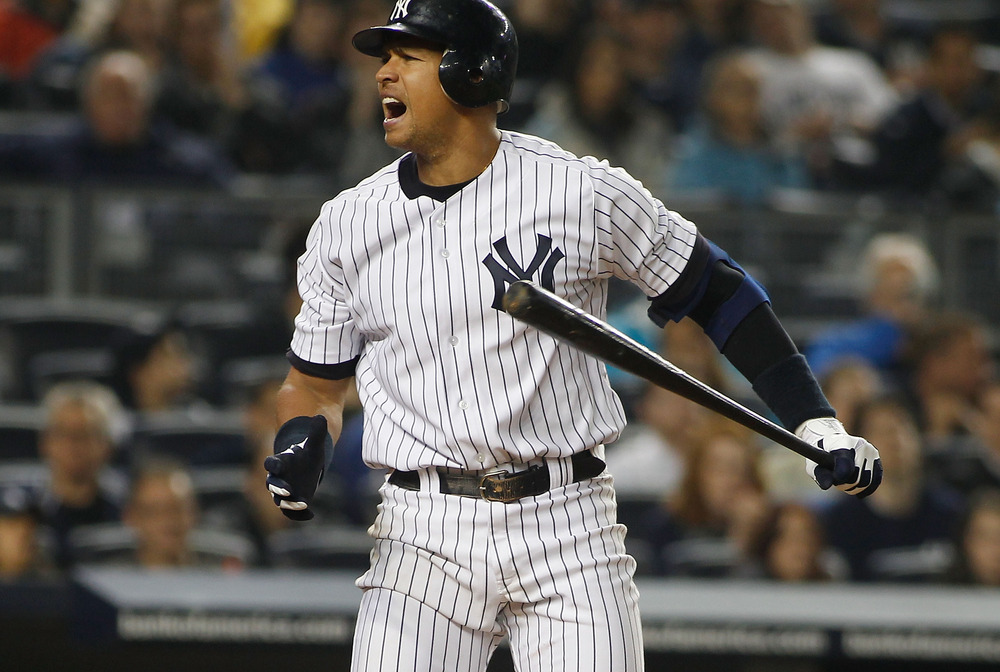 Unfettered rage's dorkier kid brother. A sample of Alex Rodriguez's Tantrum would be in the inside of every "ESPN: The Magazine" for a year, and it would make possums lurk around your mailbox for weeks after you took it out. For god's sake, don't open the sample. It will make you sterile, and that's if you're lucky. 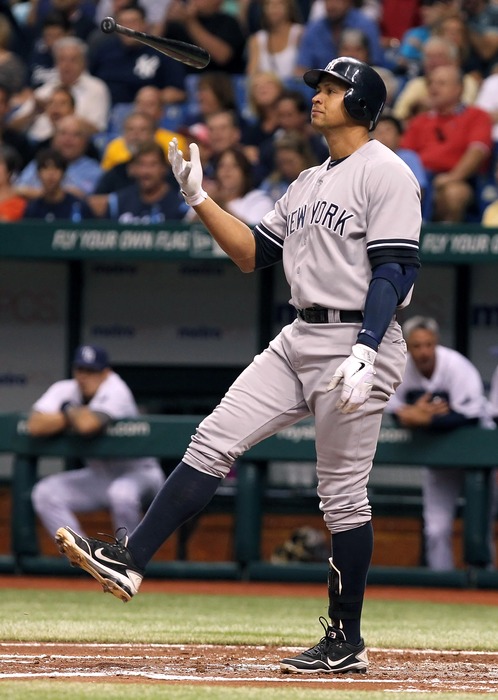 That bat looks photoshopped, right? Even though he's doing a Ministry of Silly Walks thing, it's the bat that gets me. Something about the white reflection around the perimeter of the bat that makes it look like someone dropped it in the picture in MS Paint to put on an invitation for a kid's birthday party. 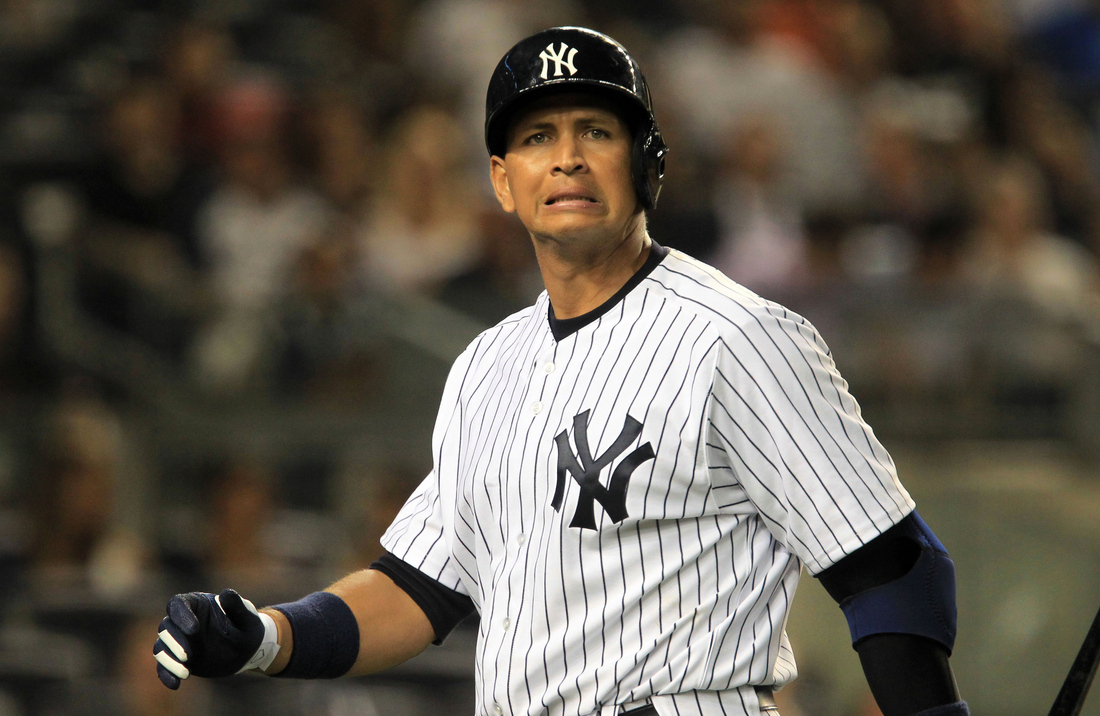 "But do I look younger?"

"Oh, god, years younger. I thought I was looking at your yearbook photo."

"They didn't get the skin too tight?"

"I don't look like a snapping turtle caught in a piece of Saran Wrap?" 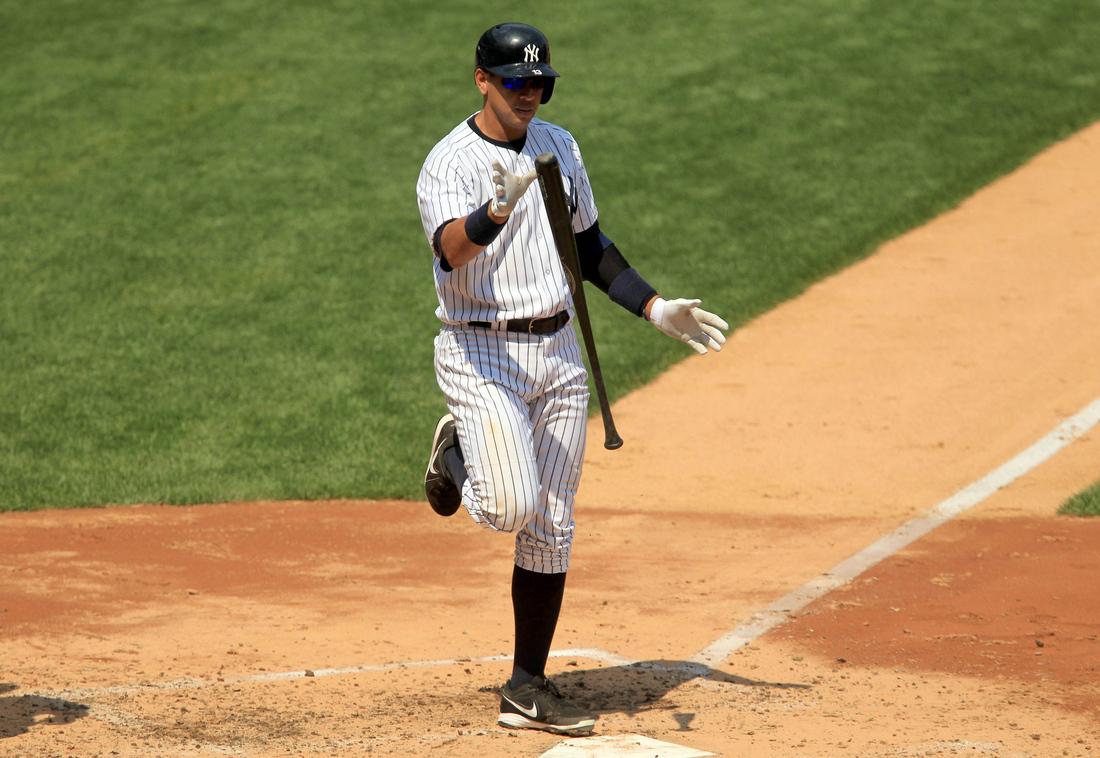 That's what A-Rod's doing, nothing more. Look at me transfer the bat from hand to hand in the air on one leg. See that? Love me. Respect me. Love me. Please. 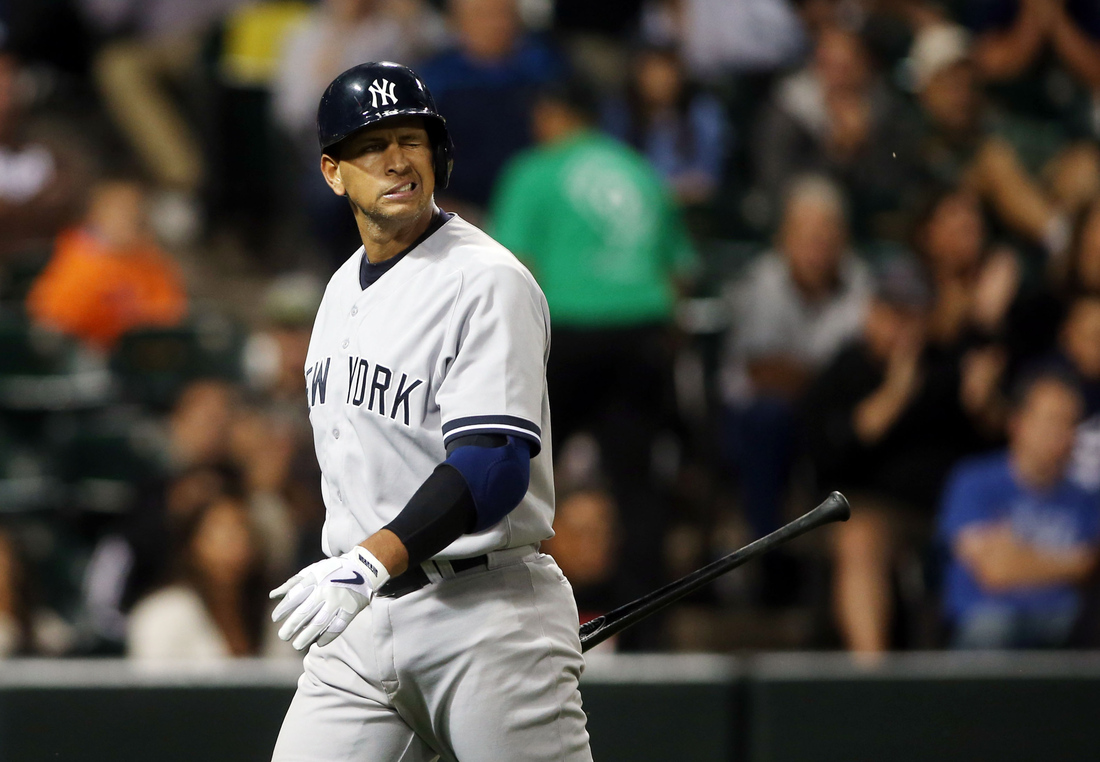