I went to Northwestern, I went to war, and I hate these uniforms.

Share All sharing options for: Authentically distressed: The problem with Northwestern's flag uniforms

1. Let's not make this about taste. One fan's tacky is another fan's cool, and anyway our opinions aren't the focus of the Under Armour uniforms that Northwestern will wear against Michigan on November 16th. That goal is attention, be it from favorable press for supporting Wounded Warrior Project or by catching the eye of teenage football players, who likely have very different taste from you, O Wizened Sports Fan.

2. U.S. Code Title 4 Chapter 8 Section (j) reads, "No part of the flag should ever be used as a costume or athletic uniform." It's hardly an edict that has been stringently followed through the years -- Section (i) says, "The flag should never be used for advertising purposes in any manner whatsoever," and that hasn't stopped Budweiser from putting the flag on its cans. Regardless, I fail to see how violating the U.S. Code for respecting the flag honors those who served the nation it represents. 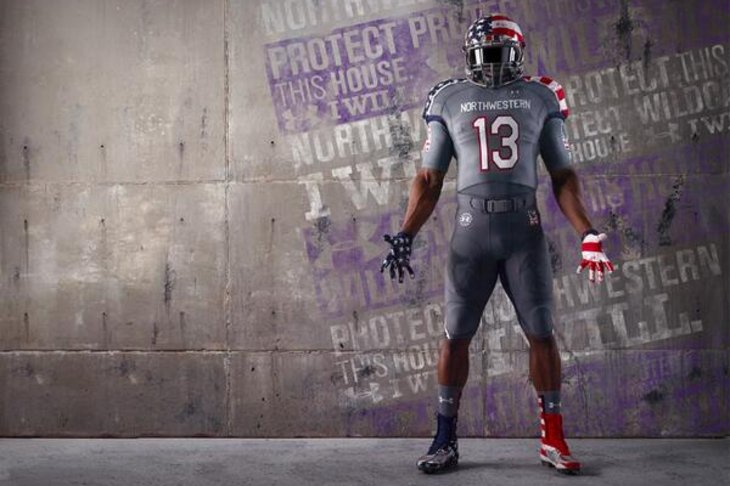 3. The uniforms look blood-spattered at first glance. At second glance, even. At all glances and most longer looks. Surely Under Armour and Northwestern aren't honoring wounded veterans with a football uniform adorned with a blood-splattered flag, right? Not after those veterans bled for their country and some of their friends came home in caskets covered in the flag?

4. No, Under Armour is not that dumb, at least not intentionally or outwardly. Upon careful inspection, the blue-and-white fields with stars are also distressed, albeit in a scratched way, rather than the red-and-white fields' splatter. There is room enough for doubt, and Under Armour and Northwestern gave nearly identical statements explaining the look:

The Northwestern University football uniforms designed by Under Armour in support of Wounded Warrior Project feature an authentic distressed pattern which depicts a flag that has flown proudly over a long period of time.

That is heartening, indeed: that these U.S. Code-violating uniforms depict not bloody flags, but distressed flags that flew for a long time. Please note that this invented theoretical flag flew PROUDLY, and the uniform's depiction of its distressed look is AUTHENTIC.

Don't tell me, with a straight face, that this is an AUTHENTIC representation of a flag.

5. I would like to debark the bullshit train to Jingotown.

You want to design gaudy football uniforms? Fine by me. You want to plaster a stylized American flag on such a uniform? That's nothing U.S. Soccer hasn't already done. You want the flag on a private university's uniform in support of people whose bodies were torn apart by hot metal in a dusty shithole while executing their nation's foreign policy? That's out of my comfort zone, but I can appreciate the charitable aspect.

But don't tell me, with a straight face, that this is somehow an AUTHENTIC representation of a flag that flew outside for an extended period of time.

Flags are made of fabric. When left in the sun and elements, they fade. They don't scratch or bleed, and Under Armour's response is the most shamelessly naked and stupid and obvious lie I've ever seen in years of reading shovelfuls of moronic PR bullshit. If you're trying to win over the blindly patriotic, the message "These colors actually DO run!" is the wrong one. 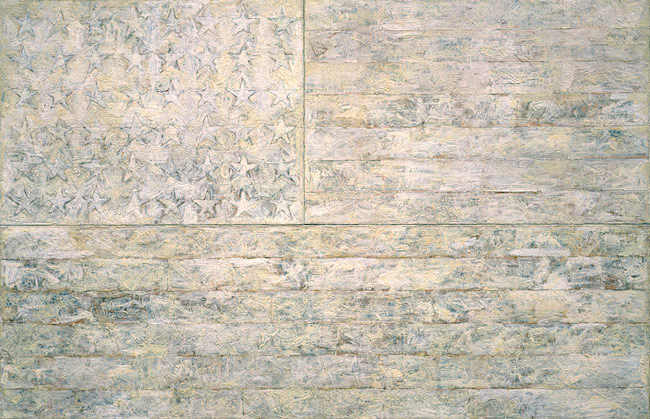 6. "The flag represents a living country and is itself considered a living thing."

This is from the same paragraph of U.S. Code quoted above, and I misread it at first. I thought of the country, not the flag, as a living thing. America: not a machine operated by the rusted gears of government, but as a living, breathing organism with a backbone of agriculture and industry, with tissues and organs of cities and national parks, with lesions and creaky joints and, yes, some cancerous cells that require surgery. It is a living thing capable of sickness, capable of bleeding, something that can die. It is, in short, something worth loving.

But the flag is not a living thing; it is a symbol, and symbols are easy shortcuts past nuance. The United States is a sprawling, diverse nation of imagination and ingenuity, where equality and hatred still grapple, where avarice and cowardice too often guide the path.

The nation is a complex organism, but the flag instills straightforward feelings throughout the world. At home, it stirs feelings of pride; elsewhere -- often where American troops have killed and been killed -- that feeling is hate.

7. Sporting events, particularly around Veterans Day, have a habit of condensing military service into an easily digestible slice of patriotism. The PA announcer says words like "heroic" and "sacrifice" without context or meaning while soldiers and sailors stand in camouflage or dress uniforms, a 38-second tribute that squeezes an emotional trigger for the audience while whitewashing the devastating effects of war -- its 500-pound bombs and rubbled buildings, its stolen sons and daughters, its impossible and unfair cruelty.

Northwestern's flag uniforms perpetuate this dishonest interpretation, and a 10 percent cut of jersey sales* to a veterans non-profit isn't enough to sell me on a lie. Putting words like HONOR, COURAGE, and DUTY in place of players' names only dilutes the meaning of words that guide an ethos for people who stand silently on a sports field between commercials so the crowd can feel something about America.

* Ten percent of Northwestern's jersey sales will go to Wounded Warrior Project. Game-worn jerseys will be auctioned off, with 100 percent of those proceeds going to WWP. To donate directly, go here.

8. Jasper Johns' White Flag isn't so much white as it is leached of color, an effect that makes it more like an old flag than Northwestern's uniforms could hope to be. The painting has a textured look, the result of layers of torn newsprint, rags, and paper laid on the canvas and bound to it with beeswax. It is monochromatic only in the broadest sense of the word. It is translucent in places, opaque in others, and there appear to be hints of red and blue throughout -- or perhaps that's just a mental imprint programmed by expectation.

It is not simple. There is no clear interpretation. And I'd like to believe that's the point.