Does 'tanking' really cause NBA fans to turn away?

Does excessive tanking/rebuilding really turn off a lot of fans? The more important question is, which fans? Also: maybe, just maybe, we're making a little too much out of five good Monta Ellis games.

Share All sharing options for: Does 'tanking' really cause NBA fans to turn away?

If the NBA is to have a problem with so-called tanking, the problem is in its potential damage to revenue via alienating fans, hurting gate receipts and killing ratings. But even this needs to be broken down.

The NBA really has two markets. There's the general population, who will watch Christmas games and the playoffs, stick on a TNT or ESPN while surfing channels, and maybe buy some tickets or merch every now and then. (These fans also may root for the Lakers, Knicks or Heat.) Then there's the hardcore team fan who might have season tickets or at least attend some games, almost certainly has merch, watches every game and comments on the Internet.

Rebuilding puts that second market at some risk, though it's pretty clear that most, if not all teams have a paying customer baseline that won't get undercut in even the most extreme circumstances. (The Kings, for example, drew at 80 percent of capacity last season, despite everything.) In addition, much of the important local revenue like sponsorship deals, suite sales and local TV contracts cover multiple years and don't get discounted immediately when a team decides to trade down to the lottery.

But so-called tanking doesn't touch the bigger, more important market at all. Untethered, casual NBA fans who ensure that the league will easily cross the $1 billion per year barrier in its next national TV deal never have to see the Jazz. The NBA carefully manages its national schedule, making tweaks throughout the season to boost the profile of entertaining teams and to diminish the profile of bad squads. There are no Sixers on Christmas.

When a less-than-awesome team like the Lakers does make it on national TV, as they did on Thursday, the NBA can rely on the fact that parity is a hot night away. L.A.'s win over the Rockets was highly entertaining, and held attention despite being a game starring Steve Blake and Chris Kaman on one side. A competitive product is everything, and the NBA gets that more often than not. The Lakers are on national TV right now because the first game against Dwight Howard's Rockets had a built-in soap opera storyline and because the Lakers have a massive fanbase. (This second point is why the Knicks were on national TV at all through the 2000s.)

But most other national TV matchups are chosen because the league and networks believe they will be competitive. There's a reason we get Heat vs. Bulls on TNT, but not Heat vs. Bobcats. The NBA schedule is so long that finding compelling matchups and pinning them to Thursday and Friday nights and Sunday afternoons is not that difficult.

You'll get some stinkers. A couple years back, TNT has a horrible streak of late-game blowouts despite fairly even pairings. And some teams will be surprisingly bad or good once a season starts, leaving the networks to scramble. But the basics are straightforward: the league can hide its rebuilding clubs from the general public, which largely protects the single biggest source of NBA revenue. That might explain why the NBA has paid only lip service to the hyped scourge of tanking.

THE REVENGE OF MONTA BALL?

Grantland's Kirk Goldsberry used the totally unbelievable fact of Monta Ellis having two strong games out of his first five in Dallas to declare that "Ellis might be rewriting his own story and teaching basketball analysts a very important lesson in the process." Goldsberry admits that Small Sample Size Theater may be the source of this fun. I agree. So without getting into any of the other theory in Goldsberry's piece on Ellis and what is wrong with advanced metrics, and in the interest of celebrating Ellis, who is one of the most fun players in the NBA to watch when he is cooking with hot fire, let me present 14 Monta Ball Games Better Than Anything From The Revenge Of Monta.

Monta vs. the shot chart 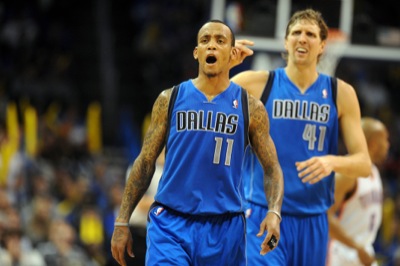 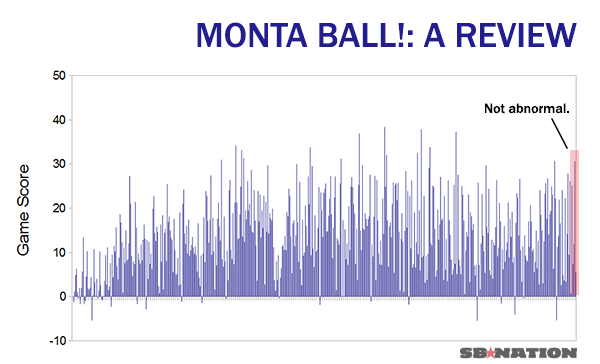 Volume scorers who shoot lots of three-pointers tend to be boom-bust types. It would appear that Monta is booming a little right now, though not outside the bounds of his normal boom standard. It does not remotely seem like Monta is a wholly different player based on five games.

The impacts of teammate quality on production and efficiency, of course, remain at the center of inquiries into data, as they have for years. I fear we have learned nothing on that matter with this superficial glimpse at one brief episode of Monta Ball.

Two tweets from Kevin Pelton that raise a huge point on a similar topic.

But the other important issue is when people go beyond what the stats justify to turn players into punchlines. Happened with Monta + Gay.

And when a player becomes a punchline, that's when it's easy to lose sight of context.

This is something that's pretty hard to avoid in the age of Twitter and instant reaction to the smallest sample sizes of all (individual plays). A huge segment of Basketball Twitter participates in this sort of activity. But it's rarely in the context of analysis or even sensible commentating. It's in the interest of laughs. Because this, basketball, is a game, and it should be entertaining. But we (myself included) often go overboard and begin setting aside real analysis of players' strengths and weaknesses.

The answer is not to withhold all jokes about Monta's shot selection or Rudy Gay's contract. It's to make sure the jokes don't color our actual analysis. We can't suck all of the fun out of the game, but we also can't be unfair to guys like Monta, who really are not nearly as bad as some people think.

• Flannery: Life in the NBA's cellar

• Ziller: Barnes, not Klay, is the Warriors' money problem