The Winter Meetings, where nothing is necessary

Share All sharing options for: The Winter Meetings, where nothing is necessary

LAKE BUENA VISTA — If you follow baseball, you will see a lot of stories filed this week from this city, which isn't one. The 2010 census lists its population as "10," which is little more than a pro forma listing of Disney employees that allows a company to become a town for the convenience of regulating -- that is to say, enjoying -- itself.

What that has to do with the Major League Baseball Winter Meetings, hailing this week from Lake Buena Vista, may not seem like much, but in a way it nicely describes the phenomenon. That town is Disney, which is where the essentially self-regulating company town of Baseball will spend this week doing the mostly unnecessary on a bedrock of something fascinating in its own right. This week, big-time baseball is the Disney experience.

If you hang around Orlando long enough, you will eventually meet everyone in the continental United States

Systemic reasons explain Orlando's magnetism. You grew up with Disney and want to bring your kids there — like more than a billion kids preceding them. Or maybe you raised your kids on Disney DVDs, and now they won't stop screaming until you can prove Pocahontas is real and, well, if Americans still read history books other than Whatever Happened to White History Month?-A Dad's Compendium to the Founding Fathers, Civil War and WWII, you wouldn't be driving 800 miles just so your toddler could pinch a girl who's just trying to pad out that acting resume before going to Broadway.

But there's a bigger systemic reason, and it is climatic. Unless you live in some of the world's more notable deserts or volcanoes, Orlando is warmer than wherever you are most of the time. When your home is cold, you want to go to Orlando, in spite of itself.

This and Florida's relative cheapness explain why your boss or HR director sends the employees to team-building exercises at some Disney facility. Or why when you want to take a class to get a certification in implanting a new hearing aid or understanding a new prescription SSRI, you register at a convention in Orlando (Disney). It was cold in January in Council Bluffs, so you skipped the Real Estate Developer's Conference in Chicago. You went, instead, to Orange County. So did baseball.

Even if you don't get to go to conventions for work, behavior at the Winter Meetings seems familiar in other ways. Plunk anyone down in a main lobby for 15 minutes, and it would remind them of Model UN, or Forensics, or an athletic or cheerleading camp in high school. Weeks before the event, everyone takes a look at the schedule and begins marking off free time in the day. Minutes after posting on a fellow sportswriter's Facebook page about attending, I received an invitation to join an already organized list of dinners out with a group of writers. It's like those calls on Thursday night, before the debate tournament, where you plan to meet up after rounds, with friends from other high schools, at this or that pizza place, then start coordinating excuses and plans to sneak out after curfew. None of which is a bad thing — then or now. I can hardly mock being added to a dinner list just minutes later when, in the interim, I'd started texting a friend about whether to hit a bar. 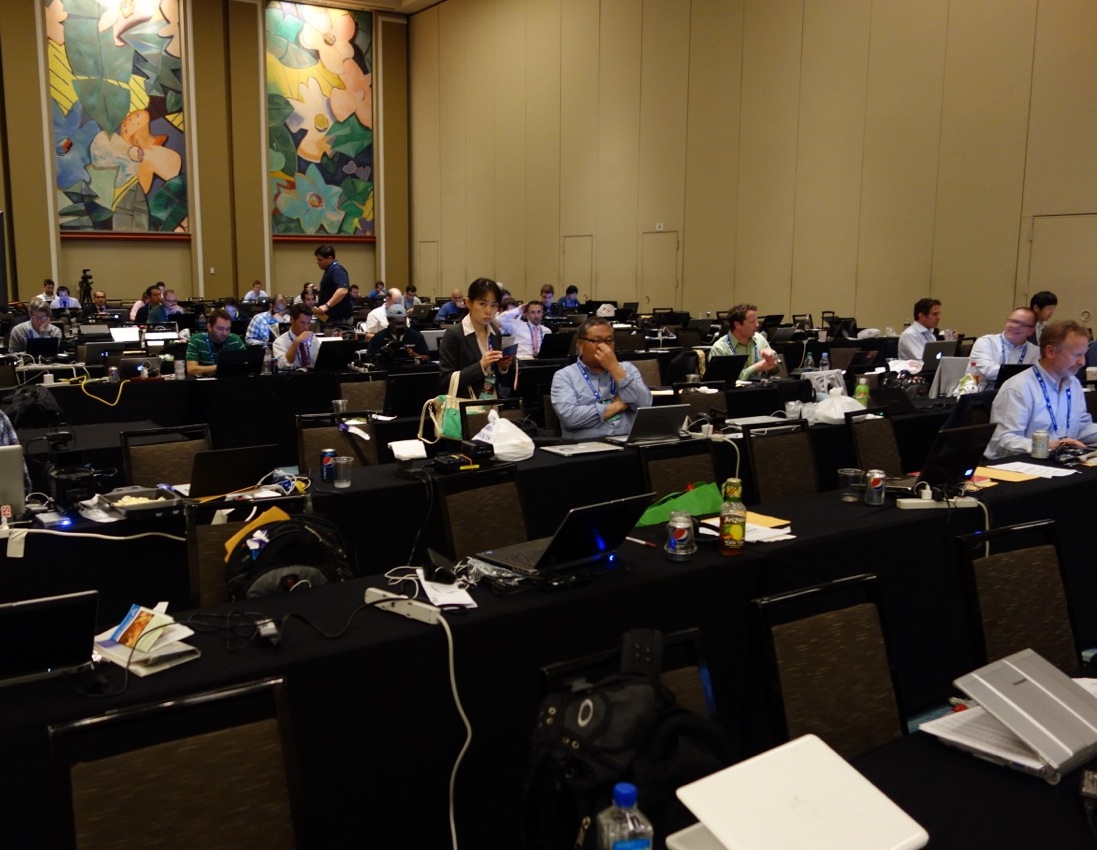 That high school reunion/get-together vibe gets more fitting the more you walk around. People high-five around every corner, psyched to see each other. One common exclamation is a stuttering laugh-greeting of, "Heh-heh-HEY, MAN!" followed by something like, "I didn't know you were coming!" Then you explain that you gotta go do this dumb shit on the schedule. "I just did that! That sucks!" Later, under drink more legally purchased and less noxious than high school fare, people will hook up — although they are sportswriters or baseball personnel, so it's hotter more in theory.

Likening baseball to organized teen or team activities may seem frivolous, but here is the great convergence of those high school and convention atmospheres at the Winter Meetings: Almost everyone, at some point, off the record, will admit to you how silly this is — neither useless nor bad, but a big production out of something not very necessary. (People say this off the record because going on the record might preclude their editors from sending them to the Winter Meetings in San Diego next year.) Granted, having a jillion people in a room for debate and rules votes is much easier than teleconferencing, but almost all the rest of this stuff can be accomplished remotely.

Consider: If you follow the Hot Stove, you know that the sexiest free agent on the market, Robinson Cano, was recently acquired by Seattle while a solid piece of local reporting uncovered the fundamental dysfunction of the Mariners front office. The fact that a massively important signing like Cano's can take place without everyone mingling in a convention center under the aegis of The Mouse tells you exactly how the rest of winter free agency can play out: at home, without fanfare. Ceremonial retirements like Roy Halladay's — which likewise happen at home, often — can happen again there too. The expansion era committee's simultaneous election of Joe Torre, Tony La Russa and Bobby Cox, and snubbing of Marvin Miller could have been accomplished remotely, just like every other bit of total horseshit that gets flung out of the Baseball Hall of Fame.

The other boots-on-the-ground at the Winter Meetings belong to writers, but they only prove that if you make any event large enough, the press has to cover it. That recent Seattle front-office-dysfunction article shows the levels of insight that can be found by staying at home, while the lion's share of Winter Meetings coverage devolves necessarily to being about the Winter Meetings themselves as a thing. Reports about who's talking to whom can be filed back home by working the phones, but mentioning that you saw Clint Hurdle nursing a tallboy in the lobby or asked Ben Cherington about a trade (no comment) when you ran into him near the room where he was peeing just now (NO COMMENT) makes it seem more real.

Which is not to say that people aren't doing real work or lack for sincerity. Like instructors or team-builders at conventions or that save-the-world guy in debate club, there are people seriously committed to the process because they believe in it for its own sake. The TV guys all seem properly agitated about killing it each day. The major print writers work the phones and want to get the scoops and give off that whiff of doom-fear that emanates from big writers at big events waiting on a big reveal. All these guys also seem profoundly aware that they're doing it because people are watching or reading — that you are sitting in an office refreshing ESPN Insider, looking for scoops more granular and prone to divination than Nikki Finke reading entrails.

That we come for that drama — that we refresh for it and travel for it and trudge up and down hotel halls for it — is also its own pity in a way, one underscored even by the location. Because those pageloads and palace intrigue vastly overshadow the two things that actually run the Winter Meetings and for which they were created: the minor leagues and the unseen economies of baseball. The weird irony of the Winter Meetings is that everything that we think it's all about could be accomplished elsewhere, while the purpose that undergirds and requires its being a physical event held in one place is off the average fan's radar. 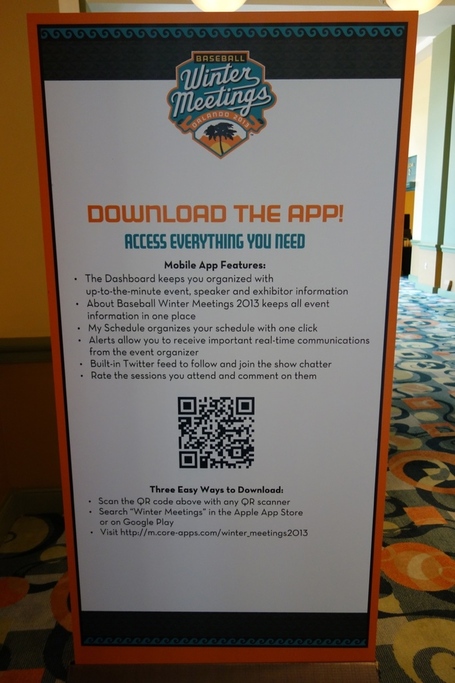 There are more than 3,000 people here this week. Many of them are selling baseball-related products — everything from bats to concessions to weird things there isn't even space for here — or buying them, creating a vast sales market that is as much the heart of baseball as nine dudes on the field. Roughly 500 of those 3,000 are job seekers, terrified-looking twentysomethings bearing legal folders full of resumes before them, waiting on scheduled job interviews while hoping to bump into Andrew Friedman, win him over with a smile and take that first step on the fast track to president of Baseball Operations. Many of them are doomed, but some of these guys in too-small shoes and girls in too-cocktaily dresses will become the people you read about 20 years hence.

All of which makes that LAKE BUENA VISTA dateline fully satisfying each time. Walt built Disney World atop the bulldozing and landfilling of orchards, ranches and farmland, then dredged his own lakes and made his own version of nature, finally incorporating it in a fake town made of his own executives. Ground on which a foundation is all but blotted out to make way for over-earnest, over-hyped and not strictly necessary monopoly designed to extract $8 from you for a hot dog is a pretty good one to stand on.

• Roy Halladay: Pitcher of the century

• The best remaining free agents in a post-Cano world