Why are some teams better at executing out-of-bounds plays coming out of a timeout than others. Our newest contributor explains the concept of "ATO" and how teams practice these plays.

Share All sharing options for: 'ATO' geniuses: Breaking down why some teams execute great out-of-bounds plays

Editor's Note: Doug Eberhardt is a coach and skill development trainer that has worked with Mike D'Antoni and Lionel Hollins, among others. This is the debut of a weekly feature he will do for SBNation.com during the season. You can follow him on Twitter at @ebehoops.

The NBA has its own language? Who knew?

Yes, if you're a coach, video coordinator or a member of the basketball operations staff of an NBA team, the league has a full dictionary of insider words, acronyms and turns of phrase. Much of this extensive glossary is common throughout the Association. However, like the General Assembly at the United Nations, each team also speaks their own distinct language.

Go from one team to another, and it's like learning a brand new language. Or, at least a different dialect. If only there was the equivalent of Esperanto for the NBA.

We'll try our best in this space for the rest of the season. We'll explain a new word or phrase each week, look at teams who do it well or poorly and go from there. Suggestions are welcome.

What is an "ATO?" The acronym, which stands for "after time out," refers to an opportunity to run an offensive set or action -- depending on your team's vocabulary -- in the front court out of a dead ball, timeout situation. During end of game situations (in the last two minutes of regulation and all of overtime), the sideline ATO usually comes after the team chooses to automatically advance the ball into the frontcourt.

How Damian Lillard has developed into a decent NBA defender.

How Monta beat the Blazers

Breaking down Lillard's D How Monta beat the Blazers

The majority of NBA ATO plays come from a sideline out of bounds, which is a function of NBA rules. The only time NBA teams get to inbound from the baseline is when the ball is put out of play along the baseline. (Or, if the ball hits the basket support or there is a throw-in violation, etc. I bet you didn't know NBA rules were so fun!). Some teams, the San Antonio Spurs being the prime example, work on ATO, end of game, and need-a 3 situations every practice or shootaround. We're talking a solid 10-15 minutes every practice. In the NBA, where the grind of games never stops, that is very valuable time.

Other teams will practice each ATO a couple of times per season, but they are already based on actions that they have in their existing offenses. In my experience, the best "ATO's" are based on what your team does well, not the opponent. Who is hot might come into play, and you may change the action if you have an exceptionally good matchup. But teams successful at executing ATO plays usually are ones that create sets based on what they already excel at doing.

Like most in-game adjustments that coaches make throughout the 48 minutes, late game ATO situations are tweaked based on what's happened earlier in the game. A coach will usually have a roster of 15-20 actions at his disposal before the game. Some coaches have them neatly typed on team templates. Others have them printed out on index cards, like so many of Grandma's recipes. My favorite coach is a master of using a yellow legal pad, with killer ATO's sketched out in free hand.

With all of the video and advance work that opposition teams use to prepare their defenses, you need at least 4 or 5 variations of the same ATO setup. Sell the same look the opposition already knows, but run it slightly differently so a different player gets the ball. Result: ATO genius!

How tough is it to draw up a set/action in a small amount of time? Consider that a coach must anticipate how the defense will match up, how it will play screens and what (or who) it will try and take away. So, it's a rhetorical question, kids. It is very tough.

The best teams use an "ATO" to set-up a creative, team-oriented play

The best NBA offenses are designed to make the defense have to make a decision on every possession. An "ATO" must be designed in such a way to increase the pressure on the defense, to take away any advantage that the defense gains from being set coming out of a dead ball situation. Depending on the time and situation, the "ATO" should include counter actions -- backup plays, so to speak -- that allow the offense to adjust on the fly and still produce a quality look.

It is true that some teams, depending on the time and situation, simply use an ATO as an opportunity to inbound the ball and clear out or go to the inevitable star player isolation. However, the best teams use an ATO to set-up a creative, team-oriented play that could lead to any of the five players getting an opportunity to be the one who takes the shot. This model is more visually pleasing, but more importantly, it usually leads to a positive scoring opportunity.

One of the go-to clichés for any color analyst looking at a late game "ATO" is "the man inbounding the ball is the most dangerous player on the floor."

In this week's example, the cliché is correct. Alert Doug Collins. Portland chooses to take the ball out on the left side of the floor, in front of the scorer's table. Immediately, this should tip off Dallas that the action will probably be for a shooter that is more comfortable going to his right.

Portland places two three-point threats (Nicolas Batum, Wes Matthews) angled on the opposite side of the floor. The Blazer's big men (LaMarcus Aldridge, Robin Lopez) set up on the opposite elbow and the low block on the same side, respectively. 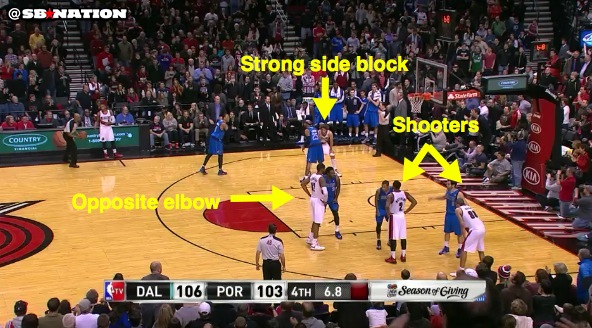 As the play starts, Batum rubs off a mini-Matthews screen curling to the three-point line. Matthews peels low looking to come off Lopez's screen. 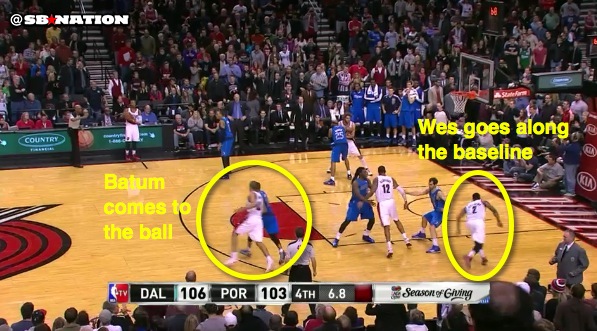 But Wes's cut is, for the most part, misdirection. It's meant to be a decoy that forces the defense to react and opens up the trigger the Blazers really want to use. It also clears out the whole right side of the floor for the Damian Lillard move(s) to come.

One problem: the pass comes a beat late, which throws off the timing of Batum's screen for "the most dangerous man on the court." 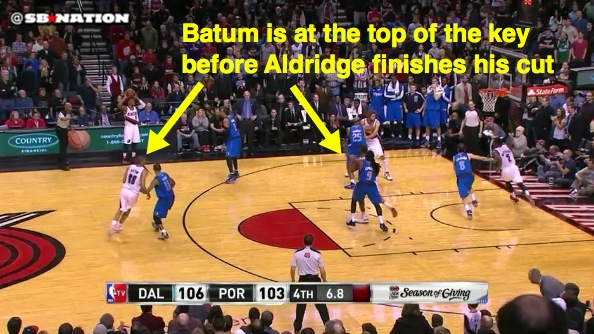 That man, Lillard, ultimately takes the great circle route cutting on to the floor from out of bounds. Ideally, his cut would be be a little bit tighter and more of a straight line. However, Batum's slight screen creates enough of a logjam that Aldridge can hit Lillard for a catch-and-shoot 3. 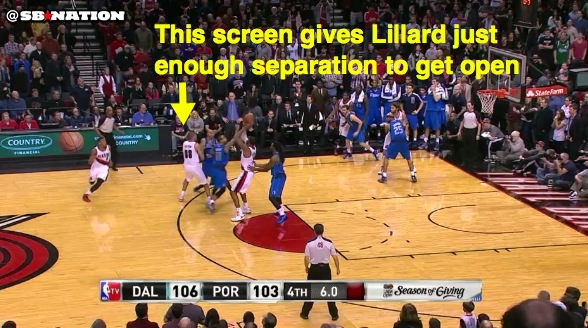 Credit Shawn Marion here for making this difficult. The Matrix recovers quickly enough that Lillard is forced to put the ball on the floor, shot fake and shoot a double-clutch 3, which is an incredibly tough shot. 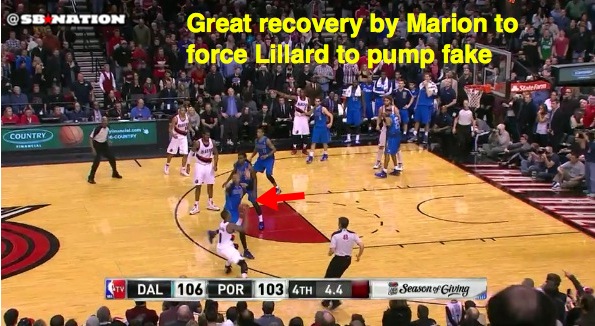 Of course, Lillard made it, which is amazing and why he's a rising star. The ATO was successful and relatively well-run, but that little bit of poor timing almost proved disastrous and turned it into a much harder finish for Portland.

If that Portland end-of-game ATO looked familiar, you either have a very good memory or you're a fan of the "Seven Seconds or Less" Phoenix Suns. Or, you're me. Like all good NBA coaches, Terry Stotts paid homage to one of his brethren and lifted that excellent set from D'Antoni. This is D'Antoni's Suns running the same action six years ago to win a game in Chicago.

In the Suns' original version of this ATO, all of the Phoenix players start on the opposite side of the floor. Steve Nash, Canada's greatest athlete (with apologies to the late Gene Kiniski), cuts high off a double or even triple-screen setup. As Nash hits the middle of the court, Leandro Barbosa hits Boris Diaw right at the Bulls logo. Barbosa makes a straight line cut off of an excellent Nash screen, Diaw hits Barbosa in stride. Barbosa catches and shoots in one motion, and Chicago chooses to go under the pick screen. Game. Set. Match.

Yes, there is a time difference and a score difference in these two examples, but the creativity and execution are there in both video clips. Thanks to YouTube, the inbounder cliché actually ends up being true.

Well, that and a broken clock is right two times a day.