The Knicks have reportedly been considering trading a future first-round pick to rent Kyle Lowry for five months. This is not a new thing for New York.

Share All sharing options for: Everything you need to know about the Knicks' obsession with trading first-round draft picks

There are three constants in basketball: Western dominance, bad calls and the Knicks' obsession with trading first-round draft picks. Rumor has it that the Knicks have discussed a deal with the Raptors that would, in essence, swap out Kyle Lowry for New York's 2018 first-round pick. Lowry will be a free agent at the end of the season, so the Knicks would be trading a real asset for a rental to help out a 6-15 team.

(My opinion is that Lowry would be a huge shot in the arm, both with Raymond Felton injured and once he returns to action. But giving up a first-round pick that deep into the future isn't worth the payoff, which is a potential playoff berth and basically no chance at a title, the Knicks' unrealistic goal.)

It appears that the Lowry deal may be on hold as Knicks owner James Dolan (of all people) reportedly dropped a veto on it. That's surprising given that a proposed deal with a first-round pick included totally follows a pattern the Knicks have leaned on repeatedly over the past decade, no matter which of Dolan's general managers were in place. No fans know the rules regarding trading draft picks better than fans of the Knicks. If Dolan does pull the plug on this deal, chances are that it's because he prefers a deal that swaps the 2018 and 2020 picks for a bigger star.

First, let's explain the rules regarding trades that include future draft picks.

The Stepien Rule -- named after a truly awful former Cavaliers owner who made Dolan look like Peter Holt -- prevents teams from trading future picks from consecutive years. For instance, a team could not right now trade both their 2014 and 2015 picks in one deal or separates unless they had another first-round pick in one of those drafts. Teams addicted to trading future picks must stagger them: 2014, 2016, 2018, for example.

NBA rules also prevent teams from trading picks more than seven years into the future. So right now, 2020 is the latest draft teams can trade picks in.

Here's the Knicks situation. They traded their 2014 first-round pick in the Carmelo Anthony deal. It will go to either the Nuggets or the Magic, depending on where the Knicks finish in the standings. It is not protected; even if the Knicks land the No. 1 pick, they are not keeping it. They also traded their 2016 first-round pick. In the 'Melo deal, they gave the Nuggets a swap option, which just means that if the Knicks were due a better pick in 2016, Denver could take that and give New York their own pick.

But then the Knicks went ahead and hilariously included that pick in the Andrea Bargnani deal this summer. If the Nuggets are better than the Knicks in 2016, they get the Knicks pick, the Raptors get the Nuggets pick and the Knicks get to watch the draft over cheese and wine.

Given where we are now, let's take a look at how these trades involving draft picks have worked out for the Knicks since 2001. First, the graphic TL;DR version followed by a winding discussion of how everyone went so, so wrong. 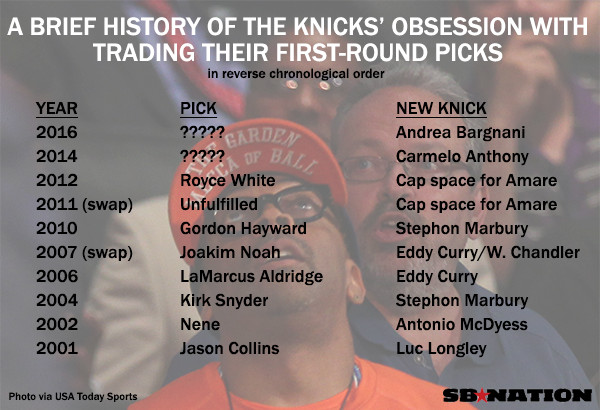 The Bargnani trade still looks like an unmitigated disaster, despite Il Mago playing decent this season. Reminder: the Knicks are 6-15. Bargnani isn't exactly putting them over the top, you know? The 'Melo deal is one I won't find fault in, though the price in players (including Danilo Gallinari) and the unprotected 2014 pick was high. 'Melo in his prime was a player worth giving up a pick to get.

The package that resulted in the Knicks losing their 2012 pick, though, was more typically Knicksian. In February 2010, the Knicks traded that 2012 first, Jordan Hill and a swap option for 2011 to get Jared Jeffries off of the books and open up cap space for the epic 2010 free agent class. It allowed the Knicks to sign Amar'e Stoudemire and Raymond Felton. Awesome. The Knicks' 2012 pick ended up being Royce White, who has busted on out of the league. Honestly, there are not many players in the back half of the 2012 first-round worth missing. The 2011 swap option was declined because the Rockets picked ahead of the Knicks despite a better record on account of the West's depth.

Where'd the Knicks' 2010 first-round pick go? Good ol' Isiah Thomas traded it back in January 2004 (along with the team's 2004 pick) for ... Stephon Marbury. The 2010 pick become Gordon Hayward; Paul George was taken one pick later. The Knicks stunningly kept their own picks in 2008 (Gallinari, traded two years later) and 2009 (Jordan Hill, traded a year later).

And now we arrive at the Eddy Curry trade.

I SAID "AND NOW WE ARRIVE AT THE EDDY CURRY TRADE."

Three points of order here. First, the Eddy Curry trade, made in July 2005, was a sign-and-trade. The Knicks were paying the Bulls for the privilege of signing their restricted free agent. Second, the Bulls had no intent to actually retain Curry. He wouldn't take a test related to his heart issues, so the Knicks were basically bidding against themselves. Third, the actual contract the Knicks gave Curry became, due to his health and fitness issues, the worst contract in the league for several years, even when you strip out what else New York gave away to get him.

The trade sent Chicago a couple of players, the Knicks' unprotected 2006 first-round pick and a swap option for 2007 (plus a couple of second rounders). The swap option in 2007 gave the Bulls the No. 9 pick (Joakim Noah) and the Knicks the No. 23 pick (Wilson Chandler). The 2006 pick ended up being No. 2 overall. Chicago made a horrible draft day trade to lose it to Portland, and the pick became LaMarcus Aldridge.

So, in the Eddy Curry trade, the Knicks essentially dealt LaMarcus Aldridge and Joakim Noah for Wilson Chandler and the worst contract of the decade. This is why you don't trade unprotected future picks. This is also why you don't let Isiah Thomas run your team.

The Knicks managed to make their own 2005 pick (Channing Frye). The 2004 pick the Knicks gave up in the Starbury deal was Kirk Snyder, who didn't last long in the NBA. But Josh Smith, Tony Allen and Kevin Martin are among the players taken later in the first. The Knicks took Michael Sweetney in 2003; he was included in the Curry deal. The Knicks picked No. 7 in 2002, taking Nene. Unfortunately, the team traded him for Antonio McDyess on draft day. McDyess was coming off of a ruptured patellar tendon. He didn't play a single minute in 2002-03 and only 18 games for New York before being tossed into the Marbury deal. The Knicks had traded their 2001 in a deal for Luc Longley in 2000; the pick became Jason Collins, while Longley played 25 games for New York before retiring.

Of all of these trades involving future picks, only one -- the pick that became Royce White and the unprotected 2014 pick (plus players) for Carmelo Anthony -- seems favorable at this point. And that will change in an instant if the 2014 pick ends up being a prize. (The Knicks currently have the third-worst record in the league. DraftExpress currently has Jabari Parker slotted at No. 3.) The Jared Jeffries cap dump doesn't look too bad, except for the fact that it allowed the Knicks to sign Amar'e to a deal that looks worse and worse every day.

Every other future pick deal by the Knicks since 2001 has been somewhere between bad and unmitigated disaster. The Knicks have given up the likes of Nene, LaMarcus Aldridge, Joakim Noah, Gordon Hayward and some kid coming out in 2016 for a broken Antonio McDyess, Stephon Marbury, a broken Eddy Curry and an $11-million-a-year Andrea Bargnani.

Lowry is a really good player who fits what New York needs. But at some point, the Knicks have to break this cycle and act like a responsible team. Mortgaging the team's future assets to save a season in the tank just doesn't seem to be worth it, based on the franchise's history.