Death by mid-range jumper: Who is starving themselves by feasting on long twos?

Mid-range shots aren't worth whatever nebulous benefits they offer an offense. The Wizards and Bobcats are good examples of why.

Share All sharing options for: Death by mid-range jumper: Who is starving themselves by feasting on long twos?

SB Nation's own Mike Prada made an interesting point over the weekend as Marcin Gortat elected to complain (surprise!) about his role in the mediocre Wizards offense. The Wizards rank No. 23 in points per possession and have never been better than than bad on offense under Randy Wittman. Prada pointed out two damning stats related to that and related to Gortat: the Wizards take the most mid-range jumpers in the NBA per game, but shoot the fourth-worst percentage on them.

Mid-range jumpers have long been a topic of derision in NBA analytic circles. A few players in the league can shoot them efficiently — up around 45 percent. Most of the league shoots worse than 40 percent. Plenty of players who take a non-negligible number of mid-range shots are down around 30 percent. The further from the rim you shoot, the lower the percentage will be, holding other variables (shot defense, genesis of the shot) constant. But once you hit the three-point line, makes are worth more, so it works out that accounting for that extra point makes three-pointers almost universally more efficient than long two-pointers.

With that and the Wizards' plight in mind, here's a chart showing how frequently teams are shooting from the mid-range this season and how many of those are going in. Stats via NBA.com. 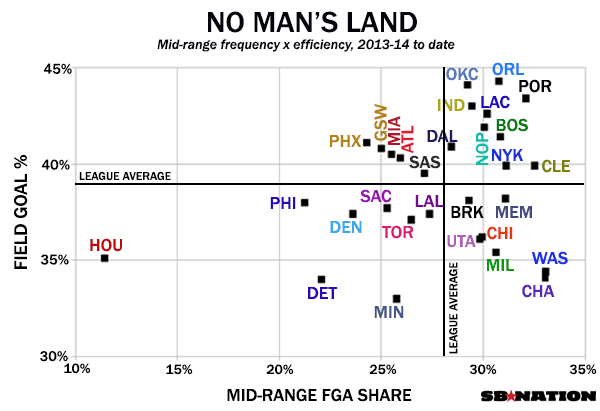 Washington is not quite in a class of its own: the Bobcats shoot mid-range jumpers at roughly the same rate as the Wizards and at roughly the same (lack of) effectiveness. The Bobcats rank No. 29 in offensive efficiency this season. Five other teams are in that gross little zone in which they take mid-range shots more frequently than league average but shoot them worse than league average: the Grizzlies (No. 20 offense), Bulls (No. 28), Bucks (No. 30), Nets (No. 21) and Jazz (No. 25). So, again: the seven teams who take lots of mid-range shots, but shot them worse than 39 percent (league average) are all in the bottom 10 in offense.

The real stunning team here is Houston: only 11 percent of the Rockets' field goal attempts are taken in the mid-range. Houston also took the fewest mid-range shots in the league last season. With James Harden feasting at the rim and beyond the arc, plus an offense now built to capitalize on Dwight Howard in the pivot, it's not necessarily a surprise that the Rockets eschew the mid-range. But there's another clue when you look at the No. 2 team in fewest mid-range shots: the Sixers.

Last season, Philadelphia was No. 1 in mid-range shots per game. In 2011-12, the Sixers were No. 2 in that category. Now only the Rockets take fewer mid-range shots. What changed, other than Jrue Holiday being replaced with Michael Carter-Williams and Tony Wroten? Well, Houston's front office No. 2 Sam Hinkie took over the Sixers and hired a like-minded coach to run the team.

The distaste of mid-range shots is a paper thing — plenty of theoretical arguments for the mid-range jumper have been made, but the math is unconvinced. Analysts like to believe that having good mid-range shooters opens the floor to slashers and post players, that taking long jumpers keeps the floor balanced and protects against doubling or packing the paint. It makes sense, but the math keeps telling us that mid-range shots don't add enough to make up for the fact that they are inefficient shots compared to other options.

Houston GM Daryl Morey and Philly's Hinkie are the most visible heavy-math GMs in the league. Their teams are at the bottom of the list in mid-range shot frequency. That's not a coincidence. It's not the only thing that matters, of course — the Rockets are No. 3 in offense, the Sixers No. 26. But at this point, it would seem plenty of teams could benefit from taking the analytic approach here and relying less on the mid-range.

• Sunday Shootaround: The Knicks are a disaster in 3 acts

• Ziller: Blake Griffin is the new target of the Knicks' insane exceptionalism

• Z-Bo on trade rumors: 'There's no loyalty in the NBA'