The Post-Mortem, Week 15: It could always be worse, Washington

Remember this guy? Sure you do. He still visits your nightmares, I bet.

Share All sharing options for: The Post-Mortem, Week 15: It could always be worse, Washington

The Ravens, the Panthers, the Chargers, the 49ers, the Cardinals and the Rams. Those are the only teams that didn't turn the ball over in Week 15, and to them we offer a lusty boo. Who are you to think you're so much better than the rest of the league? The Broncos and Seahawks are the current No. 1 seeds in their divisions, and they weren't too good for turnovers. This is supposed to be a league of parity, so get with the program.

Time of Death: Rather than kicking an extra point to tie the game with 18 seconds left, Washington went for the two point conversion and failed, and a grateful nation thanked the Redskins for making the sacrifices that saved us from overtime.

Cause of Death: Kyle Shanahan's offense turned the ball over seven times to a Falcons defense that entered this week ranked 30th in the league in takeaways with 12. In case you think this is the bottom, Washington fans, recall that the last time your team had this many turnovers, Mark Brunell and Patrick Ramsey were the quarterbacks.

Time of Death: With about three minutes left and the Bears up seven, things were grim for the Browns when they let Matt Forte run for 24 yards on third and nine. They got worse on the next play, when Michael Bush ran for 40 and a touchdown.

Cause of Death: There's a microcosm-macrocosm relationship between those two runs and where Cleveland failed overall in this game. The Browns hadn't allowed a single running back to reach even 75 yards rushing in a game this year, and only two with at least 10 carries had managed to crack 4.5 yards per rush. Matt Forte finished with 127 and 5.3.

Time of Death: Well, I suppose it was really when ole Houston defended us against that wolf. We didn't know it, but that wolf was rabid, and we just couldn't take the chance of Houston attackin' one of the youngins or Ma. So I shot ole Houston. Broke my dang heart.

Cause of Death: Let me put it this way — Trent Richardson had 102 yards from scrimmage, and, subtracting the yards he lost on sacks, Case Keenum had 132. OH GOD AND THE TEXANS HAVE TO PLAY DENVER NEXT WEEK.

Time of Death: Tom Brady got the ball back with 75 seconds, three timeouts, and 80 yards between him and Destiny. Five plays later, he had the ball at midfield. Four more and he had the Patriots in the red zone. Things stalled a bit then, and we were down to the last gasp: fourth-and-five at the 14. Only a touchdown would do. Brady reached back, found that little extra bit of greatness, and fired the ball with his trademark precision ... into the waiting arms of a Miami defender.

Cause of Death: An unusual occurrence can be the difference between victory and defeat in a close game, and the Patriots got two of them from Stephen Gostkowski. First, he missed a 48-yard field goal attempt after being perfect kicking inside 50 yards since Week 2. Second, his last kickoff went out of bounds and gave the Dolphins a short field on what ended up being the go-ahead touchdown drive. Gostkowski hadn't had any other kickoffs go out of bounds this year and was second in the league in touchbacks.

Time of Death: The Eagles cut the lead to five just before the start of the fourth quarter but couldn't get a stop on the next drive, letting Matt Cassel throw for 53 yards before Matt Asiata scored the second of his three touchdowns.

Cause of Death: "Closing Time." "All My Life." "Gettin' Jiggy Wit' It." These are some of the most popular songs from 1998, the last year in which the Vikings scored 48 points. Of course, if you want to find the last time Philadelphia gave up 48 points, you need only go back 11 weeks. Every team in the NFC East is in the bottom half of the league in scoring defense, but the division winner will still make the playoffs because the NFL is teaching kids that there are no consequences in life.

Cause of Death: Thanks to stylish gentleman/Seahawks fan/general antagonist Matt Ufford, I learned that the Giants didn't cross midfield until halfway through the fourth quarter. See for yourself! 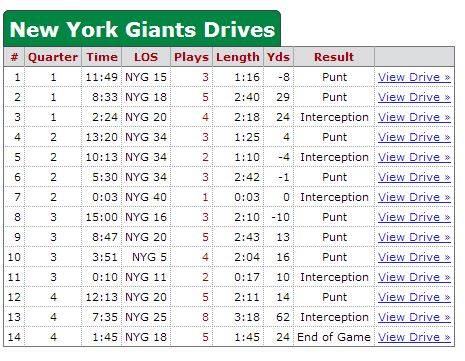 Oh, you noticed those five drives that ended in interceptions? Those give Eli 25 picks for the year, and make him only the second quarterback in the last 30 years with two 25+ interception seasons. The first is another New York legend: Vinny Testaverde.

Time of Death: When you're down nine with less than five minutes to play, you don't need safe. You don't need conservative. You need ... SCHIANO FIRE.

(SCHIANO FIRE is not approved by the FDA for use by women or children. Ask your doctor before using SCHIANO FIRE. SCHIANO FIRE may cause you to grow an alarming amount of hair on your chest.)

Cause of Death: Third down is such a meaningless endeavor for the Bucs, who only converted one of 10 tries against San Francisco and averaged less than a yard per third down play. Only the Jags and Giants have a worse conversion rate this season. Only the Jags have given up more third down sacks. Greg Schiano's fitness equipment infomercial bravado is entirely appropriate, because the product he's selling you won't actually get you any results.

Time of Death: Five yards away from a touchdown that would have tied the game with about three minutes left, Chad Henne and Jordan Todman found themselves running different plays and Henne's pass was picked off.

Cause of Death: The Jaguars weren't able to effectively shut down the Buffalo running attack, giving up 16 rushing plays that gained at least five yards. Half of those came in the second quarter, when the Bills held the ball for nearly 10 minutes and scored 17 straight points.

Time of Death: It'd be too easy to pick one of the four touchdowns Jamaal Charles scored in the first half, so let's go with Eric Berry's pick six that gave the Chiefs an 18 point lead less than 10 minutes into the game.

Cause of Death: Maybe this is a bold claim, but giving up 35 points in the first half is not a good strategy. No team that's hit that total by the end of the second quarter has won since 1980, and even when the Raiders mounted a charge and scored 21 unanswered, they still found themselves trailing.

Time of Death: Geno Smith's 21st interception of the year (the New York City teams have 48, and the entire NFC West has 41) was run back for a touchdown by Captain Munnerlyn, putting the Panthers up 17 midway through the fourth quarter.

Cause of Death: Since 1980, only three rookie quarterbacks have thrown 20 interceptions in a season — Peyton Manning, Matt Stafford and Mark Sanchez. That's quite a spectrum, but you can differentiate the three by their percent of passes intercepted that year; Manning was lowest at 4.5 percent, Stafford was next at 5.3 percent, and Sanchez was the highest at 5.5 percent.

(Look away now if you're a Jets fan.)

Time of Death: You probably haven't heard much about it, but the last Dallas possession ended with a Tony Romo interception. These things happen to everyone, naturally.

Cause of Death: The Packers had five drives in the second half and scored (drum roll) five touchdowns. For the season, the Cowboys have allowed 27 second-half touchdowns — more than the Seahawks, Panthers, Ravens, 49ers, and Bengals have given up in both halves of their games. Calling this defense a sieve would be inaccurate, because a sieve isn't composed entirely of holes.

Time of Death: The Titans pulled off a nearly impossible feat when they scored 17 points in the last 3:12 to send the game to overtime, but once they got there, Ryan Fitzpatrick threw a pick on the third play and gave the Cardinals a short field to drive for the winning field goal.

Cause of Death: Fitzpatrick didn't have a bad game, tallying four touchdowns and more than 400 yards, but throwing the ball 58 times would not appear to be the best approach for the Titans right now. When Fitzpatrick has more than 30 passing attempts, his teams are 7-36-1. When he keeps it to 30 or below, his record improves to 20-14. Less Ryan Fitzpatrick, Tennessee. Embrace it as your rallying cry.

Time of Death: Any chance the Saints had to pull off a miracle comeback evaporated when Garrett Hartley missed a 26 yard field goal with just under two minutes to play.

Cause of Death: New Orleans spent most of the game facing a long march to the end zone; until they recovered the onside kick that preceded Hartley's late miss, the Saints had an average drive start position of their own 21 yard line. The Rams, on the other hand, had an average starting field position at their own 32 and had four drives that began at their own 40 or better.

Time of Death: Down by 10, the Bengals couldn't get a stop on 3rd and 7 with five minutes left, allowing the Steelers to run an extra two minutes off the clock before punting the ball away.

Cause of Death: Andy Dalton was terrible in the first half — 7-for-17 for 65 yards and no touchdowns — and he's been prone to slow starts this year. Dalton is tied with Eli Manning for most first-half interceptions thrown (11), and his completion percentage in the first half puts him below Brandon Weeden, E.J. Manuel, and Chad Henne.

Time of Death: If there is a football form of death by a thousand cuts, it is likely watching your team give up no touchdowns but still lose thanks to six field goals, capped by Justin Tucker's 61-yard attempt that put Baltimore ahead for good.

Cause of Death: As glaring as the errors were in Detroit's passing attack, the running game fell off a cliff in the second half. The Lions ran 12 times for more than five yards a carry in quarters one and two, then averaged only 3.3 yards per run in quarters three and four. The drop was even more glaring on first down, where the Lions only got 2.82 yards a carry in the second half. It's not your fault, Matthew Stafford, but go ahead and shotgun beers like it is.

• Debrief: Brady and the Patriots run out of luck (for now)