What is the 'nail'? The key to help defense

NBA help defense is a complex thing, but almost all great schemes center around several core concepts. This week, we talk about the one spot on the floor that is more important than any other.

Share All sharing options for: What is the 'nail'? The key to help defense

Editor's Note: Doug Eberhardt is a coach and skill development trainer that has worked with Mike D'Antoni and Lionel Hollins, among others. This is the second edition of a weekly feature he will do for SBNation.com during the season. Read last week's here. You can follow Doug on Twitter at @ebehoops.

This week, we'll be discussing another piece of jargon that teams use: the "nail."

What is the "nail?" One of the key defensive spots on the floor, where teams can literally help stop middle penetration and figuratively shout out their defensive philosophy. The nail is located at the very middle of the free throw line: 15 feet from the middle of the basket, eight feet from the edge of each side of the NBA key.

Why is it called the nail? If you head to your local high school or recreation center gym, walk to the free throw line, center yourself and look down, you'll see a small indentation mark or hole on the line's paint. That little hole or mark was once the home of a galvanized piece of metal. A real physical nail, straight from your local hardware store. That nail was used to anchor a string, which in turn helped the builders of the court measure dimensions (key, free throw, three-point, etc.) and paint the various lines.

Once upon a time, my brother -- the Flamboyant Coach -- and I used the nail mark to teach young players at our basketball camps how to center themselves on free throws. But in the NBA, the nail is used to center help defenders. You'll hear coaches imploring their defenders on the top of the weak side to "get to the nail! Get to the nail!"

This is especially against wing pick and rolls and post-ups. The player at the nail is the help and recover man (or should be the help and recover man, depending on your defensive scheme). It's usually a guard or a wing defender. His job is to muck up driving angles into the paint while staying within reach to recover and close out on his own man. 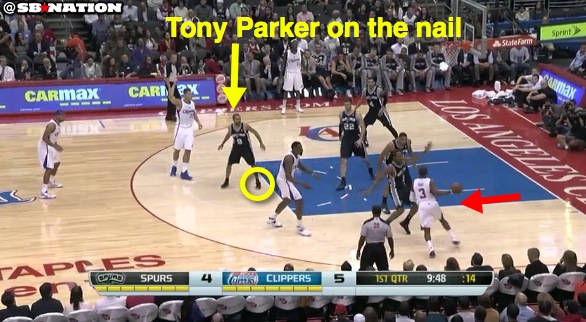 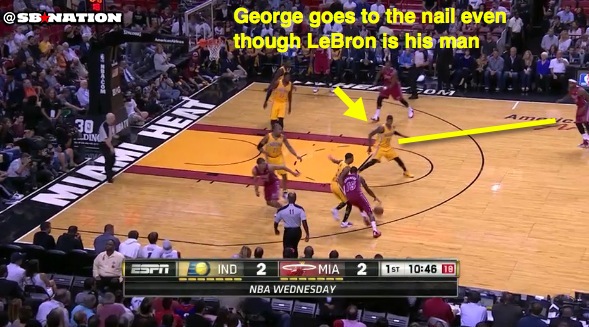 The defender at the nail is also in a precarious position, as his own man is usually just one pass away from the action (though not in this case). Help too much or lose track of your check, and the team gets burned, usually with an open three-pointer. Being positioned at the nail also opens up getting slammed with back screens when the ball is reversed, which appears to be happening in the top screenshot with Blake Griffin.

You'll usually see a strong nail presence on teams that don't double-team the post, teams that drop a big man back into the paint on wing pick and roll coverage, teams that simply don't double team the ball on pick and roll and teams that play defense through the middle of the floor. Think top defensive clubs like San Antonio Spurs, Indiana Pacers and the Memphis Grizzlies.

The concept of the "nail" is evolving as new data emerges. Last season, SportVU data and modeling being used by the Toronto Raptors was uncovered by Grantland's Zach Lowe. Using a complex algorithm of player tendencies, the Raptors created a set of "ghost defenders" that signified the optimal help defensive positioning against almost every player and play in the league. The result: The "ghost defenders" were actually much more aggressive in their positioning than their actual Raptors counterparts. In theory, the man moving to and shouting out "nail, nail, nail!" could probably be even more aggressive in getting to the help position early. In reality, with some many moving parts, it remains a very tough spot for most defenders to help and then recover properly.

To be in a help position at the nail means you need to be aware, active and disciplined enough to recover quickly to your man when every neuron in your brain is telling you to stay at the spot and corral the ball handler. Strong help at the nail limits (or eliminates) rotations, which make everyone's defensive lives a little easier.

It also helps if you're smart, long, quick and physical. I guess that makes Kawhi Leonard the prototype nail defender.

Atlanta comes out of their timeout with a very interesting lineup, subbing in little-used Pero Antic to throw the ball inbounds. With four Atlanta big men and a three-point point machine, Kyle Korver, the Wizards had to ask themselves, "Are the Hawks going for the lob with all of these bigs or a misdirection jump shot, using the big men to screen?" Given that there was 1.8 seconds remaining in overtime, there was more than enough time for either action to run its course.

The Wizards choose not to guard Antic, the man inbounding the ball, instead dropping Garrett Temple back into coverage. I always dislike this strategy in the frontcourt because it not only makes the pass easier, but there is no time for the ‘rover' to recover defensively if his teammates gets caught on the various screens and switches. Don't give the passer a free and clear look. 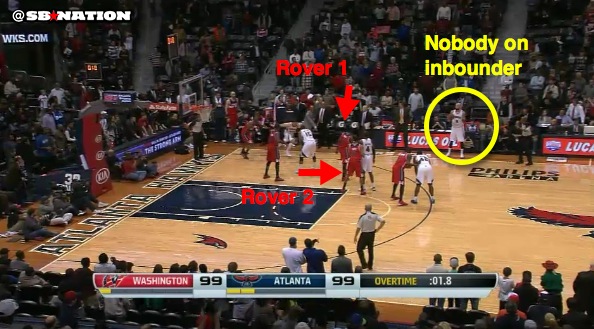 The Hawks setup a straight line facing Kyle Korver in the corner. (Shout out to the Korver family naming system). Korver goes hard over the picket fence, getting ready for his Jimmy Chitwood moment. The Wiz anticipates this series of actions and switches all of the screens. So far, so good. 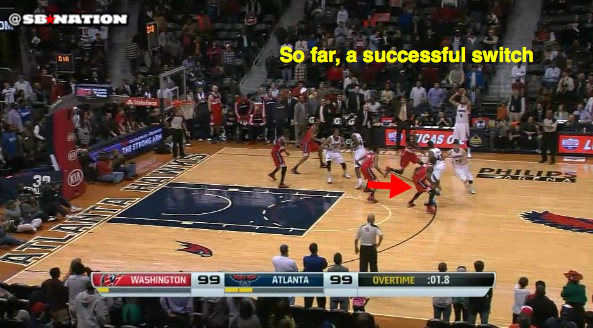 After setting the first Korver screen, Al Horford turns to set a step-up screen for Paul Millsap. With Washington already into their switches, Horford basically has air to screen and peels off with a slip to the hoop, in a straight line with the passer, Antic. 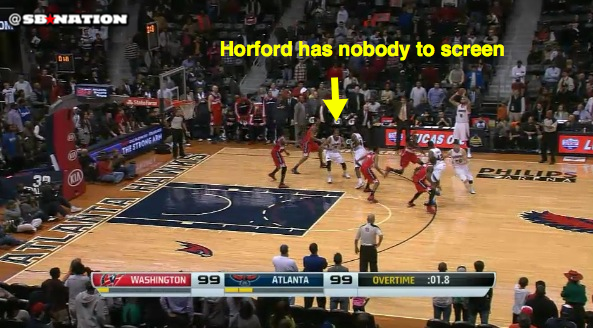 Here's where it gets hazy for the Wizards. For some reason, Trevor Booker allows Tito Jr. to cut straight past him without any contact and towards the far corner of the backboard. This, of course, is the exact spot the lob pass is going to come. 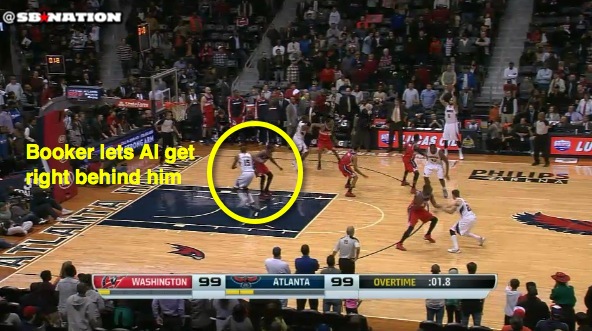 Another little takeaway from Atlanta's game winner: Temple, Washington's ‘rover', remains in no man's land for most of the play. If you're Wittman, wouldn't you rather have him up on Antic, making the sideline pass more difficult? Or even better, sub Marcin Gortat into the game and let him and Antic have a pro wrestler stare-off at the hash mark? 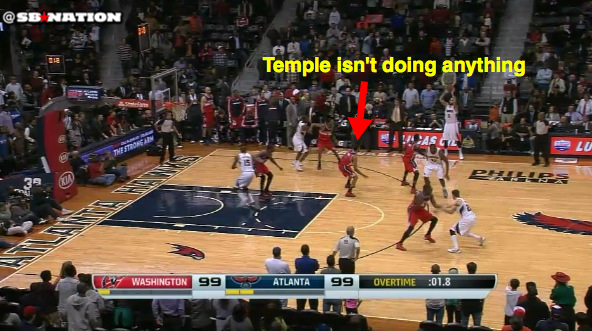 Almost more interesting to me than the game-winning pass and shot is the secondary action that the Hawks ran on this ATO. If you go back over the film, Zapruder-like, you'll see Korver come off of the last Elton Brand screen fading away from the inbound passer. However, this is just to set-up Brand turning and screening Korver cutting back over the top looking for the pass and a potential game winning jump shot. If Antic hadn't already made the lob pass, Korver was going to be wide open at the three-point line.

Watch John Wall. He chases Korver until it's time to switch off with Martell Webster. At that point, Wall starts ball- watching. Brand turns and rescreens Webster, which results in Korver popping free in my alternate universe of game winning shots. 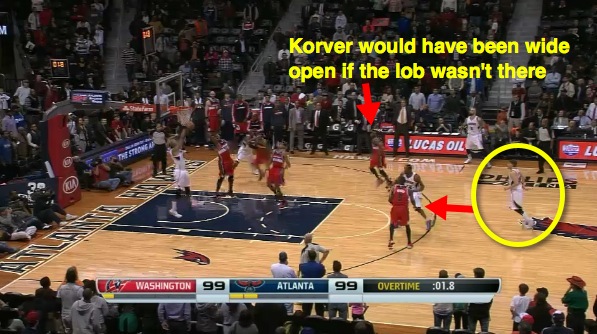 I bring this separate play-within-the-play screen to your attention because it's a Spurs staple. Gregg Popovich. Mike Budenholzer. The coaching tree of Pomona continues to grow across the NBA.

• How Kevin Love is reviving the Timberwolves