Predict the next time the Yankees will be awful

Share All sharing options for: Predict the next time the Yankees will be awful

I decided to write about the Yankees before knowing exactly what I wanted to write. There are a lot of different angles. How they'd be better off with Alex Rodriguez suspended for the year. How Alex Rodriguez would make the lineup better than people are giving him credit for. The Joel Sherman column in which a member of the Yankees organization suggests being a little over the luxury-tax threshold is like being a little pregnant.

The Yankees are fascinating.

When I look at the Yankees, I think of that "SOON" meme that came and went a couple years ago. 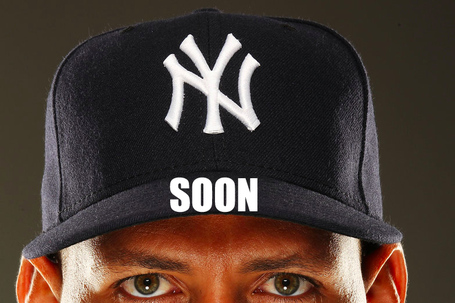 Right, right, that one. Because for the last 15 years or so, a majority of baseball fans have been waiting for the Yankees to hit a patch of black ice the way every other team does. Soon. The Yankees will get theirs. Soon. You'll see. Soon.

It should happen. The Yankees have employed a predictable paradigm over the last two years. It's a three-parter. Ready?

If you're wondering what a hey-I've-heard-of-that-guy is, here's a partial list: Brian Roberts, Kelly Johnson, Eric Chavez, Derek Lowe, Freddy Garcia, Travis Hafner, Mark Reynolds, Lyle Overbay, Raul Ibanez, and Andruw Jones. That's a pretty impressive list. That was the list from the last two years. Seriously, I didn't even have to dig beyond 2012 to build a stellar hey-I've-heard-of-that-guy list.

The three-point plan should fail almost as often as it works. Star players should crater as they reach their twilight years. That's exactly what happened to the Yankees. Alex Rodriguez, Mark Teixeira, CC Sabathia, and Derek Jeter combined to make just over $90 million last season. They combined for -0.1 WAR. So, ha, the Yankees' blueprint is flawed. The jerks.

Every so often, the internal options shouldn't come through. There should be a dry spell, a dearth of talent, a complete void of viable farm products. It happens to everyone.

Yet the Yankees always seem to have an Ivan Nova or David Phelps to qualify for the just-enough brigade.

The hey-I've-heard-of-that-guy guys shouldn't work. And they don't, more often than not. Even though Chavez and Garcia were relative successes, it's not like the Yankees are magic. Lyle Overbay was Lyle Overbay, nothing more, nothing less. Those kinds of players weren't enough to lift the Royals or Pirates into contention over most of the last decade. So there's no reason they should help the Yankees.

Yet the Yankees always seem to get a surprising amount of production from should-be-decrepit sources. Bartolo Colon was a medical curiosity until he was helping the Yankees win. Now he's on a multi-year deal.

So I want you to help me predict the next completely dismal Yankees season. We're talking the kind of season we saw from the '09 Mets or '13 Giants, the kind of disappointing season that makes you stop and realize everything's different. The '07 White Sox or '02 Cubs. Heck, even the Braves had '06 and the Cardinals had '07. Every team has that season, in which everything goes wrong.

Except for the Yankees. Do you realize their Pythagorean record was 79-93 last year? But they persevered and did much better than that. It's about time they caught a few breaks. Last year should have been the miserable year, but of course it wasn't. It never is.

But after that, it's pain.

There's no way they can keep this unsustainable organizational blueprint going.

No way. Next year is totally the last year of this. You'll see. You'll all see. It's not like they're going to trade for Jayson Werth's last moldering years and have it all work out. Because that would be ridiculous.

It would also be the Yankees. Man, these guys are fascinating.