Share All sharing options for: Carlos Santana taking grounders at third base?

The Indians, bless 'em, are making the last bit of 2013 interesting. According to Paul Hoynes, Carlos Santana is taking grounders at third in winter ball.

How serious are the Indians about this?

Infield coach Mike Sarbaugh and scout Trey Hendricks in the Dominican working with Carlos Santana at third base. #Indians.

Serious enough to send members of the organization to help and report back. The early returns are about what you'd expect. Five games, three errors. Playing the hot corner isn't easy, especially when the player in question has fielded just 150 chances at third in his professional career, with most of them coming when he was a teenager.

Right now, if you're an Indians fan, you're thinking about Miguel Cabrera. He's rummaging around in your brain like the Stay Puft Marshmallow Man, even as you're trying not to think of him. You're getting sad. And that's before you consider that Cabrera wasn't really that bad at his return to third, considering. Then remember that he had a ton of professional experience at the position, and that his conversion was much more likely to succeed than Santana's.

But if you're looking for optimism, think about Pablo Sandoval, who had 105 games at third in the low minors compared to Santana's 58. There was no reason for Sandoval to work out at third, especially when you get to his … unique physical geometry. But it worked out. Sandoval's had an up-and-down career at third defensively, but the ups are quite up. He was a Gold Glove finalist in 2011, and he deserved to be.

That's the spectrum, then. Either Santana's like Miguel Cabrera -- bad, but acceptable -- or he's like Pablo Sandoval, who's done quite well over there. Either way, the Indians get Yan Gomes in the lineup! They win!

Except there's dark territory at the edge of the spectrum. It's littered with experiments that were never revealed to the public. Remember the Yonder Alonso-to-third experiment? Of course you don't.

"When I got to college at Miami, Ryan Braun was at third base. That's why I moved to first base," Alonso said. "I started playing third my sophomore year and Danny Valencia came. He's now with Minnesota. Those were two pretty good third basemen."

You don't remember it because compared to Alonso, Ryan Braun actually was a "pretty good third baseman." Apropos of nothing, here's a GIF of Yonder Alonso's only attempted play as a second baseman in the pros:

What are the numbers on that, computer?

But those probably aren't park adjusted or something.

The Alonso career path is almost certainly what's going to happen with Santana. You're going to forget the experiment ever existed. This is old, but it took me hours to research, so danged if I'm updating it. It's still relevant: 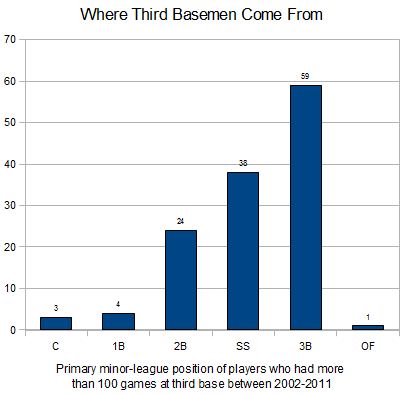 The catchers were Pablo Sandoval (successful), Brandon Inge (extremely successful) and Todd Zeile (pretty lousy), in case you were wondering. Maybe that means something. It's probably just small samples playing tricks on us. But if you consider Santana more of a first baseman now, the four first basemen up there were Shea Hillenbrand, Robb Quinlan, Eric Munson and Herb Perry.

Third basemen are infielders in the minors. There are hardly any exceptions.

You can't fault the Indians for checking in on the experiment, though. You know what's way more dangerous than playing Carlos Santana out of position at third base? Letting him play an inning at catcher. I'm not sure if getting David Cooper or Jason Giambi (or David Adams or Ryan Raburn or ...) in at DH will ever be worth the defensive drop-off. But it's worth a shot. Pablo Sandoval shouldn't have worked. But he did. Winter ball seems like a pretty good time to figure that out.